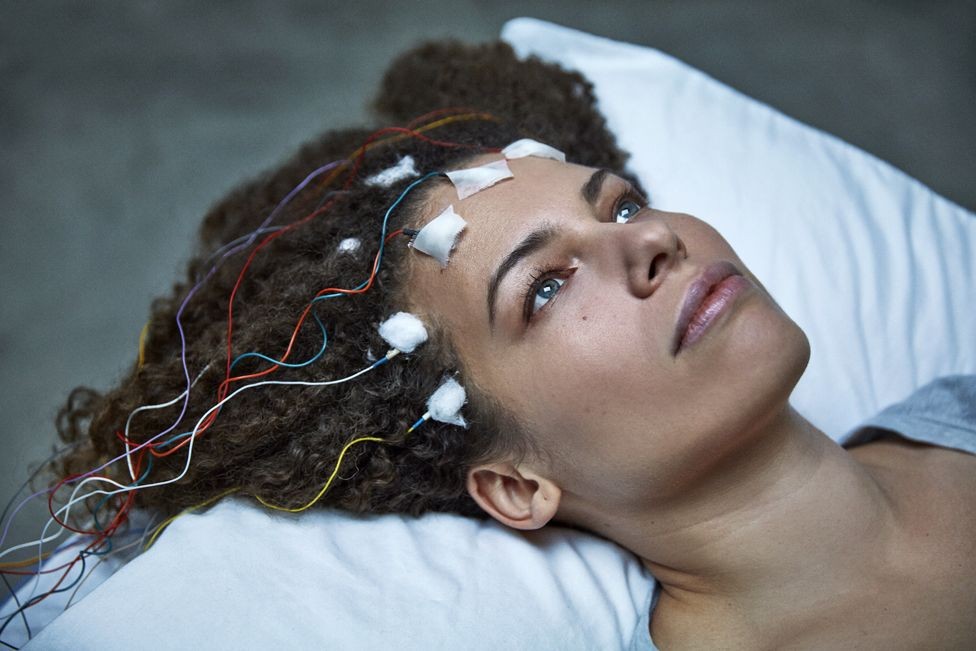 Five years ago, Jennifer Brea was struck down by ME (Myalgic Encephalomyelitis), and found herself bed-bound, a prisoner in her own body. Now, she has invited the world on an intimate journey into a condition that some deny even exists, interviewing fellow patients from all over the world – from her sickbed. She spoke to the BBC’s Natasha Lipman.

As the opening credits roll on the documentary, Unrest, we see filmmaker Jennifer Brea lying on the floor of her bedroom, eyes glazed over, as she stares apparently peacefully at the camera. Then, with arms shaking, gasping for breath, she tries to pull herself up, managing only a few inches before she collapses back on the floor. Eventually she is able to crawl slowly to her bed, before dropping the camera, collapsing with relief and fatigue.

Episodes like this initially came as a shock for Brea. Seemingly out of nowhere, she would suddenly lose all muscle force, unable to move her body, or even lift her head. She struggled to get words out, let alone form sentences, and even the smallest exertion would have knock-on effects that lasted for days, weeks, or even months.

I never imagined that something like this could happen to me

“I’d never been sick before and so I had this sense of abundance of health and body and life. I had never really heard about ME or people becoming ill in their 20s – it just wasn’t a part of my awareness. So I never imagined that something like this could happen to me.”

While studying for a PhD in Political Economy and Statistics at Harvard, she met fellow student, Omar Wasow, an internet analyst and entrepreneur who once taught Oprah Winfrey how to surf the net. They married in 2012. Home videos show the life Brea and Wasow led before she became sick – travelling the world, scuba diving, candlelit dinners with friends – a perfect vision of a carefree young couple in love.

Shortly before their wedding, they both contracted a virus, coming down with a high fever. Wasow recovered completely, but afterwards Brea remained plagued by strange symptoms. Whenever she got a sore throat or a cold she would have dizzy spells and crash out for days at a time. She suffered from insomnia, and memory loss – symptoms she now recognises as a mild form of ME. They all seemed to get worse after exercise.

“Omar and I used to always do this bike ride along the river – six miles out, six miles back -and I noticed that while I could make it six miles out, then I had to call a taxi to get back home. Or I would go skiing with my family, and suddenly feel my legs giving out,” she says.

She suspected there might be something wrong with her immune system and went to her doctor, but the lab tests always came back normal.

“I was told that either I wasn’t really sick or that maybe I was just depressed or that it was all in my head,” she says.

Brea was eventually diagnosed with Conversion Disorder, a mental condition with unexplained physical symptoms – formerly known as hysteria – and told it was due to a childhood trauma she couldn’t even remember.

It wasn’t until she showed doctors the disturbing footage of her symptoms from the video diary she’d been recording on her phone that she was sent for a battery of physical tests.

“I still had hope that I just had a rare disease – that if I could just get to the right specialist they would figure out what was wrong with me,” says Brea.

It turned out that what she had is actually very common – ME, a condition that affects up to 17 million people worldwide, according to some estimates. Now her illness had a name, but she discovered that there was very little medical research into it, much controversy over treatments, and no cure.

“That was something that I never imagined could happen. I always thought that medicine would be there to help me,” says Brea. “In some ways getting the diagnosis was a bit of a relief but it also gave me this sense of: ‘Oh my gosh, what I have to deal with is actually much more complicated than I imagined.'”

ME has always caused debate. Brea’s film shows clips of US TV host Larry King calling it “yuppie flu”, and TV anchor Katie Couric describing it as “a made-up condition”. Patients are battling against this perception in both the medical community and society as a whole.

“It’s not just about the disease itself, it’s also about those layers of stigma and lack of understanding,” says Brea.

For nearly two years, she was too ill to get out of bed for more than 10 minutes a day.

“I spent a lot of time wondering: ‘If I never leave this bedroom again, if I can’t read, write or think, then who am I? What value does my life have? What purpose or meaning does it have to even keep existing, if I am living a life that is this limited?'”

She describes ME as a “perfect prison”, custom-made for each sufferer.

“It doesn’t matter what you once were, it removes your ability to exert yourself and be a part of the world.

“If you were an accountant then you might find that you can no longer add and subtract, if you’re a mother you can’t be there for your children the way you want, if you are an athlete or a teacher, that’s impossible. Everything becomes impossible.”

Wasow admits there have been times where he has found her condition incredibly difficult, particularly in the beginning. “The person I’d fallen in love with was sort of fading before my eyes,” he says.

I am the one that has been confined to this prison. He can choose to do whatever he wants

This wasn’t lost on Brea, as the film explores her guilt. At one point she cries: “I’m nothing. I can’t give you anything.”

She explains: “I am the one that has been confined to this prison. He can choose to travel the world and do whatever he wants with the freedom of the body he has. Even though I didn’t choose this, his life has been altered because of this thing that’s happened to me.”

“Fundamentally what I get from our relationship is her company,” says Wasow. “The fact that her mind is as sharp and vibrant and interesting as it was when I first met her means that I still feel quite lucky.”

Brea feels lucky too, even though there are days where her mind feels far from sharp. But she points out that it is still seen as exceptional for a man to stay and look after a woman.

“If he were sick and I had stayed to care for him, I don’t think people would look at me as a hero,” she says.

By its nature, ME is extremely isolating. Many sufferers are stuck in their beds, invisible to the outside world, and the medical establishment. As time went by, and she found herself in limbo – with limited treatment options – Brea realised she needed to come to terms with her new life, and find purpose and happiness. One of the main driving forces behind this change was discovering the online ME community, some members of which had been living in their beds for five, 10, even 20 years.

As she made friends with fellow patients, she decided to film their stories. With a little bit of creative thinking, videoconferencing software and a tablet, she was able to interview and direct film crews from her bed, saving her the month-long recovery that a day of filming would usually necessitate.

Her camera was wheeled into bedrooms across the world, into intimate spaces where few but the patient’s family and carers had ever been, to film the reality of a disease that is usually hidden behind closed doors.

“The key symptom we share is that whenever we exert ourselves, physically or mentally, we pay and we pay hard,” she says.

But much of what Brea saw gave her hope for the future.

Meanwhile, the desperate situations she witnessed gave her a new sense of purpose.

“Once I started to realise just how many people had been living trapped in their homes or bedrooms and really marginalised by medicine and science, then I started to conceive of this as a social justice issue.

“It wasn’t about me, it was about the fact that there were so many of us, and what could I do for all of us to try to start to make some progress.”

Physically, Brea has made some progress. She says she has benefited from drug therapies being trialled in the US, including anti-viral drugs that were first developed for HIV, and a drug used to treat auto-immune conditions. From having been bed-bound 99% of the time, she is now travelling round the world to talk about Unrest.

Making the film accessible to people who may be housebound has been important to Brea, and she has used video-chat software to host online question and answer sessions with the audience. The response has been positive. “What I’ve started to see happen is that patients feel like they can share their experiences, come out and be more public.”

She hopes it will unite patients and scientists in a search for answers.

“It’s not until we have a consensus that not only is this disease real, but it is debilitating and has been neglected, that we are going to see the investment and research that we need,” she says.

Looking back now, Brea wishes she had listened to her own body more.

“I wish I had understood how much exertion was harming me. I think if I had completely rested right after my infection, I might have recovered. Those signals of pain or fatigue are your body trying to tell you something – I wish I had listened to myself.”

Jessica, who features in Jennifer Brea’s documentary, was bedridden for 10 years with ME and osteoporosis. She was told that she’d never be on her feet again, but she made it her mission to walk to the altar on her wedding day.

Portrait of Jen and Omar by Phil Coomes