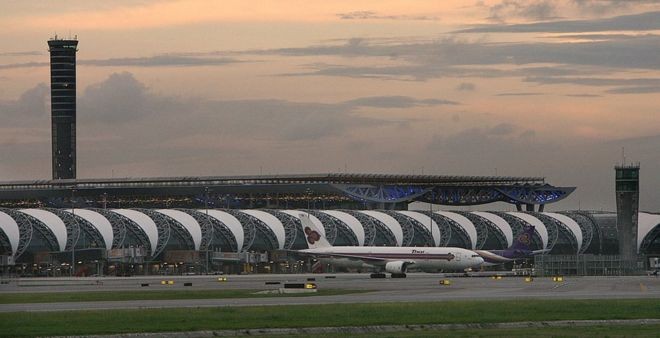 No-one really enjoys a long airport stopover, but for one Zimbabwean family, Bangkok’s main airport has been home for nearly three months.

According to the Thai immigration bureau, the four children under 11 and four adults arrived in Bangkok in May, but are refusing to return to Zimbabwe for fear of persecution.

Their plight came to light after someone who said he worked at Suvarnabhumi airport posted a photo on Facebook showing himself giving a little African girl a Christmas present.

In the now deleted post, Kanaruj Artt Pornsopit said the family had been living in the airport for nearly three months “because of the unsettled situation” in their country.

“Hope all of you back to your sweet home soon”, he said.

Immigration bureau spokesman Pol Col Cherngron Rimphadee told the BBC the family initially arrived in Thailand as tourists. They attempted to fly out of Bangkok in October to the Spanish city of Barcelona via Kiev in Ukraine.

But they were denied boarding because they did not have visas to enter Spain.

However, they were also unable to re-enter Thailand as they had overstayed their initial tourist visas by five months and had to pay a hefty fine.

They later made arrangements with Ukraine International Airlines (UIA) to fly via Kiev to Dubai instead – and then on to a third country – bypassing European immigration.

However, according to a UIA spokesperson, the family cancelled their tickets for the final leg of their journey, leading them to be sent back from Dubai to Bangkok.

The family have refused to be sent back to Zimbabwe, saying they feared “persecution” after the November unrest which saw the removal of 37-year leader Robert Mugabe.

However, there is currently no open instability in Zimbabwe, so some in the country have cast doubts on the family’s claim of persecution.

Col Rimphahdee confirmed the family had applied to the UN for asylum, but for now were living in Suvarnabhumi airport and being looked after and fed by airport staff.

He told the BBC’s Thai Service that the UN’s refugee agency, UNHCR, had “requested” that the family remain in Thailand as it was “working on a process… to send them to a third country”.

A UNCHR spokesperson said they were “currently exploring solutions” but could not provide any further details or confirmation.

Thailand does not provide legal status to refugees and asylum seekers.

The family’s situation has been likened to the film The Terminal, in which actor Tom Hanks plays a man who is trapped in a New York airport.

The film is based on the real life story of Iranian Mehran Karimi Nasseri, who lived in Roissy-Charles de Gaulle airport in Paris for 18 years when he found himself caught in diplomatic limbo.

But Col Rimphadee said: “Please try not to compare this to the movie. Their situation is not as dramatic… actually they have plenty of options.”

“They could travel to other countries that are willing to take them… We also offered to relocate them to our holding centre where there is childcare. But they refused. They are happy to stay here.”

I made a film from my bed to show my illness is real
How Jacob Zuma’s presidency shaped South African speech
2017 ‘very likely’ in top three warmest years on record
After IS, Libya yearns for normality
Heartless mother buries her 3 month old son alive just so she could be with a ‘rich man’
Migrant crisis: ‘I was sold three times by slave traders’
This Is How You Can Differentiate Between Swedish & British Nightclubs
US to stop arming anti-IS Syrian Kurdish YPG militia – Turkey
Central Africa Republic: The country with no teachers
Nigeria’s love affair with a Norwegian fish
Pierre-Emerick Aubameyang: How Afoty nominee helped put Gabon on the map
Praljak: Bosnian Croat war criminal dies after taking poison in court
Kim Kardashian and Kanye West Enjoy Date Night Before Baby No. 3’s Arrival
Zimbabwe: Emmerson Mnangagwa to succeed Mugabe as president
Zimbabwe politics: Mugabe sacks ‘disloyal’ Mnangagwa
Getting Nigeria’s railways back on track with China’s help
United Airlines Officers fired following probe of passenger removal The city of Chicago revealed Tuesday that it fired two airport police officers in connection with the controversial removal of a passenger from a United Airlines plane earlier this year.
Bronx fire: Twelve dead in New York apartment block blaze
Prince Harry: Stars were aligned when I met Meghan