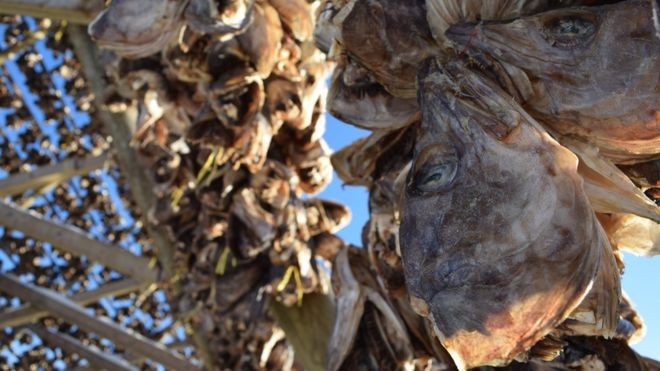 The taste of stockfish is life… We can’t cook without stockfish.”

That’s the verdict of women at the bustling Onyingbo market in Nigeria’s commercial capital, Lagos, as they carefully choose pieces of the specially dried cod.

Heads stare up from market stalls while whole bodies hanging on metal hooks sway in the humid breeze. Bundles of the golden-coloured fish have been cut into different sizes and are sold by weight.

The smell of stockfish is pungent and clings to the back of your throat. No wonder; the fish has been hung up to dry for three months until it is as dry as a tree bark.

As the moisture drips out, the flavour of the fish deepens to create a rich, intense and complex taste.

It is perfect for a Nigerian palate, which favours big and bold flavours such as fermented locust beans and chilli pepper, says young chef Michael Elegbde.

Based in Lagos, Mr Elegbde is a rising star in Nigeria’s culinary world – and his signature dishes revolve around stockfish. Growing up, he spent a lot of time helping his grandmother in the kitchen, and she loved stockfish as a key ingredient in traditional dishes.

“When we got home and we smelled the boiling stockfish we knew grandma is cooking, and now when I smell stockfish that nostalgia of my grandmother immediately kicks into my head,” he recalls.

But it was only later in life – when he had followed in his grandmother’s cooking footsteps – that he discovered the fish that he had grown up with actually came from almost half-way round the world, in the cold Arctic waters off the coast of Norway.

“As a kid I was never told that this stockfish was something from Norway. It was so common that I couldn’t imagine it not being Nigerian.”

Before Norway discovered oil and natural gas, its wealth was built on fisheries. Today fish exports are Norway’s second highest earner, with stockfish going to Nigeria a hugely important element in this trade.

The archipelago of Lofoten – up in the far north of Norway – has the biggest concentration of stockfish producers in the world.

That is because every year between January and April, millions of cod migrate from the Barents Sea to breed in the fjords – and the climate is perfect for the natural drying process.

“You need both cold and dry weather, and you need sun. We have everything here. We are gifted from God,” laughs Erling Falchs, whose family business Saga Fisk has been in the stockfish trade for six generations.

After gutting, cod is hung out on huge wooden A-frames, up to 10 metres high, and left to dry for three months in in the cold, crisp winter air. No salt, no additives – just in the same way that it has been dried since the time of the Vikings.

Although Nigeria has a long coastline teeming with other species of fish, people say the stockfish has a unique taste and so it is Norway’s biggest export market for the fish.

The past few years have been volatile, however. As the price of Nigeria’s main source of income – oil – fell, the government restricted access to foreign exchange. Stockfish imports fell as a consequence.

But the market is bouncing back. Last year, exports to Nigeria have almost doubled to just over 7,000 tonnes.

And it is not just Nigeria that Norway is targeting.

As Nigerians have settled in other West African countries – including Benin, Togo, Ghana and Cameroon – they have taken their beloved stockfish with them. And the taste for stockfish is slowly spreading.

So how did stockfish first arrive on Nigerian shores?

The process of drying it means that stockfish can last for years – and that made it perfect to be used as food for the West African people enslaved and sent on long sea voyages to the Americas, says Norwegian historian Frank Jensen.

But, as Mr Jensen points out, it was the Biafran civil war in Nigeria 50 years that really set the scene for stockfish to become a must-have ingredient in Nigerian cuisine.

In the course of three bloody years, more than a million people died – mostly from hunger. It was a humanitarian crisis on an unprecedented scale, and churches and relief agencies from all over the world joined together to fly in emergency supplies.

It doesn’t need refrigeration, and it is full of protein and vitamins – perfect to combat kwashiorkor, the malnutrition that characterised the Biafran war.

“The single weapon against kwashiorkor was stockfish,” says Edwin Mofefe, who was five years old when the war broke out. “It was our medicine.”

For years Mr Mofefe couldn’t eat stockfish because it brought back too many harrowing memories of the war.

Now, finally, he can not only stomach it, he has come to adore it for the depth of flavouring it brings to his favourite egusi or melon seed soup.

Fifty years on, stockfish has turned from an emergency, life-saving ration into a staple food – and a key part of Nigerian culinary identity.

MTN, Airtel, Glo, 9mobile Telcos lose 14 million subscribers in one year It appears that there’s been a purge of the telcos in the past one year.
‘You should never have to choose between two good things, when both, together, make a perfect combination’ – BankyW shares wise words to the Okoye brothers
Tizeti partners Facebook to bring Nigerians affordable internet service The Express Wi-fi plans are affordable and range from N50 for 100MB to N2,000 for 10GB.
Nigeria Vs Argentina FIFA approve November 14 friendly
Madrid left back Marcelo in £437,000 tax charge
‘My government will improve aviation infrastructure’ – President Buhari
ManCrushMonday Anthony Joshua, the world’s newest boxing king Anthony Joshua is one of the biggest things in sports at the moment.
Nigeria to Play Argentina November 14, for W/Cup Friendly
ACCW: First Bank wins game two, meets GSP today
I watched several videos of Quadri, says Japanese star
ISIS Names Ronaldo, Messi, Neymar as Next Target
I made a film from my bed to show my illness is real
Christina Aguilera shares semi-nude throwback photos of herself
2017 ‘very likely’ in top three warmest years on record
Nigeria Police reject ranking as world’s worst
Why Nigerians are willing to die to get to italy

Ha, whose mother/sister or aunty is angrily flaunting her breasts on social media?