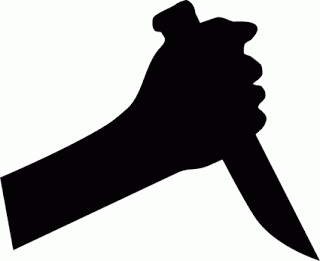 Magistrate Tajudeen Elias of the Ebute Metta Chief Magistrate Court has ordered that 16yr old Hanna Osazuwa be remanded in Ikoyi prison for stabbing her lover, 20yr old Tomide Akintewe to death. According to the police prosecutor, Sgt, Kehinde Omisakin, the accused committed the offence on Oct. 16 at 9.00 a.m. at No. 34, Road K, Close, Gowon Estate, Egbeda.

Hannah allegedly stabbed Tomide in the chest with a pair of scissors resulting in his bleeding to death. Under Lagos state Criminal law, the accused faces the death sentence if convicted but it is not clear if she is being tried as a minor or an adult. The case is set for resumption on December 12.

“Game of Thrones” Watch every death on GOT in fan-made compilation Every 174,373 death scene on “Game of Thrones” has been compiled by a fan of the show.
Kevin Spacey ‘House of Cards’ actor comes out as gay, apologizes after misconduct accusation Kevin Spacey came out as gay early Monday and apologized to actor Anthony Rapp, who accused the Hollywood star of making a sexual advance on him at a 1986 party.
In Poland Pole dies after setting himself on fire in protest Passers-by tried to put out the flames with fire extinguishers, but the man was rushed to hospital in a serious condition
In India Journalist shot dead in northern India: police A journalist was shot dead by three gunmen in northern India on Saturday, police said, the latest attack on media in one of Asia’s deadliest countries for reporters.
Nigerian Basketballer dies in the USA
Share
Facebook
Twitter
WhatsApp
Pinterest
Linkedin
ReddIt
Email
Print
Tumblr
Telegram
Mix
VK
Digg
LINE
Viber
Naver
Previous articleTyrese threatened The Rock’s daughters on social media
Next articleThe ass on actress Anita Joseph though……….