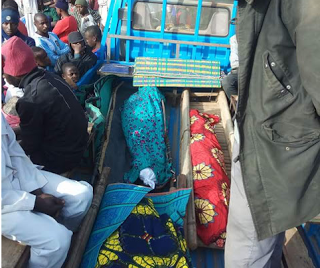 Tragedy struck at Madaki Street, Bukuru metropolis of Jos-South Local Government Area in Plateau State on Saturday after an early morning fire claimed the lives of a couple and their three children.

The deceased have been identified as 35-year-old Adam, his wife Maryam and their three kids; Abdul, Ibrahim and Fatima. The only surviving member of the family, Amina is said to be living with her grandparents.

An eyewitness said neighbours were alerted about the fire around 3:30am from the poorly constructed wooden kitchen of their one-bedroom apartment.

Another neighbour, Yusuf Abubakar, said they were finally able to put out the fire around 4am but the family had already been consumed. 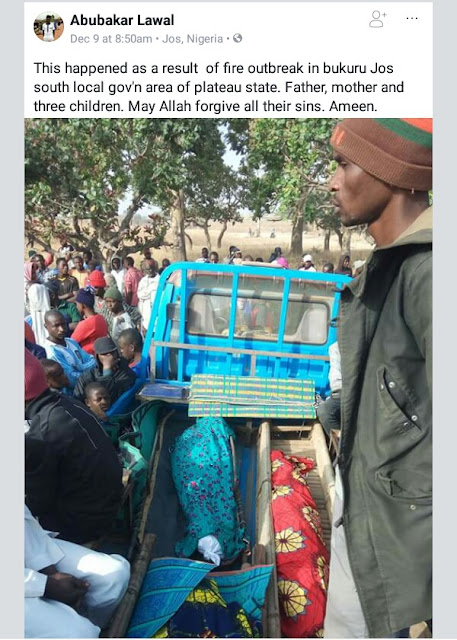 In Greece Authorities arrest suspect over letter bomb attacks Greek police said they arrested a suspect Saturday over a series of letter bomb attacks targeting the country’s creditors, one of which injured former prime minister Lucas Papademos earlier this year.
Social media What happens to a user’s account when he dies? The owners of the social media platforms have found ways to take care of such inevitable occurrence which users ought to be aware of.
I did it out of love and care” – Mother put her ‘naughty’ seven-year-old daughter in chains to protect her
Nelson Mandela funeral: ‘Millions misspent’
‘My husband tied me to tree’
5 kid-robbers arrested by OPC members while burgling shop A gang of kid-robbers who invaded a shop late in the night in Ogun State were saved from lynching by men of the OPC after they were caught.
Samsung Galaxy J7 smartphone reportedly blows up in mid-air flight The story is going by a possible theory that the user of that Samsung phone may have caused the incident.
Punk group attack ‘police state’ on Trump anniversary
At least 20 people shot as gunman opens fires during church service n Texas
2 men arrested for murder of 26 Nigerian girls, women killed in In Italy sea
DSS, EFCC Clash Sagay asks Magu to report to Buhari
Egg intake doesn’t cause heart attack – PAN
Virgins step out topless as they are initiated into womanhood during the Iria ceremony in Rivers state (photos)
House Passes Children’s Health Bill, Sending Measure to Senate

Cristiano Ronaldo Football star pays medical bill of 370 people affected by fire in Portugal Forest fires ravaged swathes of land in central Portugal for days leading to the death of over 40 persons.