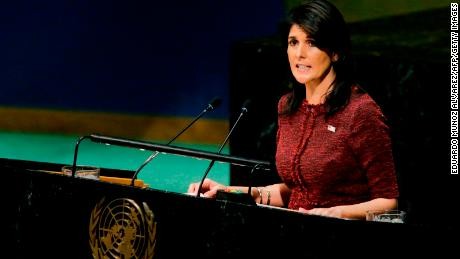 US Ambassador to the United Nations Nikki Haley on Sunday touted a quarter billion dollar cut to the UN’s annual budget, capping off a contentious year between the Trump administration and the international body.

“We will no longer let the generosity of the American people be taken advantage of or remain unchecked,” Haley said in a statement.
Haley said the US had negotiated a $285 million reduction of the UN budget for 2018-2019 compared to the budget for 2016-2017. Her announced total was $85 million more than the $200 million cut that a UN news article said UN Secretary General António Guterres backed in October.
The UN’s two-year budget is roughly $5.5 billion, and the total US contribution to the UN is more than any other nation. Haley’s statement did not mention how or if the US contribution will be altered.
Stephane Dujarric, a spokesman for Guterres, confirmed in a statement that the UN General Assembly on Sunday morning had approved cuts for the 2018-2019 period that would total about $286 million below the level for the last two years and touted support for a trial proposal to move to annual budgets.
A US official told CNN that the UN’s administrative and budget committee “agreed on a range of issues related to the UN’s regular budget, peacekeeping budget, oversight and management matters and reform initiatives.”
Among the points of agreement, the official said, included cuts with a “focus on bloated management and support functions and rationalizing services,” and adjusting budget levels for Darfur and Haiti. Earlier in the year, the UN reduced its peacekeeping role in Darfur, which caused concern among some human rights activists.
The US official said the agreement secured funding for political missions in Libya, Yemen, Colombia, Afghanistan, Iraq and elsewhere, as well as creating a special envoy for Myanmar. US Secretary of State Rex Tillerson last month said actions by Myanmar’s government against the Asian nation’s Rohingya Muslim minority amounted to “ethnic cleansing.”
Haley’s Christmas Eve announcement on cuts to the UN budget for 2018-2019 came days after the US exercised its first veto in years at the UN Security Council. Every other member of the body, including US allies, voted in favor of a proposal affirming international opposition to recognizing Jerusalem as Israel’s capital, days after President Donald Trump did so and declared the US would one day move its embassy from Tel Aviv to the contested holy city.
The UN General Assembly went on to vote on the same issue, passing a non-binding resolution disapproving of the Trump administration’s decision.
Ahead of the general assembly vote, Haley announced the US was “taking names” of those voting against the US, and afterward, she held a party where the only countries invited were nations that did not support the resolution on Jerusalem.
Trump praised Haley’s actions before he left the White House for Christmas.
“Let them vote against us. We’ll save a lot. We don’t care,” Trump said.
Trump campaigned in part on a pledge to reduce US commitments abroad, and Haley entered her post questioning the value of the US’ funding of the UN.
Earlier this year, Haley cheered cuts to the UN’s peacekeeping budget, and Sunday’s announcement on further reductions to the UN’s overall budget included a vow by the ambassador for the “America First” administration to seek further reductions for the UN budget.
“You can be sure we’ll continue to look at ways to increase the UN’s efficiency while protecting our interests,” Haley said Sunday.
FG to sell Tafawa Balewa Square, National Theatre others to finance 2018-2020 budget
Jersey Island gives conditions for return of $300m Abacha loot
US tax bill: Republicans agree sweeping changes
Governor Ambode presents the 2018 budget to the Lagos State House of Assembly
Slave trade aside, Libya starts voter registration ahead of 2018 elections
Ivanka Trump US President’s daughter urges India to boost women in workplace
Federal Government to raise N311b from assets sale
Russian jet makes ‘unsafe’ intercept of US Navy aircraft
US ready for North Korea talks without preconditions, says Tillerson
28-year old model dies after suffering bleeding in the brain while singing at karaoke
Antonio Guterres Trump says UN boss doing ‘very very spectacular job’ US President Donald Trump jettisoned his past criticism of the United Nations Friday, as he lavished praise on the organization’s Secretary General.
Trump retweets anti-Muslim videos
President bans fresh recruitment into MDAs in 2018
In Niger Second US team operated near site of Niger ambush – Pentagon “There are other teams that operate in Niger. There was one that had something to do with this operation,” Joint Staff Director Lieutenant General Kenneth McKenzie said.
2018 Budget Stakeholders advise FG to check militants to achieve revenue projection The Federal Government plans to spend about N8.6 trillion in 2018, a 15 per cent increase over the N7.44 trillion budget in 2017.