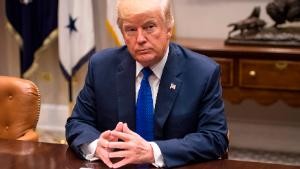 The videos, posted by Jayda Fransen, the deputy leader of Britain First, a far-right and ultra-nationalist political group, depict purported Muslims assaulting people and, in one video, smashing a statue of the Virgin Mary.
Trump, who has previously warned that immigration from Muslim-majority nations threatens European and US security, frequently retweets other messages whose political views he finds favorable. But he has seldom shared messages as offensive and explosive as he did on Wednesday, and the retweets were immediately met with outrage in the United Kingdom and resulted in a rare rebuke from the British government toward its American ally.
Fransen reacted jubilantly online, touting that the videos had been shared with Trump’s nearly 44 million followers. “GOD BLESS YOU TRUMP!” she wrote in all caps.
White House press secretary Sarah Sanders defended Trump’s retweets, telling reporters that he shared them to start a conversation about border security and immigration.
“I think his goal is to promote strong borders and strong national security,” Sanders told a small group of reporters after appearing on Fox News.
Sanders also downplayed questions about whether the videos were authentic, because “the threat is real.” 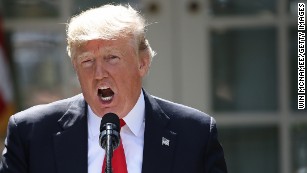 White House defends anti-Muslim Trump tweets, says it doesn’t matter if videos are real
“That is what the President is talking about, that is what the President is focused on, is dealing with those real threats, and those are real no matter how you look at it,” she said.
One of the videos purports to show a young “Muslim migrant” attacking a boy on crutches. The Dutch attorney general’s office, which handled the case, said the incident occurred in May and the suspect was born and raised in the Netherlands. A spokesperson would not comment on the suspect’s religion, saying it was against their policy to share such information.
Sanders said she didn’t know how Trump came across the videos, but conservative commentator Ann Coulter, who is one of the 45 accounts Trump follows, had retweeted Tuesday one of the clips shared by Fransen.
Fransen was found guilty of religiously aggravated harassment in November 2016 after abusing a Muslim woman wearing a hijab while she was with her four children. She was fined by the court and ordered to pay costs.
In a separate development, Fransen was also charged over using “threatening, abusive or insulting words or behavior” during a speech she made in Belfast in Northern Ireland. She is set to appear at Belfast Magistrates Court on December 14.

Trump’s retweets were leading several major British news websites Wednesday morning, and officials condemned him on Twitter. A spokesperson for UK Prime Minister Theresa May said Trump was “wrong” to share the videos, adding that “Britain First seeks to divide communities through their use of hateful narratives which peddle lies and stoke tensions.”
“British people overwhelmingly reject the prejudiced rhetoric of the far-right, which is the antithesis of the values that this country represents — decency, tolerance and respect,” added the spokesperson, who also said Trump’s upcoming 2018 state visit for now remains on.
A senior member of May’s Conservative government, Communities secretary Sajid Javid also tweeted about the issue, writing: “So POTUS has endorsed the views of a vile, hate-filled racist organisation that hates me and people like me. He is wrong and I refuse to let it go and say nothing.”
The Muslim Council of Britain slammed Trump in a statement, saying the retweets were “the clearest endorsement yet from the US President of the far-right and their vile anti-Muslim propaganda. The US-based Council on American-Islamic Relations similarly condemned Trump’s retweets, saying he is “clearly telling members of his base that they should hate Islam and Muslims.”
Jeremy Corbyn, the leader of the UK opposition Labour Party, called the retweets “abhorrent, dangerous and a threat to our society.” Labour lawmaker David Lammy told the President he was “not welcome in my country and my city.”
Brendan Cox, the husband of Jo Cox, the British MP who was murdered last year by a man who reportedly shouted “Britain First” as he attacked her, tweeted, “Trump has legitimized the far right in his own country, now he’s trying to do it in ours. Spreading hatred has consequences & the President should be ashamed of himself.”
Asked about Trump’s retweets on CNN’s “New Day,” former Director of National Intelligence James Clapper said he found them “bizarre and disturbing.”
“I think it causes friends and allies to question where is he coming from with this. So it has all kinds of ripple effects both in terms of perhaps inciting or encouraging anti-Muslim violence, and as well, causes, I think, our friends and allies to wonder about the judgment of the President of the United States,” he said.
One person who applauded Trump’s Twitter actions: former Ku Klux Klan Grand Wizard David Duke, who tweeted, “Thank God for Trump! That’s why we love him!” 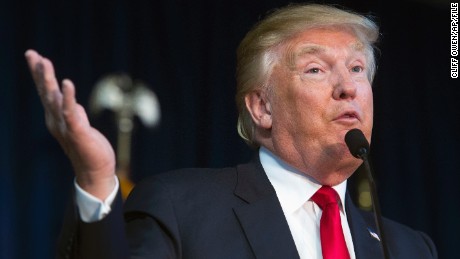 The things Donald Trump has said about Muslims 01:24

Trump has repeatedly used examples of terrorism and immigration in Europe to bolster his case for a travel ban in the United States against several Muslim-majority nations. The travel ban would not affect travel from the United Kingdom. On September 15, the President reacted on Twitter to a terrorist attack in London, calling the terrorists “sick and demented people,” ending the tweet by declaring, “Must be proactive!”
He also added to his tweet that he would like to see a stronger travel ban: “The travel ban into the United States should be far larger, tougher and more specific-but stupidly, that would not be politically correct!” 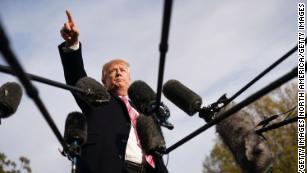 Cillizza: Donald Trump’s assault on truth circles back to birtherism
Several versions of Trump’s travel ban have been tied up in court battles. The Supreme Court is currently considering whether to allow all of the third version of the ban to go into effect pending appeal. Trump’s previous comments about Muslims have been cited in court rulings blocking previous versions of the ban, and it’s possible his retweets on Wednesday could be cited in the future.
As a candidate, Trump called for a “total and complete shutdown” of Muslims entering the US and often cited Muslim migration to Europe as his justification, tweeting in December 2015 that the UK was “trying hard to disguise their massive Muslim problem.”
The President has also been critical of German Chancellor Angela Merkel in the past for her handling of immigration into Germany.
“What’s happening in Germany, I always thought Merkel was like this great leader. What she’s done in Germany is insane. It is insane. They’re having all sorts of attacks,” Trump said in an October 2015 interview.
White House says Trump, Duterte ‘briefly’ discussed human rights but Philippine spokesman says they didn’t
Donald Trump arrives in S Korea with focus on Pyongyang
Trump plays round of golf with ‘wonderful people’ Shinzo Abe &amp; Hideki Matsuyama
US president jumps over China’s ‘Great Firewall’ with first tweet
Five myths about gun deaths in us
Ogun State Commissioner for Commerce and Industry, Bimbo Ashiru resigns
Trump’s Mar-a-Lago Thanksgiving
“Touched by an Angel” star dies at 86
2 Nigerian men jailed for £300,000 fraud in the U.K