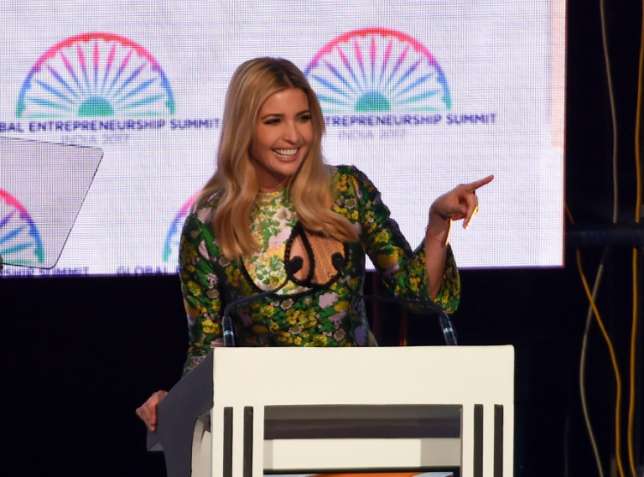 Ivanka Trump urged India on Tuesday to close its yawning gender gap in the job market, telling a business summit in her biggest foreign mission yet that this would bring huge economic benefits.

US President Donald Trump’s eldest daughter urged India to seize the untapped potential in women in a speech before Prime Minister Narendra Modi and business leaders in Hyderabad.

India is one of the world’s fastest growing major economies but also has one of the lowest rates of female employment, a trend that has worsened over the last decade.

The World Bank has warned that the country must reverse a trend of falling women’s participation in jobs if it is to achieve its ambition of double-digit growth.

“Just consider, if India closes the labour force gender gap by half, your economy could grow by over $150 billion dollars in the next three years,” Trump told the Global Entrepreneurship Summit.

“I encourage everyone here today to come together, to learn from each other, and to find new ways to lift the barriers in our societies so that women are free to innovate.”

Female participation in India’s workforce has declined since 2007, particularly in rural areas.

Women remain in education for longer, but even college-educated women are staying out of the workplace — just 34 percent of those with a degree are working, the World Bank reported in May.

It said India’s female labour force participation rate was “uniquely low” for all levels of education.

Trump, without directly referring to India, lamented inequitable laws and cultural pressures that in some countries prevent women from working or travelling freely.

The 36-year-old White House adviser is in India promoting women’s empowerment in business and underscoring the growing friendship between the United States and the South Asian powerhouse.

“We have provided for not less than one third of women representation in rural and urban local bodies, ensuring women’s participation in grassroot-level decision-making,” he added.

“More than 60 percent of workers in our agriculture and allied sectors are women.”

Trump arrived to much fanfare and a red carpet welcome on Tuesday in the city of some six million people, which is home to the Indian operations of Google, Facebook and Amazon.

Concrete highways were splashed with rainbow paint and giant billboards with the beaming Trump’s image were erected across the southern city.

Colourful murals and festive lights adorned the streets leading up to the sprawling venue where more than 1,500 delegates from 150 countries have gathered for the three-day event.

Police cleared hundreds of beggars off Hyderabad’s streets ahead of her visit and spruced up a 16th century mosque that she is likely to visit on Wednesday.

But not everyone has welcomed the fuss around the Trump scion ahead of the summit, which has been promoted as an opportunity to champion female business leaders and entrepreneurs.

“I want to know what criteria was used to select her as our leader. What special contribution has she made?” Sangeeta Agarawal, founder and CEO of a US-based startup, told AFP.

“It’s being called an Ivanka Trump’s event. She has totally overshadowed the cause. It’s become only about her. By hogging all the limelight she is putting deserving women last.”

But others saw Trump’s visit as a source of immense pride.

“She is a global figure and we are quite excited about the visit. I hope she gets to see the city landmarks and enjoy local food,” said 22-year-old Rubina Bhatt, who volunteered to help at the summit.

The visit has been clouded by US media reports questioning Trump’s clothing line and its supply chain as well as a snub by Rex Tillerson, the US secretary of state, who has reportedly refused to send senior staff with Trump to India.

Morning Teaser ‘My best friend’s wife is carrying my baby’ Nnamdi is in a very serious dilemma after he got his best friend’s wife pregnant and as the baby is due, he does not know if he should confess what he did.
Three students in Egypt stab a Nigerian man to death
Joe Praize – Everything is Blessed
Trump-Russia Indictments, guilty plea in probe: What we know Two former Donald Trump associates were indicted Monday and it was revealed another has pleaded guilty to lying to FBI investigators, in the first substantial legal action stemming from the probe into Russia’s US election interference.
NOUN gets first female Deputy Vice-Chancellor
Why I withdrew Governor Obiano’s security personnel – Police IG Speaks.