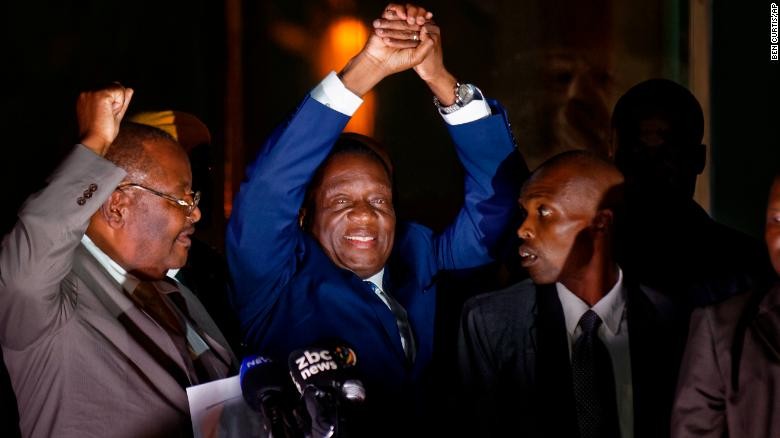 Harare, Zimbabwe (CNN)Zimbabwe’s former vice president has returned to the country to serve as interim President, vowing to lead the nation into a “new and unfolding democracy” following Robert Mugabe’s historic resignation.

Emmerson Mnangagwa, who is scheduled to be sworn in on Friday, arrived at the ruling ZANU-PF party headquarters in the evening to the cheers of thousands of supporters, eager to hear from “The Crocodile,” as he is known. 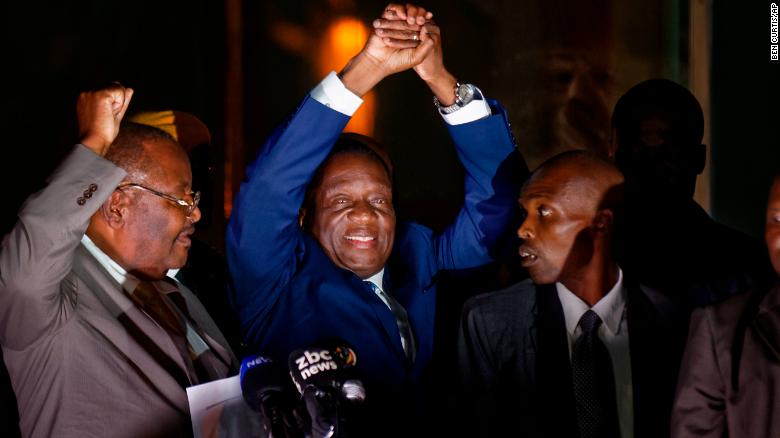 Zimbabwe’s incoming leader Emmerson Mnangagwa greets supporters Wednesday in Harare.
Mnangagwa’s return comes after a night of euphoric celebration. For the first day in nearly four decades, Zimbabweans experienced life free from Mugabe’s iron grip.
“Today we are witnessing the beginning of a new and unfolding democracy,” he told his supporters. “The voice of the people is the voice of God.” 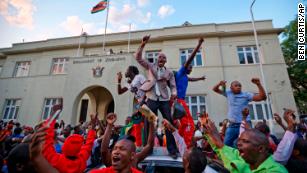 ‘A moment of brilliance’: What it was like in Harare when Mugabe resigned
Mugabe, 93, fired Mnangagwa as his deputy more than two weeks ago, triggering a political firestorm that culminated in his own humiliating defeat on Tuesday. Mnangagwa fled the country after his dismissal.
Mnangagwa’s rise comes just a week after the military took control in the capital, Harare, in what the defense forces insisted was not a coup.
But the incoming leader confirmed in his remarks that he was in “constant contact” with the military chiefs over the past week. Sources had told CNN that Mnangagwa had been instrumental in plans to dethrone the president.
In his speech, Mnangagwa avoided references to elections slated for next year. He will need to run and win the popular vote to remain in power for any meaningful amount of time and to have a clear mandate from the people.
But his speech nonetheless resembled the opening of an election campaign, in which he promised to bring prosperity and stability to the impoverished country.
“I pledge myself to be your servant,” he said.
“We want to grow the economy. We want peace in our country. We want jobs, jobs, jobs.”

For many, the joyous end of Mugabe’s reign is tempered with apprehension — Mnanagagwa served as Mugabe’s right-hand man for his entire career, and to many Zimbabweans, he is more feared than the leader he replaces.
The main opposition MDC-T has shown no resistance to Mnangagwa serving as transitional leader. It will be looking instead to make inroads in next year’s elections. 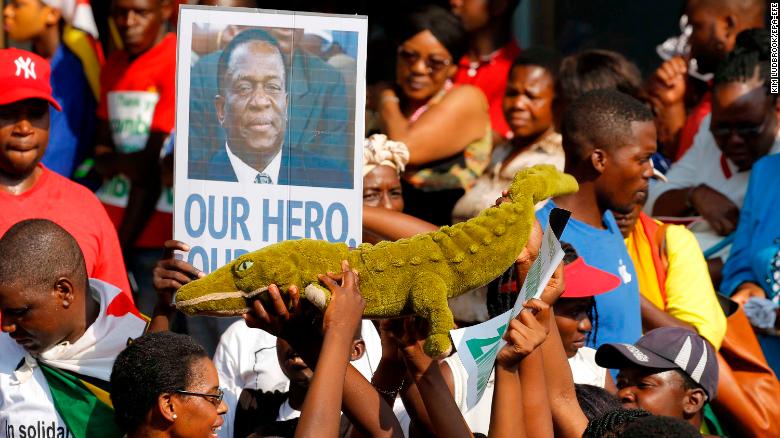 Supporters of Emmerson Mnangagwa hold up a toy to celebrate the man nicknamed ‘The Crocodile’ as they waited at an airport for his arrival Wednesday.
“We are very excited that we have gotten rid of Robert Mugabe, but we have gotten rid of one man, we have not gotten rid of the system that was oppressive for 37 years,” MDC-T Secretary General Douglas Mwonzora told CNN.
“Therefore we have to work towards conditions for free and fair elections. The Zimbabwean people still have to choose a president by themselves.” 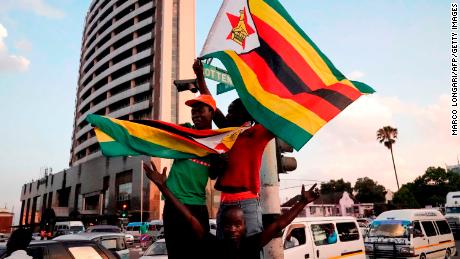 Celebrations in Zimbabwe as Mugabe resigns 01:11
Mnangagwa had previously said that he wouldn’t return to Zimbabwe until his safety was guaranteed.
He was widely tipped to take over for Mugabe in the event of the president’s resignation or death, but his dismissal confirmed suspicions that Mugabe was clearing the way for his wife, Grace Mugabe, to succeed him.
Generals in the military staged an apparent coup in Harare last week, determined to keep Grace Mugabe from seizing power, and placed Robert Mugabe under house arrest as pressure mounted on him to stand down.
Donald Trump lashes out at LaVar Ball for being ungrateful for his son’s release for shoplifting in China
#Budget2018: ‘Nigerians will be better, happier in 2018’
Mugabe resigns: Zimbabwe celebrates end of an era
Nigerians on twitter slam Okorocha for unveiling statue of Liberian President, Ellen J. Sirleaf in Imo State today
US President stepped up praise for Xi ahead of China visit
Woman in court for alleged stealing fraud
Zimbabwe politics: Mugabe sacks ‘disloyal’ Mnangagwa
Photos: Lagos Police Commissioner leads task force to visit Apapa-Kirikiri traffic gridlock
‘Mugabe must go’ See the mammoth crowd that came out to protest against Zimbabwe’s Robert Mugabe today (photos/video)
Obasanjo is boss of bosses, Jonathan Tells Atiku to reconcile with Obasanjo or forget bout 2019 presidency
‘My government will improve aviation infrastructure’ – President Buhari
Here’s the full text of President Buhari’s speech at the APC National Executive Congress today
In India Journalist shot dead in northern India: police A journalist was shot dead by three gunmen in northern India on Saturday, police said, the latest attack on media in one of Asia’s deadliest countries for reporters.
Ogun State Commissioner for Commerce and Industry, Bimbo Ashiru resigns
Donald Trump arrives in S Korea with focus on Pyongyang
Alex Ekwueme Senate urges FG to immortalise former Vice-President
In Vietnam Death toll from typhoon rises to 61 The death toll from typhoon downpours and floods wreaking havoc along Vietnam’s south-central coast has risen to 61, an official said Tuesday, as the country opens its doors to world leaders for this week’s APEC summit.
Why I withdrew Governor Obiano’s security personnel – Police IG Speaks.
President Paul Biya of Cameroon marks 35 years in power