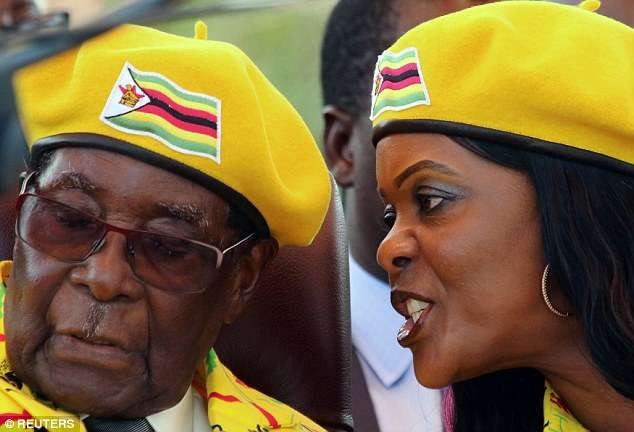 The woman at the heart of the Zimbabwe coup is known as Gucci Grace popularly known as Grace Mugabe.

Just like the wives of many dictators, Grace Mugabe had grown to be a political force who had the ambition to rule Zimbabwe after the demise of her husband Robert Mugabe.

The coup was a result of Mugabe firing his vice-president and replacing him with his wife. This unpopular move led to the military to take over the country.

Grace Mugabe is called Gucci Grace because of her extravagant and lavish lifestyle. In a country with serious economic problems, Grace Mugabe was known for spending large sums of money.

In 2012, it was claimed that she spent £120,000 in many expensive stories in Europe. When she was confronted with spending so much, she denied it. “The only thing I’ve bought in Harrods is almond nuts because I eat lots of almond nuts. I want to eat healthily… I go out and they say she’s bought clothes with a million pounds” she said in an interview in 2013.

Grace Mugabe also built a huge palace for herself in Zimbabwe. When there was much public outcry over this, she claimed she got the money to build the palace from her salary as a presidential secretary years ago.

Apart from spending lavishly Gucci Grace is known for her infamous temper. The former first lady of Zimbabwe is wanted in South Africa for allegedly assaulting a 20-year-old model for hanging out with her sons.

According to reports, Grace lost her temper, grabbed an extension cord and beat the model.

“I might have a small fist but when it comes to fighting I will put stones inside to enlarge it. Do not doubt my capabilities” she reportedly said a few years ago.

Grace Mugabe married Robert Mugabe in 1992. Prior to their marriage, she was Mugabe’s secretary. The two were both married when they started seeing during office hours.

play Zimbabwe President’s wife Grace Mugabe, potentialy a successor, delivers a speech during a ruling party event on November 4, 2017 in Bulawayo, where she was heckled

It was said that Mugabe’s first wife gave her his blessings because she was terminally ill. As for Grace’s husband, he didn’t put up much of a fight when his wife left him for the dictator.

Initial reports suggested that  Gucci Grace was in Namibia, Dubai or Malaysia but it has been confirmed that she is still in the country.

Tyrese threatened The Rock’s daughters on social media
Nigeria Vs Argentina FIFA approve November 14 friendly
Tiwa Savage Singer says God saw her through the trying times of her marriageTiwa Savage Singer says God saw her through the trying times of her marriage
LIL PUMP – ‘GUCCI GANG’
President Buhari approves the immediate treatment of Alex Ekwueme outside the country
Hollywood actor Robert Guillaume dies at 89
Here’s the full text of President Buhari’s speech at the APC National Executive Congress today
Check out newly released pre-wedding photos of Oritsefemi and his wife, Nabila
Rex Tillerson US Secretary of State visits Pakistan as US warns over Taliban havens Pakistan has repeatedly denied the charge, insisting it maintains contacts only with the militants as it seeks to bring them to the table for peace talks.
Lionel Messi Barcelona star and his wife hang out with Fabregas in London Messi and Fabregas hung out together with their partners to have lunch in London.
In India Journalist shot dead in northern India: police A journalist was shot dead by three gunmen in northern India on Saturday, police said, the latest attack on media in one of Asia’s deadliest countries for reporters.
Legendary German actress, Karin Dor dies at 79
EU gives country ‘yellow card’ over illegal fishing The European Union said Monday it has given a “yellow card” to Vietnam, warning the Pacific country it could ban seafood exports unless Hanoi did more to tackle illegal fishing.
Harry Kane to miss Old Trafford Clash
President Paul Biya of Cameroon marks 35 years in power
18-year-old pregnant mother-of-one and her husband reveal why they went into robbery
ARAMIDE: Why I admire Alicia Keys
2face Idibia, Annie and their kids jet out to Dubai for a birthday vacation (photo)
Quadri commands respect among top players – Adomeit

Lol…Who did this President Trump?