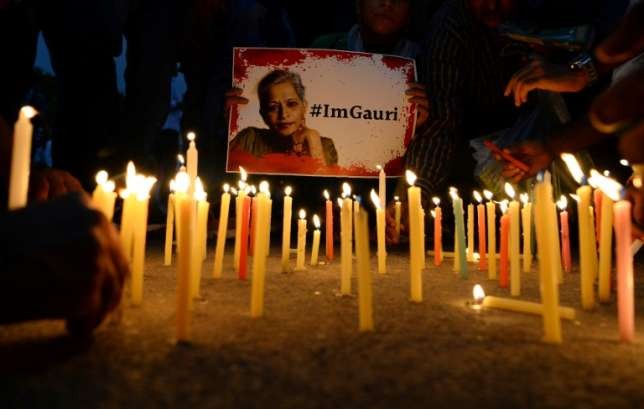 A journalist was shot dead by three gunmen in northern India on Saturday, police said, the latest attack on media in one of Asia’s deadliest countries for reporters.

Rajesh Mishra, a 40-year-old reporter at the Hindi-language daily Dainik Jagran — one of India’s largest newspapers — was shot in the head by three gunmen on a motorcycle in Uttar Pradesh state, additional director general of police Anand Kumar said.

“Three thugs fired the shots. Two of the three have been identified,” Kumar told reporters.

“We are confident that we will arrest all three by tonight. We have their names and the investigation is on,” he said, adding police were yet to ascertain the motive behind the killing.

Mishra was a member of the Rashtriya Swayamsevak Sangh (RSS), an influential right-wing Hindu organisation seen as the ideological fountainhead of the national ruling Bharatiya Janata Party (BJP).

Saturday’s killing comes a month after a reporter covering political unrest in India’s northeast was beaten to death during violent clashes.

In September, gunmen in the IT hub of Bangalore shot dead prominent journalist Gauri Lankesh, a newspaper editor and outspoken critic of the BJP, as she entered her home.

No arrests have been made so far in that case.

The high-profile killing triggered an outpouring of anger and protests across the country, with the Editors Guild of India saying Lankesh’s death was “an ominous portent for dissent in democracy and a brutal assault on the freedom of the press”.

India has a historically poor record on journalists’ safety, although most deaths occur in remote rural areas away from the major urban centres.

Forty-one journalists have been killed in India since the early 1990s, according to the latest figures from the Committee to Protect Journalists.

Journalists in the world’s largest democracy often face harassment and intimidation by police, politicians, bureaucrats and criminal gangs, while scores work in hostile conditions in conflict-ridden pockets of the country.

Share
Facebook
Twitter
WhatsApp
Pinterest
Linkedin
ReddIt
Email
Print
Tumblr
Telegram
Mix
VK
Digg
LINE
Viber
Naver
Previous articleDonald Trump US president says end of IS caliphate ‘in sight’ after Raqa’s fall US President Donald Trump on Saturday said the end of the Islamic State group’s “caliphate is in sight” following the fall of its former bastion Raqa, and a transition can soon begin to set conditions for lasting peace in Syria.
Next articleIn Egypt Ceremony marks 75 years since El Alamein battle as country mourns Delegates from former foes Saturday marked 75 years since the pivotal WWII battle of El Alamein that saw the Allies turn the tables in North Africa, as host country Egypt mourned the killing of dozens of its policemen.