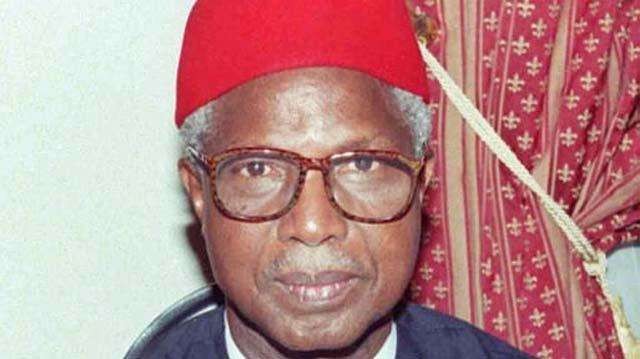 The Deputy Leader of Senate called for the immortalisation of the former vice president in view of his loyalty to former President Shehu Shagari.

The Senate on Tuesday called on the Federal Government to immortalise the late former Vice President, Dr Alex Ekwueme, by naming the Federal Polytechnic, Oko, or other key federal institution or asset after him.

This was sequel to a motion on: The Passing on of Former Vice President, Dr Alex Ifeanyichukwu Ekwueme (1932-2017), sponsored by Deputy President of the Senate, Mr Ike Ekweremadu, at plenary.

He noted that the late elder statesman was an intellectual giant and “consummate professional’’, who pioneered architecture in modern Nigeria and paid his dues to the social, economic, and political development of Nigeria.

“The late Dr Alex Ekwueme was a bridge builder, patriot and pan-Nigerian, who played a major role in the post-war reconciliation process in Nigeria.

“As Vice President of Nigeria, Ekwueme led exemplary life of unassailable probity and unimpeachable integrity, such that even the military tribunal that tried him during his 20-month detention after the 1984 coup discharged and acquitted him.

“The tribunal also empathically stated that Ekwueme left office poorer than he was when he entered it, and to ask more from him was to set a standard, which even angels could not meet,” Ekweremadu said.

He described Ekwueme as a legend, fearless soldier of democracy, who, among other efforts, mobilised 34 eminent Nigerians on the platform of G34 to demand an end to military rule and pushed for enthronement of democracy.

Contributing, Sen. Enyinnaya Abaribe (PDP -Abia) said the fondest memory of late Ekwueme was that he remained the only former vice president that left office and still became poor.

Also, Sen. Bala Na’Allah (APC- Kebbi) said though the deceased hailed from the South East, he was “a single Nigerian” who contributed immensely to Nigeria’s democracy and future of the country.

Na’Allah, who is Deputy Leader of Senate, called for the immortalisation of the former vice president in view of his loyalty to former President Shehu Shagari, with a national institution in Sokoto State.

In his remarks, President of the Senate, Dr Bukola Saraki, said the death of Ekwueme was a great loss to Nigeria.

“He was a great patriot, detribalised and simple person that put Nigeria first.

“Ekwueme will be missed by all,” Saraki said.

On a voice vote, the motion was unanimously adopted.

Alex Ekwueme Former VP left footprints on sands of time – Ambode
President Buhari approves the immediate treatment of Alex Ekwueme outside the country
Photos: Vice President Yemi Osinbajo attends wedding of the DSS official attached to him
Antonio Guterres Trump says UN boss doing ‘very very spectacular job’ US President Donald Trump jettisoned his past criticism of the United Nations Friday, as he lavished praise on the organization’s Secretary General.
Obasanjo is boss of bosses, Jonathan Tells Atiku to reconcile with Obasanjo or forget bout 2019 presidency
Pence US VP says 1983 bombing was opening salvo in ‘war on terror’ US Vice President Mike Pence described the 1983 bombing of a Marine Corps barracks in Beirut as the opening shots of the “war of terror” Monday, as he issued fresh warnings to Iran and Hezbollah.

Osinbajo to inaugurate projects in Kwara