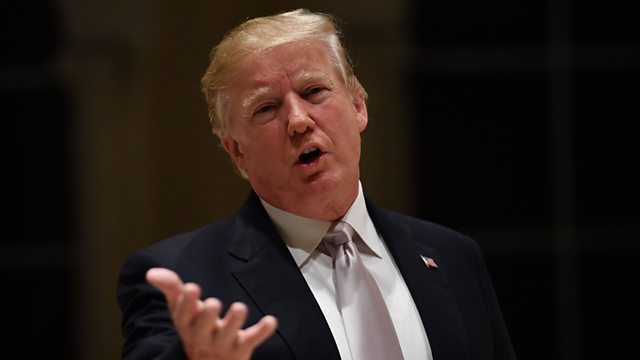 Donald Trump denies being a racist after ‘shithole’ row

President Trump has denied that he is racist, after a row broke out over his alleged use of the word “shithole” to describe African nations.

He has now told reporters: “I am not a racist. I’m the least racist person you will ever interview”.

It is the first time the president has responded directly to the racism accusations.

He made the denial to White House press pool reporters at the Trump International Golf Club in West Palm Beach on Sunday night.

What did the president allegedly say?

The row broke out after lawmakers from both parties visited the president on Thursday to work on a proposal for a bipartisan immigration deal.

In recent weeks the Trump administration has been withdrawing Temporary Protected Status (TPS) from a number of nationalities currently living in the country.

Reports later emerged in US media that Trump had asked during the meeting: “Why are we having all these people from shithole countries come here?”

Mr Trump was said to have told them that instead of granting temporary residency to citizens of countries hit by natural disasters, war or epidemics, the US should instead be taking in migrants from countries like Norway.

Accounts suggest that when Mr Trump was told that the largest groups of immigrants with the status were from El Salvador, Honduras and Haiti, the president responded: “Haitians? Do we need more Haitians?”

Who backed up the claims?

The president tweeted on Friday morning that the language he used in the meeting was “tough” but disputed the wording of the reports.

He also posted another tweet denying he had insulted Haitians, accusing Democrats of making it up.

But Senator Dick Durbin stood by claims, and said that Mr Trump had used “hate-filled, vile and racist” language during the meeting.

Several senior Republican lawmakers at the meeting, including Homeland Security Secretary Kirstjen Nielsen, have said they do not recall Mr Trump making the remark.

But another Republican senator who was there, Lindsey Graham, did not deny the comments were made.

“Following comments by the president, I said my piece directly to him yesterday. The president and all those attending the meeting know what I said and how I feel,” he said.

Asked on Sunday on whether he thought the comments had made it harder to achieve any immigration deal, Mr Trump responded: “Have you seen what various senators said about my comments? They weren’t made.”

The African Union on Friday demanded that the US president apologise after the alleged comments, expressing their “shock, dismay and outrage” at the “clearly racist” remarks.

The UN human rights spokesman, Rupert Colville, told a Geneva news briefing: “There is no other word one can use but racist. You cannot dismiss entire countries and continents as ‘shitholes’.”

The National Association for the Advancement of Colored People (NAACP) accused the president of falling “deeper and deeper into the rabbit hole of racism and xenophobia”.

Several Democratic representatives have said they intend to skip the president’s State of the Union address later this month over the comments, accusing the president of racism.