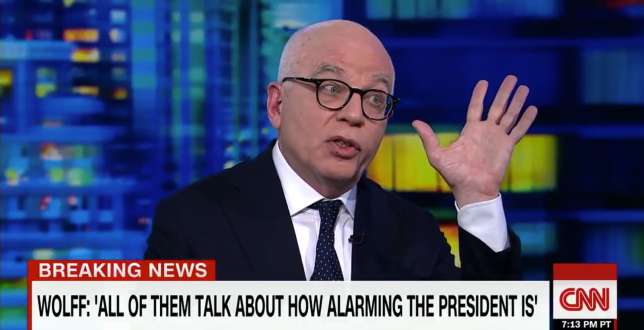 Despite numerous denials from the Trump administration that Wolff spoke with Trump, Wolff said he talked with him and was given access to senior staff members.

Michael Wolff, author of “Fire and Fury: Inside the Trump White House,” defended his book’s account of the purported chaos inside President Donald Trump’s administration during an CNN interview Monday.

The book, which paints a frantic scene of the White House through its embarrassing quotes from senior staff members, was released Friday. Over the past week, it has drawn the Trump administration’s ire and outright denials of some of its stunning details.

“Everybody was told to speak to me,” Wolff said of his largely unfettered access to members of Trump’s staff.

Trump, who has called Wolff’s book “phony” and gone on a campaign to discredit it, has said he “authorized Zero access to White House” and had “actually turned him down many times.” Trump’s personal attorney threatened to take “imminent” legal action over the book, although it appears the threat may have backfired.

“Because they’re liars!” Wolff said. “What are you talking about? This is Donald Trump. This is what he does.”

Although Wolff said he stood by “absolutely everything” in his book, he acknowledged in an author’s note that he was not sure if all of the claims were true, given that some of the subjects he interviewed gave conflicting accounts.

The book’s release has been met with some skepticism, with some prominent journalists calling it “light in fact-checking.” But that hasn’t stopped readers from heading out to bookstores in droves, and the book’s release drew huge crowds in certain pockets of the country.

Source: White House wanted to publicly shame Tillerson
The 5 best/worst Trump Thanksgiving tweets
Trump-Russia: Michael Flynn admits lying to FBI
US tax bill: Republicans agree sweeping changes
Trump raises new questions about Mueller
President Trump signs new order to send American astronauts to the moon
‘House of Cards’ writers racing against the clock to rewrite show
The White House’s famous magnolia tree to be cut back
Trump’s Mar-a-Lago Thanksgiving
Trump US lawmakers deny Democrat’s bid to impeach President
Lady Gaga puts on very sexy display as she arrives for World Series game in LA (Photos)
Trump slams ex-chief strategist Steve Bannon after criticism, saying he ‘lost his mind’
In US Case dismissed: Trump judicial nominee calls it quits
Is Trump the WTO’s biggest threat?
‘Goodluck Jonathan’s administration won gold medal in corruption’ Bola Tinubu
Morning Teaser ‘My best friend’s wife is carrying my baby’ Nnamdi is in a very serious dilemma after he got his best friend’s wife pregnant and as the baby is due, he does not know if he should confess what he did.
This story on Trump’s Russia paranoia is terrifying