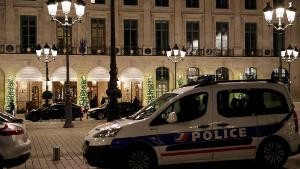 A bag found at Paris’ famed Ritz Hotel is “likely to contain” the 4 million euros ($4.8 million) worth of jewels that were stolen from the hotel, a spokesman for the city’s public prosecutor said Thursday.
The news came a day after a daring smash-and-grab robbery was reported at the five-star landmark. Police said a gang of axe-wielding thieves stormed the hotel, busted into display cases and snatched the precious jewelry. 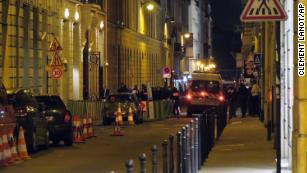 Police: Thieves steal millions in jewels from Ritz
Terrified guests were forced to take cover as shots rang out, witnesses said.
Three suspects were arrested at the scene, but two others escaped with at least some of the gems, police said.
The car used to flee the scene has been found charred, the prosecutor’s spokesman said. He said authorities were able to match the burned wreckage by its license.
But the more valuable — and surprising — discovery was the bag. Authorities are checking its contents to see whether it indeed contains all the missing jewels.
Authorities did not say where in the hotel the bag was found, nor did they say how it may have been separated from the robbers.

Niki Lazar, a 21-year-old woman from Chicago, told CNN that she was having a drink with her parents in the Ritz’s Hemingway Bar when she saw a man wearing a ski mask run into the hotel.
“(He) ran right from the back door of the bar to the front, right past my father. He had an ax in his hand,” she said. “Immediately the bartender closed and locked the door and (corralled) everyone to the back kitchen area of the bar.”
Lazar said “at least 10 rounds of gunfire” rang out she took cover behind the bar, where she and other patrons remained hidden for several minutes. She said she later saw one of the bartenders being tended to by a paramedic.
Hotel security managed to trigger an automatic locking system during the heist, locking three of the robbers inside, Jean-François Legaret, the mayor of Paris’ 1st district, told CNN on Thursday.
“I would say that this was a very violent, armed attack by a large, well-organized and professional gang,” Legaret said. “They are people who are already known by the police services.”

The Ritz Hotel is in Place Vendôme, not far from popular landmarks such as the Louvre and the Jardin des Tuileries.
The hotel has an on-site shopping area with five high-end boutiques and 95 display cases for luxury goods.
The robbery was the second major jewel heist in a major European city in a week.
Last week thieves made a daytime heist of valuable jewels from the Qatari royal collection at an exhibition in Venice, Italy. Local officials said the jewels were of “indisputably elevated value.”
That robbery occurred at the Doge’s Palace, a popular tourist spot in Venice, where the selection of Indian jewelry was on display to the public. One suspect may have acted as a lookout while the other grabbed the jewels from a display case, police said.
The stolen items included a pair of earrings and a brooch made of diamonds, gold and platinum.
And in October 2016, Kim Kardashian West was robbed at gunpoint inside her room at a luxury private mansion in Paris by a gang of men disguised as police officers. They made off with an estimated $10 million in cash and jewelry.
4 boys gang rape a JSS2 female student in Ghana and they film it and share online
Burna Boy interrogated and detained by police in connection with Mr 2kay’s robbery attack at Eko hotel (photos)
Chicago man “froze to death” at a train station while waiting for a train home
Photos: Emir of Kano’s first son, Prince Aminu Sanusi, joins the Nigeria Police Force
Nigerian boy, 4, found dead after being kidnapped by his cousin for N5 million ransom
Stray cat a suspect in attempted murder In Japan
Photos: Pastor Adeboye and wife attend annual Thanksgiving service with Governor Ambode at the state house
Photos/Video: Mother of two sentenced to 6 months in prison for insulting Prophet Muhammad
Umahi Ebonyi Governor’s aide allegedly arrested for raping Facebook friend
Former Indomitable Lions of Cameroon player, Massing Benjamin found dead
Photos: Police parade 30 deadly kidnappers, armed robbers terrorizing Okene-Lokoja-Kabba road
Maheeda goes topless in racy Instagram photos
Donald Trump President says US could ‘conceivably’ return to Paris climate deal
Boy 19, stabs his stepfather to death and posts his final moments of life on Snapchat (Photos)
Woman in court for alleged stealing fraud
Tecno Phone brand storms Dubai again to launch Phantom 8 The launch that was held at the prestigious Armani Hotel, Burj Khalifa Dubai was not only to announce the unveiling of the Phantom 6 and 6 Plus but also to celebrate the brand’s tenth anniversary.
In Bayelsa Police draft 16 gunboats, 6, 000 policemen to creeks
SARS Police brutality, corruption in Nigerian popular culture