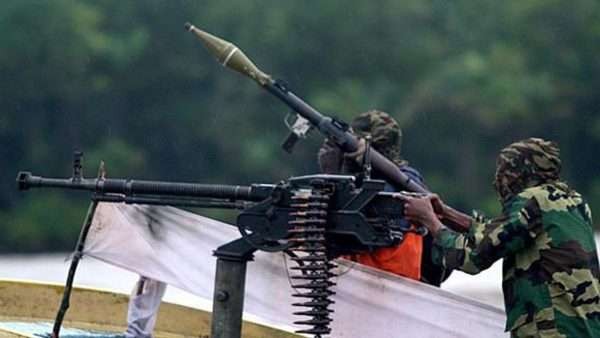 Amba said the 6,000 personnel had been deployed after undergoing marine training, while some are still being trained.

The Police in Bayelsa had deployed 16 patrol gunboats and 6, 000 policemen to tackle sea piracy and criminality in Bayelsa waterways to ensure safety of the water channels.

The Bayelsa Commissioner of Police, Mr Asuquo Amba, revealed this in Yenagoa on Saturday during a visit by members of the state chapter of the Civil Liberties Organisation (CLO).

News Agency of Nigeria (NAN) reports that the CLO team was led by its Chairman, Chief Nengi James.

Amba said the 6,000 personnel had been deployed after undergoing marine training, while some are still being trained.

The commissioner said intelligence report gathered by the police showed that the Delta and Rivers waterways had recorded relative calm due to synergy of the various state security agencies.

He, however, admitted that there were still some challenges with sea piracy in the state, pledging that the police would soon deal with sea pirates terrorising the state’s waterways.

Amba said 14 of the 16 gunboats being deployed were refurbished by the Bayelsa Government, while two were procured by the Police Zonal Command.

“Gov. Seriake Dickson has directed that 14 gun boats be repaired for the operation and two donated by the Police high command.

Speaking on prison congestion and recent cell break at the State Anti-Robbery Squad (SARS) office, Amba blamed the deplorable state of police detention facilities on the slow judicial processes for the development.

Amba said proposal for construction of a new and secured SARS’ cell and the amendment to improve the judicial process had been submitted to the relevant authorities.

“Most police cells are not in good conditions in the state. Also, the slow process of the Bayelsa judiciary is not helping matters.

“Out of all the states of the South South, Bayelsa court process is the slowest. All cases depend on Director of Public Prosecution’s clearance and when the case is cleared, it does not move forward.

” I have met with the Chief Judge of the state on the matter. I have also met with the state governor on the issue. When a police custody is congested, the inmates become agitated.” Amba said.

In his presentation, the state chairman, CLO, commended the Bayelsa Police Command for the recent successes recorded in the state.

James noted that though some personnel of the command were doing well, others had continually engaged in alleged extortion of members of the public.

He also alleged that some policemen are still demanding bribes before granting bails to suspects in the state.

At least 20 people shot as gunman opens fires during church service n Texas
Man commits suicide in Delta after girlfriend dumped him
In Yola Police arrest 200 cows for invasion of farm He also commended the herdsmen for accepting responsibility for the destruction by their cattle and their commitment to pay for the damages.
Monkeypox Virus now in 11 states The ministry of health’s spokesman, Mrs Boade Akinola made this known in a statement issued on Friday in Abuja.
18-year-old pregnant mother-of-one and her husband reveal why they went into robbery
Punk group attack ‘police state’ on Trump anniversary
5 kid-robbers arrested by OPC members while burgling shop A gang of kid-robbers who invaded a shop late in the night in Ogun State were saved from lynching by men of the OPC after they were caught.
Self Defence ‘I killed my uncle when he tried to rape me’ – Murder suspect The police in Enugu State have arrested a young girl who killed her uncle when he attempted to rape her in his house.
‘It’s better to be single than being in a relationship where you still feel very much alone’ – Omowunmi Akinnifesi advices Ladies
Photos: Lagos Police Commissioner leads task force to visit Apapa-Kirikiri traffic gridlock
Nigerian Basketballer dies in the USA
Mother sells daughter for N280,000 to pay debt
Pinki Debbie seeks world record for dance
Wike, Amaechi’s convoy clash in Port Harcourt [See pictures]
India rounds up beggars ahead of Ivanka Trump’s visit
Nine dead, many injured in accidents
Stray cat a suspect in attempted murder In Japan
Delta state confirms 1 case of Monkeypox
Union urges IGP to probe shooting of students in Ibadan