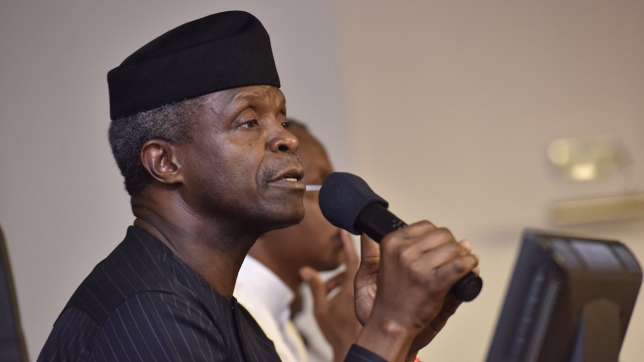 Osinbajo Those politicising recent killings must be stopped – Vice President

Osinbajo said those engaged in such are compounding the issues at hand, describing it as ‘pouring petrol into a burning fire.’

Vice-President Yemi Osinbajo has berated those he said are playing politics with the killings in different part of the country.

He said those engaged in such are compounding the issues at hand, describing it as ‘pouring petrol into a burning fire.’

Osinbajo also urged those affected by the killings not to retaliate.

He stated this on Sunday, January 7, 2018, at the  inter-denominational church service for the 2018 armed forces remembrance day celebration held  at the National Christian Center, Abuja.

He said, “The first obligation is to religiously defend the unity and territorial integrity of Nigeria by words and action.

“Rebuking firmly, and sometimes by recourse to law, those who by their word and action threaten to break the bond of nationhood paid for so dearly by the blood and sweat of our military.

“Second is to defend faithfully the freedoms and rights that form the fundament of our society in nationhood. We have seen in the past few years how these rights have been challenged by the mindless extremism of the Boko Haram in the north-east and how again our fallen military, the police and even the civilian populace have risen jointly to route these criminals combatants and restore peace in most communities in that zone.

“We have also seen even recently the killings that have resulted in attacks of herdsmen on farmers and communities and also where communities have attached herdsmen.

“The state of violence and loss of lives in Rivers State, the Badoo killings in Lagos and Ogun, the president has ordered the police and armed forces to deal decisively with these killings to ensure that the perpetrators are found and punished.

He has also through various strategic meetings task security agencies to work to find lasting solutions to these issues. But we recognised that as dangerous and deadly as heartless as these killings are, it is also the danger of allowing politics to play a part and to sometimes as they say pour petrol into an already burning fire.

“Our obligation is to stop them from playing dangerous politics that could threaten our unity and stability, just as we continue to enforce the peace in the troubled area.”

There have been outrage in the country over the violent killings that took place in some states in the wake of a new year.

Over 60 persons were reportedly killed by herdsmen in Benue State while 17 worshippers were also massacred at a church in Omoku, Rivers State, after a crossover service on New Year day.

The fleeing mastermind of the Rivers killings, Mr. Igwedibia Johnson, aka ‘General’ Don Waney, 34, and some of his gang members were killed in Enugu on Saturday, January 6, 2018, by soldiers and operatives of the Department of State Services (DSS).

Governor Fayose storms drinking joint in Ado-Ekiti to celebrate the yuletide with young men and women (video)
Boxing’s Best of 2017 features the biggest fights and biggest names that have stood out
In Benue Anti-grazing law must be modified for killings to stop – Cattle Breeders
“We attacked Benue communities because the residents attacked and stole our cows”-Miyetti Allah cattle breeders say
Fayose I like Osinbajo but his recent stand on NNPC and fuel subsidy is strange – Governor
Photos; Aisha Buhari, VP Yemi Osinbajo, his wife Dolapo, state governors, Ministers, others throw President Buhari a surprise get together
Nigerian Army captures 220 Boko Haram Insurgents In North-East
“You are better with your hair covered” – Man advises Kano Governor’s daughter Fatima Ganduje
First photos from the traditional wedding of Ondo state governor, Rotimi Akeredolu’s son, Babajide
’20 things you shouldn’t do in 2018′ – By Debola Williams
How to lead Nigerians out of poverty, by Tinubu
President Buhari congratulates Asisat Oshoala on wining the Women’s African Football Player of the Year
“Pray for us that are suffering in Sambisa forest” Soldier pleads with Nigerians
Antonio Guterres Trump says UN boss doing ‘very very spectacular job’ US President Donald Trump jettisoned his past criticism of the United Nations Friday, as he lavished praise on the organization’s Secretary General.
Photos from actress, Oma Nnadi’s traditional wedding
7 New Year’s resolution we never keep
Photos: Former Head of State, Abdulsalam Abubakar pays courtesy visit to President Buhari
6,672 Nigerians voluntarily returned from Libya In 2017 – NEMA
Exclusive Photos: Dbanj becomes a chief in Imo state