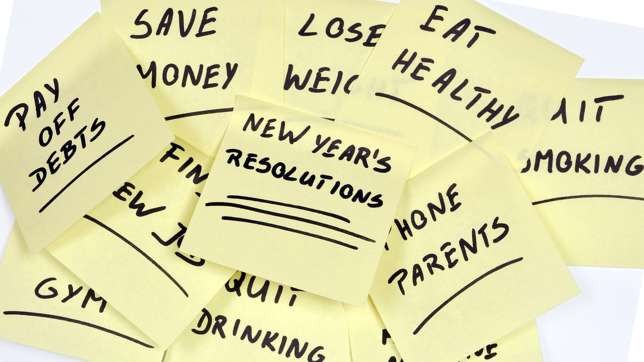 We promise ourselves that we won’t break these New Year resolutions but we fail early on.

Th New Year is a few hours away. 2018 is just around the corner and in usual tradition, young Nigerians are making New Year’s resolutions.

Making a New Year resolution is what we do at the beginning of a New Year. We make these resolutions and somewhere along the line, we lose it.

For many people, it is a yearly tradition and the resolutions revolve around the same things.

Below is a list of New Year resolutions that we know we are not going to keep in 2018.

We always tell ourselves that we are going to save more money in the New Year. Does this happen? No. In 2018 many of us will spend till we get to the last N1,000 in our bank accounts. Then when its December we swear not make the same mistake the following year.

play After New Year, many people struggle with fitness

play Many alcohol takers by June 2018

A lot of people make resolutions to reduce their alcohol intake which is a good thing. Only a few see it through. Before you know it, these peeps are back with a bottle of booze in their hands.

Smoking nicotine is bad. Making a New Year resolution to smoke less or quit smoking is a good thing. Let’s hope in 2018 these people find the mental strength and resolve to actually do it.

Everyone wants that killer body or summer body as they say. Some swear to themselves that they would stay off junk food and eat only healthy meals. Well…your guess is as good as ours.

6) Not be addicted to social media

play Learn how to get rid of your social media addiction

Social media is a drug and towards the end of the year, most people tend to be sick about how much control it has over them. As part of their New Year’s resolution, they promise to cut the amount of time they spend on Twitter, Instagram and SnapChat. We know that’s a resolution that never lasts long.

We all want to read more books and within the first few months we do read a few books but as the months roll by we tend to forget about this New Year resolution.

FG to sell Tafawa Balewa Square, National Theatre others to finance 2018-2020 budget
‘Atleast I f**ked for iPhone 6 not indomie – Young Nigerian girl brags on Facebook
Davido ‘FIA’ breaks from ‘Pon Pon’, but it complicates OBO’s winning formula
Rita Ora dragged on social media after posting ‘almost intimate’ photo with Conor McGregor
We really love each other but our parents are being difficult
‘When I got into the industry and found fame, I became irresponsible’ – Actress, Toyin Abraham
Liberia election: Court gives go ahead for run-off poll
Ha, whose mother/sister or aunty is angrily flaunting her breasts on social media?
Study: 59% of People Haven’t Checked If the Equifax Breach Affected Them
Wizkid vs Davido 5 things you need to properly enjoy the beef between Starboy and OBO
Quadri commands respect among top players – Adomeit
Cossy Orjiakor Our Drama Queen is back with more bosom After being away from the public eye for a while now, this actress is finally back with more booby ransom to give away.
Do Me, I Do You ‘I don’t believe in forgiveness; I pay evil with evil’- Abia native doctor [Video]
Nigerian student jailed for raping 12-yr-old girl in the UK Another Nigerian student in a UK university has been sentenced to five years in prison for raping a 12-year-old girl he met on the Internet.
Why Trump is still winning
14 amazing things Meghan Markle can’t post once she’s a Royal
Photos: Nigerian Man Drinks Mud Water In Fulfillment Of Promise He Made, Should President Buhari Return From London
WTH? 10-year-old becomes the youngest sugar daddy and he’s sponsoring a model way older than him