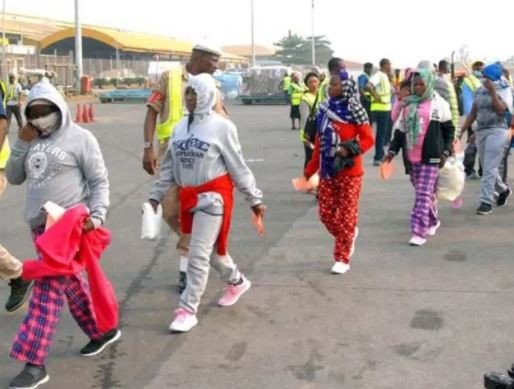 The National Emergency Management Agency (NEMA) has said a total of 6,672 Nigerians voluntarily returned from Libya from January 6, 2017 to December 28, 2017. The Director General of NEMA, Alhaji Mustapha Maihajja, made this known while receiving a fresh batch of 257 Nigerians who arrived from Libya.

Maihajja lauded the International Organisation for Migration (IOM) for their efforts at continuing the repatriation exercise even during the festive season. The DG who was represented by the Southwest Coordinator of NEMA, Alhaji Suleiman Yakubu, enjoined the returnees to join hands with various government agencies to tackle the problem of human trafficking in the country.

He said they should assist the government in identifying the traffickers who had lured and deceived many young Nigerians to embark on the perilous journey with the promise of taking them to Europe. Maihajja assured them that government would treat all information with utmost confidentiality and secrecy needed.

The DG also allayed their fears of facing “spiritual “consequences for exposing these evil persons, stressing that they had a duty to educate the public on what they went through in the volatile North African country. The new returnees arrived the Cargo Wing of the Murtala Muhammed International Airport, Lagos at 6.05pm aboard an Afriqiyah Airbus A330-300 with Registration number 5A-OMR.

They comprised 152 adult females, 82 adult males, nine children and 14 infants, with one having a medical case. The returnees arrived barely 24 hours after another batch of 157 Nigerians landed in the country from Libya where they had been stranded enroute Europe.

Boxing’s Best of 2017 features the biggest fights and biggest names that have stood out
Libya Slavery: Osinbajo meets NEMA, NAPTIP, National Commission For Refugees
Rwanda offers refuge to enslaved Libya migrants
‘My government will improve aviation infrastructure’ – President Buhari
Goodluck Jonathan I will make sure PDP returns to power in 2019 – GEJ
Slave trade aside, Libya starts voter registration ahead of 2018 elections
Pidgin English The language that unites 75m Nigerians
Libya Slave Trade NEMA boss lauds returnees for courage to face fresh start
Juliet Ibrahim warns boyfriend If you mess me up Ghanaians will deal with you
After IS, Libya yearns for normality
Tizeti partners Facebook to bring Nigerians affordable internet service The Express Wi-fi plans are affordable and range from N50 for 100MB to N2,000 for 10GB.
2018 Budget Passes 2nd Reading
AY Makun Comedian featured on CNN Marketplace Africa, talks hardships in Nollywood When asked about the impact of the recession in the country’s economy on business, AY noted that even his company suffered as did most companies in the industry.
‘The hopes of all Nigerians will become a reality in 2018’ – Atiku
Watch this runs-girl celebrating N100K pay off with nude video
In Pakistan Protests grow as military stays silent
Nigerians on twitter slam Okorocha for unveiling statue of Liberian President, Ellen J. Sirleaf in Imo State today