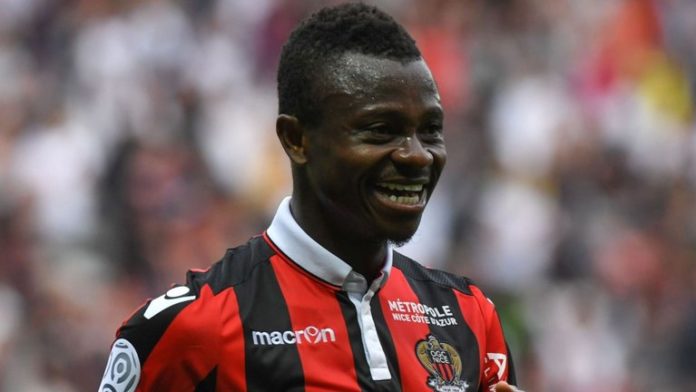 Manchester United are one of a number of clubs chasing Nice midfielder Jean Michael Seri, according to Sky sources.

The in-demand Seri joined Nice from Portuguese side Pacos de Ferreira in 2015 and is believed to have a release clause of around £33m in his contract, which expires at the end of next season.

United’s interest comes as they begin to plan for next season. They will be without Michael Carrick, who is retiring, while doubts remain over the future of Marouane Fellaini, who has six months to run on his deal.

Nice claim Seri came close to joining Barcelona in the summer only for the La Liga leaders to pull out of the deal at the last minute.

Club president Jean-Pierre Rivere said both parties had agreed terms on a £35m deal only for the Ivory Coast international to remain at Nice.

Seri has registered one goal and six assists in 26 matches for Nice this season, who are currently sixth in Ligue 1.

Aguero becomes joint-top scorer in Man City history
Russia to build $21bn nuclear facility in Egypt
‘House of Cards’ writers racing against the clock to rewrite show
“Touched by an Angel” star dies at 86
Mourinho says he has no idea when Pogba will be fit
Arsenal should be targeting Anthony Martial rather than Henrikh Mkhitaryan – Charlie Nicholas
Pacers too good for Kings in Indiana
EU’s Barnier gives Britain two-week deadline EU Brexit chief Michel Barnier on Friday handed Britain a two-week ultimatum to make concessions on a divorce agreement if it wants to unlock the next phase of talks in December.
How to Manage Slump Months When Your Income Fluctuates
Google Signs Patent Agreement With Tencent
Chelsea 1 Vs 0 Manchester United 5 things we learnt from Super Sunday game
Manchester United Signs Alexis Sanchez From Arsenal Now Set To Earn £350,000 Weekly
Ckay – Chukwu Ga Gozi Gi
Arsenal’s Alexis Sanchez arrives Manchester United for medical
Everton sacks manager Ronald Koeman following poor start to Premier League season
Juliet Ibrahim warns boyfriend If you mess me up Ghanaians will deal with you
“Game of Thrones” Watch every death on GOT in fan-made compilation Every 174,373 death scene on “Game of Thrones” has been compiled by a fan of the show.
Cardi B ‘lands first movie deal’ as she teases her ‘biggest dream might come true’
Geoffrey Kondogbia of interest as Tottenham scout for eventual Mousa Dembele replacement
EU’s Mogherini lobbies Congress to save Iran deal