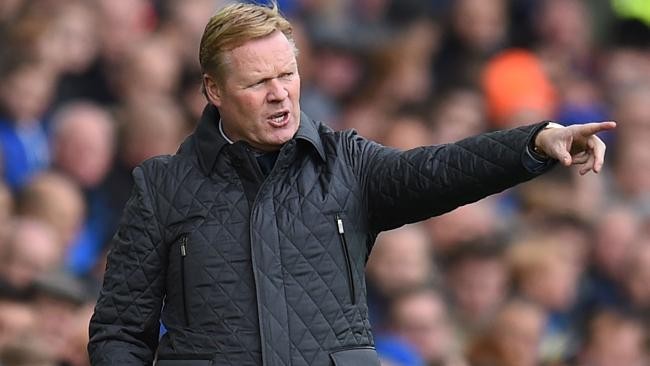 RONALD Koeman paid the price for Everton’s poor start to the season, losing his job with the team in the Premier League relegation zone despite spending about $200 million on new players.

The Dutchman was dismissed on Monday, two months into his second season in charge following a 5-2 loss to Arsenal on Sunday.

That left Everton without a win in its last five matches in all competitions.

The team has eight points in the league and is faring no better in Europe, sitting last in its Europa League group with one point from three games.

Everton returned to continental competition by finishing seventh in the Premier League last season and Koeman benefited from about £150 million ($198 million) in spending to strengthen the squad in the off-season to take the club to new highs.

Everton has sacked Ronald Koeman after a 5-2 loss to Arsenal. Picture: AFPSource:AFP

Gylfi Sigurdsson and Davy Klaassen cost almost 70 million pounds between them and striker Wayne Rooney was brought back from Old Trafford on a high-profile free transfer.

But Everton didn’t adequately replace Romelu Lukaku, who was sold to Manchester United for £75 million, and has struggled for goals this season, netting only six in the league.

Another £55 million was spent on goalkeeper Jordan Pickford and defender Michael Keane, yet Everton has conceded 18 goals in nine league games.

Only last-place Crystal Palace has a worse goal difference.

Now Everton is searching for a new manager to steer the club out of the drop zone.

“Chairman Bill Kenwright, the board of directors and major shareholder Farhad Moshiri would all like to express their gratitude to Ronald for the service he has given to the club over the past 16 months and for guiding the club to seventh place in last season’s Premier League campaign,” Everton said in a statement.

Koeman, a former Barcelona player who joined Everton after impressing as Southampton manager, is the third Premier League coach to lose his job this season after Frank de Boer at Palace and Craig Shakespeare at Leicester.