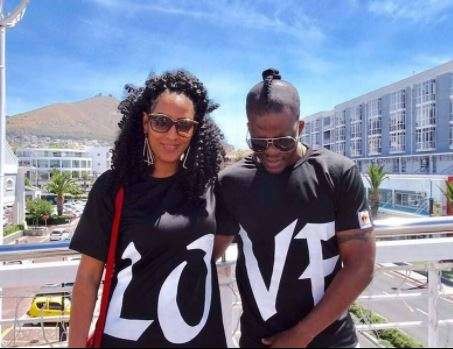 Juliet Ibrahim appears to be having the back of all her country people back in Ghana concerning her relationship.

The beautiful actress says that Ghanaians are ready to deal with her boyfriend and rapper, Iceberg Slim if he breaks her heart. She revealed this while granting an interview to a Ghanaian radio station, Joy FM.

“Ghanaians are listening, the whole country is behind me. If you mess up…if you mess up Iceberg Slim…I see the comments from my Ghanaian fans like ‘if you try it, if you mess Juliet up, we will deal with you,” the actress warned.

The couple also revealed how they met and fell in love during a trip to South Africa.

This is coming a few days after the celebrity couple shared a deep kiss on a live televisionprogramme, dropping the hints that these guys are going to be here for a long time.

These guys are never shy to show how much they care about each other as they have been seen in public giving themselves the public display of affection at all times. This was also noticed at comedy show they both attended on October 29, 2017, and as usual, Juliet Ibrahim was quick to share a red carpet picture on her Instagram page which she captioned

Recall a lot of people were of the perception that Iceberg Slim was exploiting Juliet Ibrahim. While in an interview with Vanguard Nigeria on September 16, 2017, Iceberg Slim was asked if he was using the Nollywood actress’ fame to rise to stardom, he unequivocally denied it saying;

“Rumour has it? I’ve never heard such, and besides, there will always be rumors when you’re in any form of spotlight. I’d never exploit anyone, for any type of gain. That would be extremely selfish and immoral. Such behavior goes against my code of ethics.”

The relationship between Juliet Ibrahim and Iceberg Slim has been on the lips of everyone, especially since they have become so public about their affairs. We hope and believe this is one relationship that will pass the test of time.

ARAMIDE: Why I admire Alicia Keys