EU’s Barnier gives Britain two-week deadline EU Brexit chief Michel Barnier on Friday handed Britain a two-week ultimatum to make concessions on a divorce agreement if it wants to unlock the next phase of talks in December. 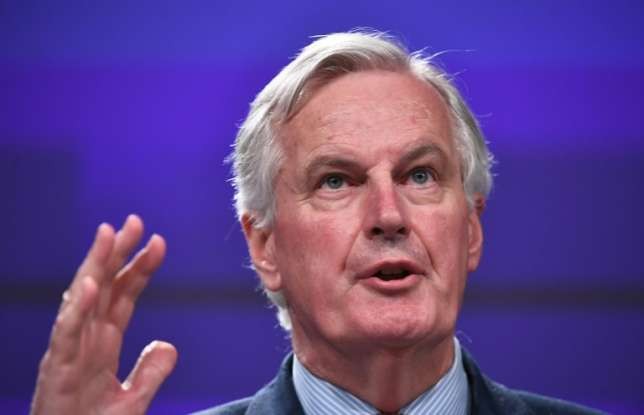 EU Brexit chief Michel Barnier on Friday handed Britain a two-week ultimatum to make concessions on a divorce agreement if it wants to unlock the next phase of talks in December.

Frenchman Barnier said it was “vital” for Britain to increase its offer on its exit bill — a figure senior EU officials put at up to 60 billion euros — to open up talks on a future trade deal.

The fate of the border between British-ruled Northern Ireland and the Republic of Ireland has also thrown an unexpected spanner into the works, with British negotiator David Davis ruling out the EU’s preferred solution.

“My answer is yes,” Barnier told a press conference at the end of the sixth round of talks in Brussels, when asked if he would need “concessions” from Britain within the next two weeks to move on.

“On the financial settlement, this is absolutely vital if we are to achieve sufficient progress in December. It is just a matter of settling accounts, as with any other separation,” the former European commissioner and French foreign minister said.

Barnier added that he was “following attentively” the political situation in Britain where a series of government resignations has further weakened the government of Prime Minister Theresa May.

EU leaders decided at their last summit in October that there was insufficient progress on three main divorce issues — the bill, Northern Ireland and the rights of three million Europeans living in Britain — to move on to the next stage.

They said they hoped to open talks on future relations and a post-Brexit transition period at their next meeting on December 14-15, but officials have warned that could now slip to February or March.

Hopes of a breakthrough at this week’s Brussels talks — the first since mid-October — were so low that they were cut to just one-and-a-half days from the normal four days.

Northern Ireland has reared its head in the discussions, with an internal EU paper for the talks suggesting that it should remain in the EU’s single market and customs union after Brexit to prevent a hard border with Ireland.

Davis insisted Friday that any Brexit deal cannot create a frontier between Northern Ireland, where a 1998 peace deal ended decades of sectarian unrest, and the rest of the United Kingdom.

“We recognise the need for specific solutions for the unique circumstances of Northern Ireland,” Davis said. “But let me be clear, this cannot amount to creating a new border inside the United Kingdom.”

Barnier meanwhile welcomed a British proposal on protecting the rights of EU nationals living in Britain after 2019, but said there were still differences on key issues.

There appeared to be little progress on the main sticking points: the rights of EU migrants to bring their families to Britain, their ability to send welfare payments to their home countries, and whether the European Court of Justice would have jurisdiction over those rights.

“On citizens’ rights we are making some progress although we need to move further on a number of points,” Barnier said.

The Brexit bill has been the main source of deadlock in the talks since they began in June. The EU says it must meet budgetary commitments totalling 50 to 60 billion euros, but Britain puts the figure nearer 20 billion.

Britain voted to leave the EU in a shock referendum result in June 2016. The government confirmed Thursday that Brexit day will be 2300 GMT on March 29, 2019.