“Touched by an Angel” star dies at 86 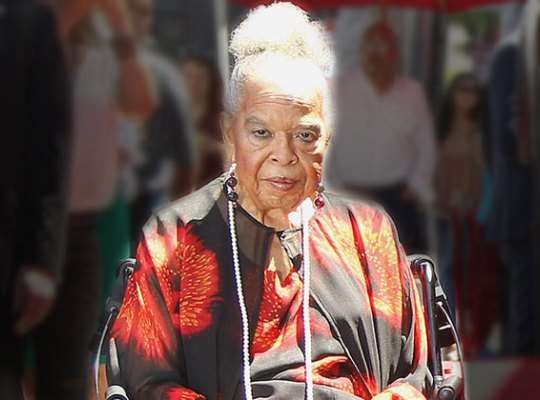 Della Reese has died at the age of 86.

The actress and gospel-influenced singer who found fame as Tess, the wise angel in the television drama “Touched by an Angel,” died on Sunday, November 19.

According to Reese’s co-star on the series, Roma Downey, the actress died peacefully on Sunday evening in her home in the Los Angeles area.

No further details were included in the statement.

Before “Touched by an Angel” made its debut in 1994, Reese was known mainly as a singer.

However, she had costarred on “Chico and the Man,” ″Charlie and Company” and “The Royal Family” and hosted her own talk show, “Della.”

“Touched by an Angel,” told the story of an apprentice angel (Roma Downey) and her supervisor (Reese) being sent to Earth to solve people’s problems appeared to have little chance in a TV world dominated by sitcoms and police dramas.

In her statement, Downey said: “Through her life and work she touched and inspired the lives of millions of people. She was a mother to me and I had the privilege of working with her side by side for so many years on ‘Touched By An Angel,”

“I know heaven has a brand new angel this day.”

Reese is survived by her husband, Franklin Lett, and three children.

May her soul rest in peace.

I Used to Take Marijuana, Codeine and Hard Drugs – Popular Nollywood Actress, Toyin Abraham
Swiss prosecutors rule out charges in new Polanski rape claim
Photos: Singer Jidenna lands in Nigeria surrounded by heavy security
5 sacrifices you MUST make as an entrepreneur
The Weekend- SZA
Juliet Ibrahim warns boyfriend If you mess me up Ghanaians will deal with you
TY Bello – Be Quiet [Ft. Sinach, George, Spirit Of David] || @tybellotweets @Sinach
Samsung Galaxy J7 smartphone reportedly blows up in mid-air flight The story is going by a possible theory that the user of that Samsung phone may have caused the incident.
LISTEN/DOWNLOAD: Jeff Akoh – Lokoja [ALBUM]
Chelsea 1 Vs 0 Manchester United 5 things we learnt from Super Sunday game
R.Kelly took two of his girlfriends to Snoop Dogg’s wife’s party…(photo)
I’m single and flirting, I masturbate or walk up to any guy for sex – Nollywood actress Omalicha Elom
Donald Trump US President tells Paris, Berlin to ‘keep making money’ via trade with Tehran US President Donald Trump said in an interview aired Sunday he does not object to France and Germany continuing trade with Iran, despite his refusal to certify the Iran nuclear deal.
Lady Gaga puts on very sexy display as she arrives for World Series game in LA (Photos)
In Australia Lost diver swam miles to shore stalked by shark A diver separated from his boat off the coast of Australia said Sunday he was lucky to be alive after being forced to swim miles back to shore — shadowed by a large tiger shark.
Oritsefemi Singer announces November wedding date! The official countdown to Mr. Gomina &amp; Nabila’s wedding has begun!
Iyanya – Iyanu (Holy Water)
England seek to wear poppies against Germany
Christina Aguilera shares semi-nude throwback photos of herself
Share
Facebook
Twitter
WhatsApp
Pinterest
Linkedin
ReddIt
Email
Print
Tumblr
Telegram
Mix
VK
Digg
LINE
Viber
Naver
Previous articleOdunlade Adekola signs out of Unilag
Next articleOsinbajo to inaugurate projects in Kwara