Pacers too good for Kings in Indiana 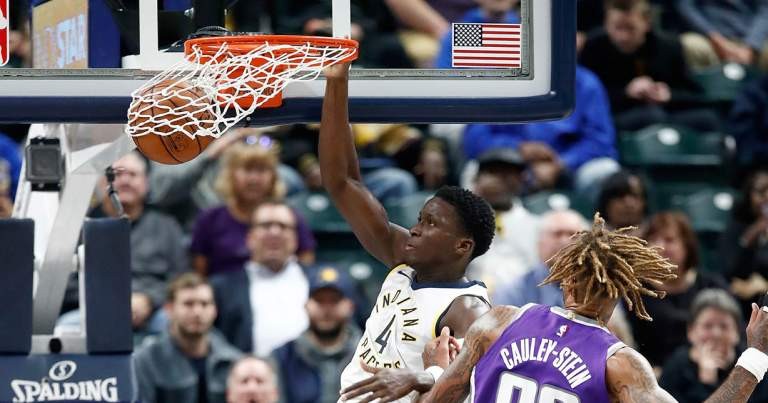 The Indiana Pacers (4-3) reached into their bag of tricks on Tuesday night, spooking the Sacramento Kings (1-6) and treating the fans to a 101-83 victory on Halloween night at Bankers Life Fieldhouse.

With Thaddeus Young (15 points, four rebounds, and four steals) and Domantas Sabonis leading the way (12 points, 16 boards, and five assists), the Blue & Gold dominated Sacramento from start to finish for their second consecutive win and their third in four games.

The Pacers limited the Kings to just 48 points through three quarters, turning in far and away their most dominant defensive performance of the season.

“Defensively, we’re getting better each and every day,” Young said.

Young, the Pacers captain, was one of the catalysts of the defensive attack. According to NBA.com, he entered the night leading the NBA in deflections per game at 4.9 and again was all over the floor.

“One thing about Thad, you know he always has your back,” Pacers guard Victor Oladipo said. “And when you know someone’s always [hustling] like that, you have the pressure to have their back, too.”

Coming off an impressive victory over San Antonio on Sunday, the Pacers picked up where they left off from the opening tip on Tuesday.

Indiana scored the game’s first nine points and eventually opened up a 17-4 lead. Sabonis was especially impressive, racking up six points and nine rebounds in the first 7:33 of the contest, despite battling an upper-respiratory infection.

The Kings, on the other hand, looked like they would rather be out trick-or-treating. Sacramento missed 12 of their first 14 shots and notched up only 13 points in the first quarter, the lowest points total by a Pacers opponent in any quarter this season.

The Blue & Gold kept their foot on the gas in the second quarter, reeling off an 11-0 run over a two-minute stretch to extend the lead to 23. Sabonis already had his fourth double-double of the season midway through the frame.

The outcome was never in doubt after halftime, as the Kings never got closer than within 15 points of the lead and Pacers head coach Nate McMillan was able to mostly rest his starters in the fourth quarter.

The highlight of the fourth quarter was the late-game performance of Pacers second-round pick Ike Anigbogu, the youngest player in the NBA.

Anigbogu scored his first points of his professional career on a pair of free-throws, later knocked down a jumper, then sent the Pacers’ veterans on the bench into hysterics with an emphatic block of Kings guard Frank Mason in the closing seconds.

“I’m proud of him,” Oladipo said. “A lot of guys do a lot of the cheering. [The starters] got to do the cheering today. It’s an awesome feeling.”

Five Pacers players scored in double figures in the win.

The extra rest the Pacers’ key players were able to get down the stretch could come in handy on Wednesday night, when Indiana travel to Cleveland to face off against LeBron James and the Cavaliers on the second night of a back-to-back.

“Any time we can gain some momentum going into these type of situations where we’re going to be on the road … we definitely need that fire and that energy that we’ve played with these past couple games,” Young said.

Sabonis’ 16 rebounds were four more than his previous career high, which was set earlier this season on October 21 in Miami and then matched in Sunday’s win over San Antonio.

Sabonis also matched his career high with five assists. He also had five dimes earlier this season on October 24 in Minnesota and last season on November 5, 2016.

After starting the season 3-for-15 from 3-point range, Bojan Bogdanovic has now made three 3-pointers in consecutive games on 11 total attempts.

For the first time this season, Oladipo did not lead Indiana in scoring. He played a team-high 28 minutes and was 4-for-10 from the field.

The one area where Sacramento had success was in the paint, where they outscored Indiana 56-40.

Stat of the Night

Sabonis has now collected 11 or more rebounds in five consecutive games. He never had more than 10 rebounds in 81 games as a rookie last season with Oklahoma City.

– The Pacers have now won three straight games over Sacramento and lead the overall https://wowplus.net/premier-league-guardiola-encouraged-man-city-maintain-lead-manchester-city-manager-pep-guardiola-heartened-way-side-stayed-five-points-clear-top-premier-league-table-de/series against the Kings, 47-39.

– Forward Alex Poythress scored his first points as a member of the Pacers, knocking down two 3-pointers over the final two minutes of the win.

– Former Pacers guard and Broad Ripple High School and IUPUI star George Hill had eight points on 4-of-12 shooting and six rebounds in his first game in The Fieldhouse as a member of the Kings.