Haley on Trump accusers: ‘We should all be willing to listen to them’ 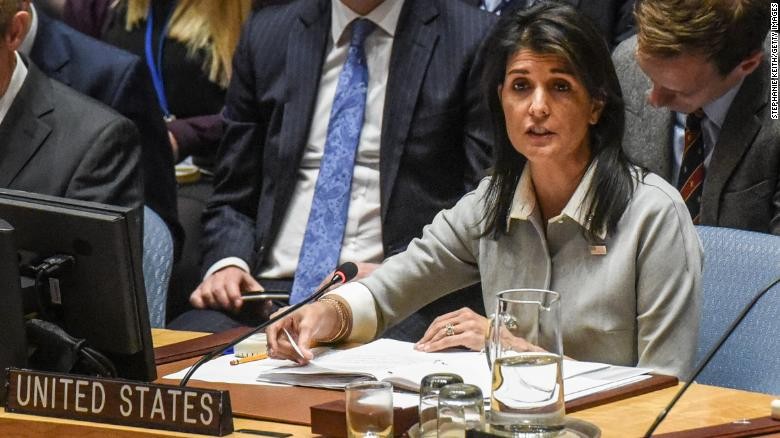 Haley on Trump accusers: ‘We should all be willing to listen to them’

US Ambassador to the United Nations Nikki Haley delivers a speech during a United Nations Security Council meeting on December 8, 2017 in New York City.

Washington US Ambassador to the United Nations Nikki Haley said Sunday that any women who speak up about inappropriate sexual behavior “should be heard,” including President Donald Trump’s accusers.

Speaking on CBS’s “Face the Nation,” Haley was asked by moderator John Dickerson about the cultural reckoning that is happening on the issue of sexual harassment and assault, including the recent resignations of three members of Congress who have been accused of sexual misconduct.
Haley said she was “incredibly proud of the women who have come forward.”
“I’m proud of their strength,” she added. “I’m proud of their courage. And I think that the idea that this is happening, I think it will start to bring a conscience to the situation, not just in politics, but in, you know, we’ve seen in Hollywood and in every industry. And I think the time has come.”
In addition to the infamous 2005 “Access Hollywood” recording of Trump bragging about groping women that surfaced during the 2016 campaign, several women have accused Trump of sexual harassment.
Trump attributed his language on the tape to “locker room talk” and has denied any sexual wrongdoing.
When asked about Trump’s accusers by Dickerson on Sunday, Haley said the women should be heard.
“Well, I mean, you know, the same thing, is women who accuse anyone should be heard,” Haley said. “They should be heard and they should be dealt with. And I think we heard from them prior to the election. And I think any woman who has felt violated or felt mistreated in any way, they have every right to speak up.”
The accusations against Trump have recirculated with the current conversation about sexual harassment in Congress and allegations against Alabama Senate candidate Roy Moore, who is accused of pursuing relationships with teenagers, molesting a 14-year-old and sexually assaulting a 16-year-old when he was in his 30s.” Moore has repeatedly denied the allegations.
Despite accusations against Moore, Trump endorsed the controversial Republican candidate ahead of Tuesday’s election.
When asked last month about the allegations against Trump, White House press secretary Sarah Sanders said: “Look, I think that this was covered pretty extensively during the campaign. We addressed that then. The American people, I think, spoke very loud and clear when they elected this President.”
Haley echoed the statements from the White House about the accusations, telling Dickerson that whether the issue was settled during the election is “for the people to decide.”
“You know, that’s for the people to decide,” Haley told Dickerson when asked if it was a settled issue following the election. “I know that he was elected. But, you know, women should always feel comfortable coming forward. And we should all be willing to listen to them.”
Two former intelligence chiefs blast Trump over Russia comments
Trump all but endorses Roy Moore
Trump emissions threat to US car industry
I’m single and flirting, I masturbate or walk up to any guy for sex – Nollywood actress Omalicha Elom
US to stop arming anti-IS Syrian Kurdish YPG militia – Turkey
Donald Trump lashes out at LaVar Ball for being ungrateful for his son’s release for shoplifting in China
Trump’s Mar-a-Lago Thanksgiving
‘My name is Kunle Remi and not Adesua’s ex’ Nollywood actor reacts to reports claiming he was once Mrs Wellington’s boyfriend
Former Minister of Foreign Affairs, Oluremi Adeniji, dies at 83
Why Trump is still winning
Tyrese threatened The Rock’s daughters on social media
Ivanka Trump US President’s daughter urges India to boost women in workplace
Source: White House wanted to publicly shame Tillerson
Jennifer Lawrence Talks to Oprah Winfrey About Dealing With Abuse on Set and Reclaiming Her Sexual Freedom
Marijuana Why do we trip when we see women smoke weed?
10 things Nigerian women don’t know about Nigerian men There are a lot of things for women to figure out in men, here are ten of them

‘My husband tied me to tree’