‘My husband tied me to tree’ 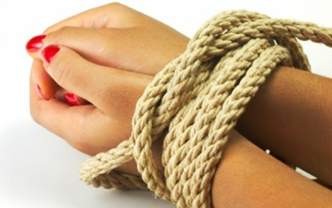 A housewife, Fausat Akinola, has told a Grade `C’ Customary Court in Agodi, Ibadan that her husband of 15 years, Mr. Sarafa Akinola, tied her to a tree in front of their home.

The woman, a mother of three, was giving evidence in a divorce suit filed by her husband.

“My lord, I support the dissolution of our marriage because my husband tied me to a tree in our house.

“There was a day he threw me inside a cesspit. I was rescued by a neighbour.

“He treated me like a slave and was fond of beating me up whenever we quarrelled.

“Dissolution of the marriage is a freedom from brutality. It will save me from untimely death. I’ve packed out of his home,” the respondent said.

Sarafa told the court that Fausat was stubborn and disobedient.

He said the respondent and his three children packed out of his home to an unknown destination without informing him.

The petitioner implored the court to order the respondent to bring back the children so that he could take care of them.

He denied tying her to a tree.

“I did not throw her inside a cesspit,” Sarafa added.

Delivering judgment, the President, Chief Mukaila Balogun, said there was no basis to deny the divorce request, since both parties had agreed to end the union.

He dissolved the marriage and gave custody of the three children to the petitioner.

Balogun said the evidence of the respondent showed she will not be able to take care of the children.

He ordered the petitioner to take care of the children.

In Afghanistan US soldier killed in helicopter crash A US soldier died after the helicopter they were in crashed in Afghanistan, foreign forces said Saturday, denying Taliban claims that it had shot down the aircraft.
We really love each other but our parents are being difficult
Tiwa Savage Singer says God saw her through the trying times of her marriageTiwa Savage Singer says God saw her through the trying times of her marriage
For Men 6 conversations you shouldn’t have with anyone but bae Every man who respects his partner and relationship should learn where to draw the line when conversing with other women.
In Japan ‘Black Widow’ to hang for murder A one-time millionairess dubbed the “Black Widow”, who tricked elderly lovers into drinking cyanide and then pocketed millions in insurance payouts and inheritance, was sentenced to death in Japan on Tuesday.
Trump Jr US President’s son hinted at review of Russia sanctions act, says lawyer A Russian lawyer has said Donald Trump Jr suggested in a meeting during the US presidential campaign that a law imposing sanctions on Russia could be reviewed if his father were elected.
Jill Scott ends 1-yr marriage with husband
Egg intake doesn’t cause heart attack – PAN
Nigerian student jailed for raping 12-yr-old girl in the UK Another Nigerian student in a UK university has been sentenced to five years in prison for raping a 12-year-old girl he met on the Internet.
Punk group attack ‘police state’ on Trump anniversary
German court gives Swiss tax spy suspended sentence, fine
House Passes Children’s Health Bill, Sending Measure to Senate
Kim K &amp; Kanye West sell the Bel-Air mansion they bought for $9m to a philanthropist for $17.8 million
When my father was sick, Bianca chose not to take care of him, rather she pleased herself’ – Ojukwu’s first son, Emeka Jnr speaks
We’ll facilitate Joshua’s visit to Nigeria – Ogun govt
Mother sells daughter for N280,000 to pay debt
Premier League Merseyside misery as Liverpool and Everton lose heavily Defensive frailty has long been a problem for Liverpool and they found themselves 2-0 down inside 12 minutes as Spurs…
2 men arrested for murder of 26 Nigerian girls, women killed in In Italy sea
Simon Cowell rushed to the hospital after fainting at home
Share
Facebook
Twitter
WhatsApp
Pinterest
Linkedin
ReddIt
Email
Print
Tumblr
Telegram
Mix
VK
Digg
LINE
Viber
Naver
Previous articleWoman in court for alleged stealing fraud
Next articleNUPENG to FG: Tell Nigerians why fuel is scarce