Washington (CNN)President Donald Trump on Tuesday defended embattled Alabama Republican Roy Moore, all but endorsing the Senate candidate who has been accused of sexual assault.

“He denies it. Look, he denies it,” Trump said of Moore. “If you look at all the things that have happened over the last 48 hours. He totally denies it. He says it didn’t happen. And look, you have to look at him also.”
Several women have come forward and accused Moore of pursuing romantic relationships with them when they were teenagers and he was in his 30s, and several others also have accused him of assault.
He has denied the allegations. 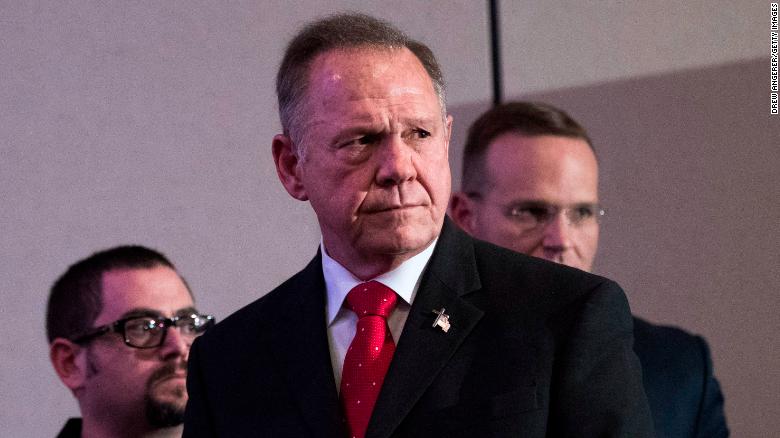 Roy Moore says he first noticed his wife when she was 15 or 16 years old
The President also expressed vehement opposition to Doug Jones, the Democrat in the race and Moore’s only major opponent.
“We don’t need a liberal person in there, a Democrat, Jones. I’ve looked at his record. It’s terrible on crime. It’s terrible on the border. It’s terrible on military,” Trump said. “I can tell you for a fact we do not need somebody who’s going to be bad on crime, bad on borders, bad for the military, bad for the Second Amendment.”
Trump’s comments mark the first time he has publicly positioned himself on the matter and mark a stark contrast from the more than a dozen Senate Republicans, including Senate Majority Leader Mitch McConnell, who called on Moore to drop out of the race. The campaign arm for Senate Republicans and the Republican National Committee have also severed ties with Moore.
Trump’s own daughter offered up an unambiguous rebuke to Moore last week.
“I’ve yet to see a valid explanation and I have no reason to doubt the victims’ accounts,” Ivanka Trump told The Associated Press. “There’s a special place in hell for people who prey on children.”
But the White House signaled on Monday that its position was shifting away from the mainstream of Republican leaders, as White House counselor Kellyanne Conway signaled the need for Moore’s vote on tax reform was more important in the administration’s calculation than the sexual misconduct allegations leveled against him.
White House press secretary Sarah Sanders has said Trump found the allegations against Moore “very troubling,” but believed Alabama voters should decide Moore’s fate. 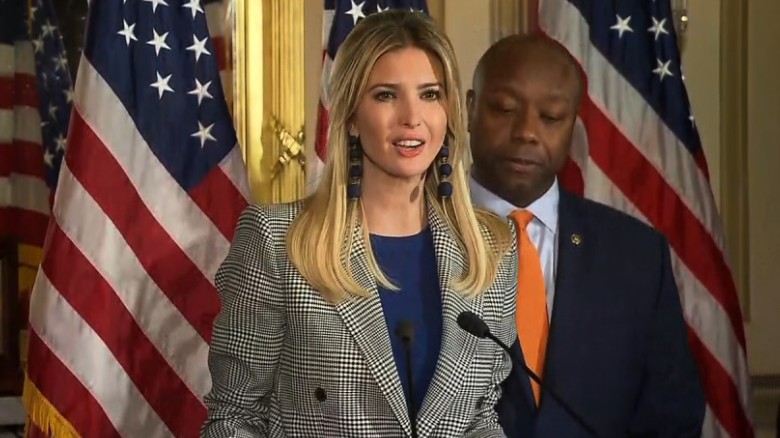 Ivanka Trump slams Roy Moore: ‘There’s a special place in hell for people who prey on children’
Still, Sanders and other White House officials have highlighted the fact that Trump has not campaigned with Moore.
But Trump on Tuesday left the door open to campaigning with Moore.
“I’ll be letting you know next week,” he said, when asked whether he will campaign with Moore.
Trump repeatedly emphasized that Moore has denied the allegations brought against him.
Trump declined to say whether he believed Moore’s denials, but when asked he again pointed to the denials.
“Well, he denies. I mean, he denies. I mean, Roy Moore denies it. And by the way, it is a total denial. And I do have to say 40 years is a long time. He’s run eight races and this has never come up. Forty years is a long time,” Trump said, pointing to the amount of time that has passed since the alleged behavior.
At an Alabama event on Tuesday, spokespeople for Moore denied the allegations against the candidate but refused to answer questions as women come forward about Moore’s past.
“We believe Judge Moore,” Moore campaign strategist Dean Young said. “We don’t believe these women. It’s just that simple. And y’all can keep trotting them out if you want to.”
Young said he advised Moore not to lend credence to the questions either and dismissed the allegations — which range from inappropriate behavior to pursuing teenage girls while he was past the age of 30 to sexual assault — as “Jerry Springer stuff.”
Ben DuPré, who identified himself as a longtime Moore ally, said the former judge is “above reproach.”
“We don’t believe a word of these lies,” DuPré said of the allegations.
Trump-Russia Indictments, guilty plea in probe: What we know Two former Donald Trump associates were indicted Monday and it was revealed another has pleaded guilty to lying to FBI investigators, in the first substantial legal action stemming from the probe into Russia’s US election interference.
Pence US VP says 1983 bombing was opening salvo in ‘war on terror’ US Vice President Mike Pence described the 1983 bombing of a Marine Corps barracks in Beirut as the opening shots of the “war of terror” Monday, as he issued fresh warnings to Iran and Hezbollah.
Antonio Guterres Trump says UN boss doing ‘very very spectacular job’ US President Donald Trump jettisoned his past criticism of the United Nations Friday, as he lavished praise on the organization’s Secretary General.
White House says Trump, Duterte ‘briefly’ discussed human rights but Philippine spokesman says they didn’t
‘My husband tied me to tree’
US President to decide on North Korea terror list after Asia trip
Woman accuses Moore of sexually assaulting her at 16
Robert Mueller Straight-shooting former FBI chief Robert Mueller, the former FBI director heading the probe into alleged collusion between the Trump election campaign and Russia, has earned a reputation of being a straight shooter who could be right out of Hollywood’s central casting.
United States US Congress passes $36.5bn in hurricane, wildfire aid The US Senate on Tuesday approved a $36.5 billion disaster relief package for hurricane-affected communities like Puerto Rico and for areas devastated by wildfires, sending the bill to President Donald Trump for his signature.
Report says Trump backed a bizarre grassroots campaign to smear Jon Bon Jovi
Police nab suspect operating with master key
Trump plays round of golf with ‘wonderful people’ Shinzo Abe &amp; Hideki Matsuyama