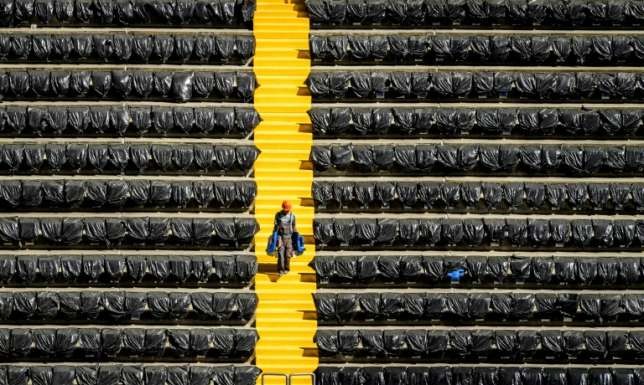 Russia is gearing up to host the World Cup for the first time while facing the herculean task of eradicating racism and hooliganism and warding off the threat of a terror attack.

Russia is gearing up to host the World Cup for the first time while facing the herculean task of eradicating racism and hooliganism and warding off the threat of a terror attack.

Organisers also face the tricky task of appeasing beleaguered fans and President Vladimir Putin, who helped wrest the June 14-July 15 tournament from England in a controversial FIFA vote in 2010 and then gave many of the 11 host cities their first post-Soviet facelift.

It is an $11.5-billion (9.6-billion-euro) gamble with the potential to backfire if it leaves behind “white elephant” stadiums and hotels that fall into disuse and fail to turn Russia into the tourism mecca it has always dreamed of being.

The logistical challenge of the 2,500 kilometres (1,550 miles) separating the western-most stadium in Kaliningrad near Poland and the most easterly one in the Urals city of Yekaterinburg — the same distance as that between Paris and Moscow — will also test fans’ resolve.

And friction between Russia and the West over Syria and Ukraine make this year’s addition of what is arguably the world’s biggest sports event one of the most diplomatically-charged World Cups in decades.

The draw on Friday in the Kremlin will determine just how heated the group stage matches will be.

play Russian football has long been plagued by hooliganism

Russian football has long been plagued by hooliganism in which “ultras” pre-arrange fights featuring everything from knives to bats, while racism has become especially pronounced with the infusion of foreign players once the Iron Curtain fell.

Brazilian striker Hulk said he heard monkey chants at “almost every match” when he led Zenit Saint Petersburg to a title and two second-place finishes between 2012 and 2016.

Manchester City midfielder Yaya Toure — himself the subject of fan abuse when his club played at CSKA Moscow in a Champions League game in 2013 — warned this month that “if racism situations happen in Russia, it is going to be a big mess”. His nation, Ivory Coast, have not qualified.

Russia’s football governing body has been trying to clean up its act and organisers say they recorded no racist episodes when they hosted the Confederations Cup — the World Cup warmup — this year.

But intertwined with that scourge is hooliganism — a culture deeply rooted due to some clubs’ affiliation with rival wings of the armed forces as well as the inherent ill will between Moscow and the largely neglected provinces.

Hooliganism experts say Russia’s powerful FSB security service has cracked down hard on football gangs and blacklisted many of its leaders as the World Cup nears.

Authorities will want to avoid the scenes in Marseille during Euro 2016 when Russian hooligans beat up England fans, leaving some in hospital.

play As they gear up for the World Cup, Russian authorities will want to avoid the scenes in Marseille during Euro 2016 when Russian hooligans beat up England fans, leaving some in hospital

The threat of terror is ever-present and potentially growing because of Russia’s military support of Syrian President Bashar al-Assad.

A Saint Petersburg metro bombing that killed 15 in April was just the latest of the numerous strikes to have hit much of Russia since the 1990s.

Yet the estimated 2,900 Russian jihadists who have fought alongside the Islamic State group and are now making their way back home are not the only danger.

The entire city has since been on heightened alert.

“Plus, we have installed and are continuing to install video camera where — online — we can monitor every single street,” he told AFP.

Perhaps the biggest concern to Russians themselves is the fate of their team — a squad that has so often underperformed despite having Europe’s largest potential talent pool.

Singer Mikhail Boyarsky, a Soviet-era legend who is omnipresent on Russian TV and something of a self-appointed football expert, was blunt.

“I doubt we will get very far,” he told the Sovetsky Sport paper. “There are no miracles in sport.”

Something close to that happened at Euro 2008 when Russia stunned the Dutch and made the semi-finals.

Russia were then thrashed 3-0 by eventual champions Spain and have wallowed in misery ever since.

The current squad’s problem is twofold: they have no stars and must perform under the stern gaze of a black-belt judo president who does not take losing lightly.