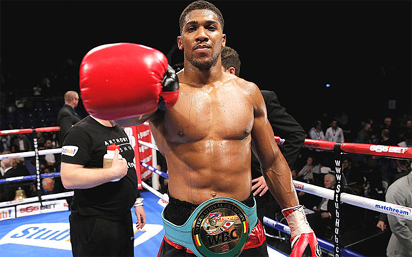 The Executive Governor of Ogun state, His Excellency Ibukunle Amosun and the Minister of Youth and Sports Barrister Solomon Dalung are among a top Nigerian government delegation who will be at the ringside on Saturday night October 28, 2017 to cheer Anthony Joshua against Carlos Takam in an IBF and WBA challenge billed for the Principality Stadium in Cardiff.
The Minister of Information and Culture Alhaji Lai Mohammed is also on the Federal government’s entourage.

This move which was at the behest of the Ogun state government is geared at supporting the reigning IBF champion who hails from Sagamu when he faces the former WBC Silver heavyweight champion.
Takam replaced Joshua’s original challenger Kuburat Pulev who made a last minute withdrawal following a shoulder injury.

Dalung said that with the 2 West African neighbours having a healthy rivalry in the sporting world, Nigerians will be happy if Anthony Joshua defeats the 2003 All-Africa Games bronze medalist.

“Of recent, Nigeria has enjoyed the upper hand against its West African neighbours Cameroon. The Super Falcons defeated the Indomitable Lioness in their backyard to claim the 2015 CAF Africa Women Cup of Nations. Few weeks ago, the senior men’s basketball team beat Cameroon to advance to the semifinals of the FIBA Africa Cup Championship. The success of the Super Eagles against the Indomitable Lions where they snatched 4 points from the available 6 points to qualify for the 2018 World cup is still fresh in our memories.

“Another win by Anthony Joshua will confirm our superiority and how far our sportsmen have gone in recent years.”
A confident Joshua who took part in Wednesday’s open workout session at the St David’s Hall in Cardiff has promised to give his fans something to cheer about as he defends his world titles.
Despite being a last minute replacement for Pulev, Joshua will not be expecting an easy ride against Takam who has recorded 35 wins and just 3 losses in the 39 fights as a professional since 2005.

“I will be conveying the goodwill message of his Excellency, President Muhammadu Buhari to him when I see him after the fight. It is imperative for him to understand how much the government and the people of Nigeria are proud of his achievements as our son.”

The current unified world heavyweight champion, having held the IBF title since 2016, and the WBA (Super) and IBO titles since April 2017 boasts of a flawless professional record of 19 fights, 19 victories and all of them coming through knockouts.