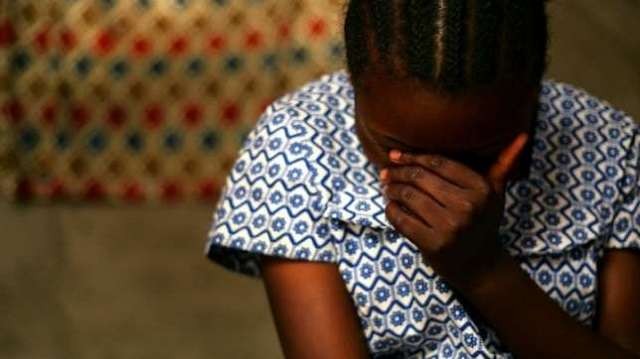 It was a shocking revelation session when a 13-year-old girl narrated to the police how her uncles, Saviour Philip, 35, and 17-year-old Paul Philip, took turns to rape her whenever her mother who lives with them, was away.

The young victim, according to Vanguard Newspaper, made disclosure after the suspects were arrested by operatives of the Lagos Police Command following a complaint lodged by her mother.

The girl told the shocked officers that whenever her mother who had to move into her brother’s one-room apartment on Olowolagba Street, off Odunsi, Bariga area of the state after they were evicted from their house, the uncles would take turns to rape her and her eight-year-old cousin also living with them.

It was gathered that the young victims and their mother moved into the suspects’ apartment about five months ago due to their parents’ inability to get an accommodation, which also forced the woman identified as Ekaette, to withdraw the children from school.

The victim, a Junior Secondary School 2 [JSSII] pupil who spoke to newsmen on the incident, said that her uncles often threatened to kill her and the cousin if they told anyone about the sexual assault.

“It was Uncle Paul who started it. He usually did it in the afternoon when my mother and other tenants were away. I was ‘arranging’ my siblings’ clothes one afternoon when he came from behind, lifted me and dropped me on the floor.

He covered my mouth when I wanted to shout. When he was done, he threatened to kill me if I told my mother or anyone.

When he is finished with me, he would call my little cousin inside and asked me to stay outside. At times, I would see him dipping his fingers into my cousin’s private part.

Paul is in SSS 3 but he said that he didn’t like going to school, particularly on the day he wanted to do it.

Saviour also did it. But in his case, he penetrated my anus. The first day he did it, I shouted because of the pains, but he covered my mouth with clothes.

When he was done, he brought out juju and said that he will invoke it to kill me if I tell anyone.

I refused to tell anyone because I was afraid to die. Even when I threatened to tell my mother, Paul boasted that she will not do anything to him and that if I did, they would chase us out of the house.”

The girl said she summoned the courage to tell her mother the day she beat her for insulting Paul.

“I was forced to open up two weeks ago after my mother beat me because of Paul. She overheard me insulting Paul.

Instead of asking me why, she picked up a heavy stick and started beating me with it and at the same time, reminded me that Paul was not just my relation, but my senior as well.

Out of annoyance, I summoned up courage and told my mother that the reason why I was rude to Paul was because he and his elder brother had been sleeping with me.

At that point, she held Paul’s shirt, shook him and at the same time demanded to know how true my claim was.”

The mother who corroborated her daughter’s claim, said she reported the case to the Bariga Police Division which led to the arrest of the suspects.

She stated that while at the station, her twin sister whose eight-year-old daughter was later discovered to also have been assaulted, visited the suspects’ mother’s shop to report the matter, only to be beaten up.

Paul and Saviour are my relatives. I moved into their apartment with my daughter, niece and unborn baby, pending when we will get an accommodation, while my husband was putting up with his friend.

This wicked act started in June when I went to deliver in the hospital. I never suspected they could do such a thing to these children each time I left them in their care because we are related.”

According to the State Police Public Relations Officer [PPRO], ASP Olarinde Famous-Cole, the case has been transferred to the Gender Unit of the Police Command and that the suspects have been to Magistrate Court 2 in Ikeja.

At the initial hearing, the suspects were granted a bail of N400,000 but when they could not meet the conditions, Paul was remanded at a forester home in Abeokuta, Ogun State, while Saviour was remanded at the Kirikiri Prisons, with the case adjourned to December 4, 2017.

In Yola Police arrest 200 cows for invasion of farm He also commended the herdsmen for accepting responsibility for the destruction by their cattle and their commitment to pay for the damages.