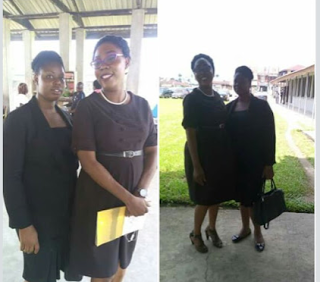 The International Federation of Women Lawyer (FIDA) Bayelsa branch on Tuesday, November 28, secured the conviction of a man who was arraigned in court for raping a physically challenged six-year-old girl.

FIDA shared the good news on its Facebook page,

“All he wanted was justice for his daughter, who was defiled and left to die in a shrine in one of the communities in Bayelsa State. The daughter, barely six years old was dragged into the bush and was disvirgined in the most unforgettable way. The innocent girl  who is physically challenged  and cannot even speak was rescued by passers by in a pool of her own blood. The perpetrator was convicted today. Kudos to Fida Bayelsa, kudos to Barr Roselyn. Well done.” 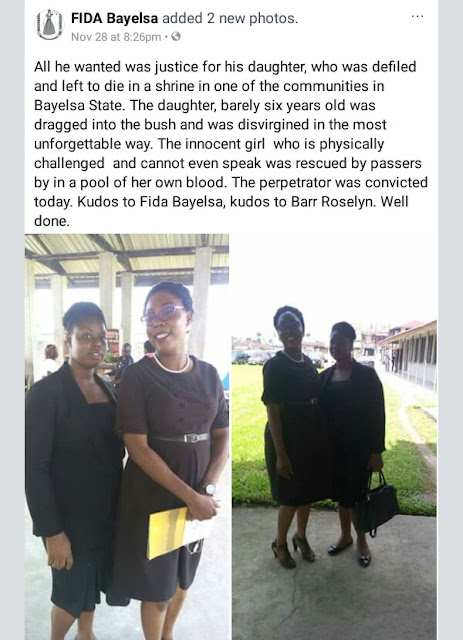 ‘It’s better to be single than being in a relationship where you still feel very much alone’ – Omowunmi Akinnifesi advices Ladies
Man commits suicide in Delta after girlfriend dumped him
Tyrese threatened The Rock’s daughters on social media
NSCDC arrests 5 persons with 2 truckloads of suspected stolen diesel In Delta State
Lol. T.I embarrasses his daughter on Instagram for sharing a sexy photo
Touching video of 8-year-old girl who suffered a brain aneurysm responding to her mother’s voice in the hospital
Lol…you guys play too much….
Watch this runs-girl celebrating N100K pay off with nude video
Police nab suspect operating with master key
policeman who arrested Evans shot dead by kidnappers In Lagos
Wayne Rooney’s party girl Laura Simpson makes a joke about the size of his manhood on Twitter, compares him to ‘Shrek’
Woman accuses Moore of sexually assaulting her at 16
David Moyes West Ham appoint former Everton boss as new manager
Photos: Lagos Police Commissioner leads task force to visit Apapa-Kirikiri traffic gridlock
See the shocking thing a woman did to her stepdaughter in Lagos
Founder of world famous Gay dating site, Henry Badenhorst dies in South Africa
In Bayelsa Police draft 16 gunboats, 6, 000 policemen to creeks
See how billionaire businessman Tony Elumelu spent his weekend (photos)
Self Defence ‘I killed my uncle when he tried to rape me’ – Murder suspect The police in Enugu State have arrested a young girl who killed her uncle when he attempted to rape her in his house.
Share
Facebook
Twitter
WhatsApp
Pinterest
Linkedin
ReddIt
Email
Print
Tumblr
Telegram
Mix
VK
Digg
LINE
Viber
Naver