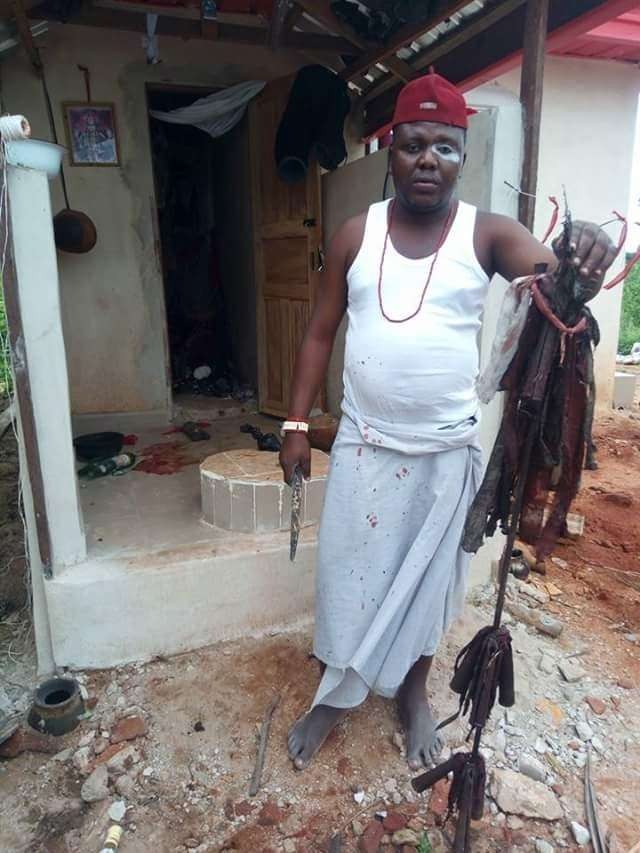 A young native doctor popularly called Dibia from Abia State, has been in the news in the past few days since he posted on his Facebook wall that he does not believe in forgiveness as he pays evil with instant evil.

The swanky native doctor who goes by the name Chi Marine Temple on his social media account, has sworn that anyone who tries some funny stuff with him will also meet the same repercussion as he does not believe in the word forgiveness.

According to a post, he shared, paying evil for evil is the tenet he lives by and he not going to change that for anything.

The young dibia also added that he does not mind being called the devil and his mantra is repaying ‘bad with bad’ because he doesn’t understand why anyone who wants bad things to befall others should get forgiveness in exchange.

Chi Marine Temple stepping out without his regalia  (Facebook)

On another post, the millennial dibia took a swipe at people who frown at his way of life where he posts videos of himself in a club enjoying himself, saying that the fact that he is a native doctor does not mean he should not enjoy himself.

Chi Marine Temple is not a man to forgive, so beware  (Facebook)

“So because I am a native Dr. I should not have fun, I am not one of those Pastors that sleep with people’s wives.

And I am not ready to sleep with another man’s wife because it is called Alu.

For your information, Mr. Poster, I am going to club on Friday with her. Meet me at Grand Hotel.”

The Abia State-born dibia has certainly brought some modernization into his trade as he has a penchant for posting photos and videos of himself and practice on the social media and has a lot of followers who support what he does.

Nigerian student jailed for raping 12-yr-old girl in the UK Another Nigerian student in a UK university has been sentenced to five years in prison for raping a 12-year-old girl he met on the Internet.
LISTEN/DOWNLOAD: Jeff Akoh – Lokoja [ALBUM]
Networking platform releases nominees for the Woman Of The Year award 2017
Why Zimbabwe has a ‘Minister of WhatsApp’
‘Let me buy fake Gucci with fake money to beautify my fake life’ – Hushpuppi mocks his former friends and haters
Tizeti partners Facebook to bring Nigerians affordable internet service The Express Wi-fi plans are affordable and range from N50 for 100MB to N2,000 for 10GB.
Slaven Bilic: West Ham sack manager with team in the relegation zone
Facebook is shopping for a new ad agency to help tout innovation amid the ongoing Russia fiasco (FB)
AC Milan end two decade romance with Adidas
US president jumps over China’s ‘Great Firewall’ with first tweet
David Moyes West Ham appoint former Everton boss as new manager
‘When I got into the industry and found fame, I became irresponsible’ – Actress, Toyin Abraham
Drogba May Replace Emenalo as Chelsea’s Sporting Director
Post Malone -I Fall Apart
Tottenham’s Dembele eyes start against Arsenal
In Poland Pole dies after setting himself on fire in protest Passers-by tried to put out the flames with fire extinguishers, but the man was rushed to hospital in a serious condition
Everton sacks manager Ronald Koeman following poor start to Premier League season
LIB Exclusive: One year after, all is not well between Iyanya and Don Jazzy’s Mavin records
Barcelona wants to stay in La Liga amidst independence crisis – Club President
Buhari Ex-militants praise president for prompt payment of tuition fees
Share
Facebook
Twitter
WhatsApp
Pinterest
Linkedin
ReddIt
Email
Print
Tumblr
Telegram
Mix
VK
Digg
LINE
Viber
Naver