LIB Exclusive: One year after, all is not well between Iyanya and Don Jazzy’s Mavin records 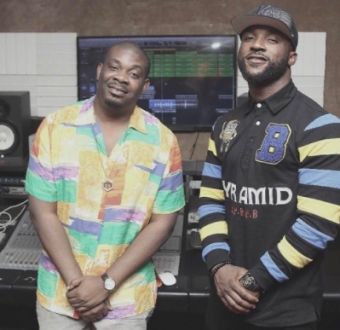 LIB Exclusive: One year after, all is not well between Iyanya and Don Jazzy’s Mavin records

As you read this, all is not well between Iyanya and Don Jazzy’s Mavin records. Its barely One year after he was unveiled as a Mavin record artiste but the last few months has seen the realtionship between both parties deteriorate terribly and its not getting better.

Iyanya’s relationship with Mavin was confirmed by Don Jazzy on October 31, 2016 via an Instagram post that reads “SMD is pleased to welcome @Iyanya to the Mavin Family. Pls join us to welcome him & let the world known that we #Up2Sumting. #MavinActivated”

One year after there are visible cracks in the relationship between them and according to reliable inside sources ‘they are both fed up with the arrangement’.

For starters, Iyanya who is also signed with Temple Company was treated to a soiree by close friends when he clocked 31 on Tuesday, October 31. The close-knitted event held at Crust and Cream, Victoria Island and noticeably, Mavin Records and its representatives were missing in the gathering.

That’s not all, his birthday went unnoticed by the label as its their custom via social media. A quick look at Mavin Records official social media platforms did not show any recognition of the singer’s birthday apart from a late post from Don Jazzy.

Another inside source tells LIB that ‘The record label has not had a particularly great year. Most of the Mavin output has been poor apart from perhaps Tiwa Savage, Reekado and Johnny Drille’.

Efforts to get comments from both camps at the time of this report didn’t yield results.