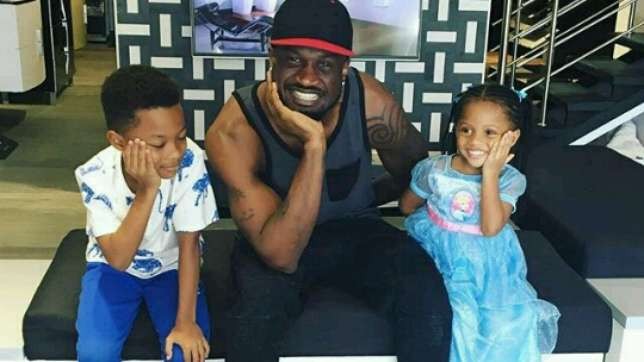 We take a look at some cute photos of some celebrity dads with their kids.

One of the cutest things to see is a celebrity daddy with his kids. There aren’t much things that would make you smile more in this world.

Well, you guys are in luck because we are about to give you five doses of cuteness.

The pictures below are of Nigerian celebrities with their offsprings. Get ready to see 40 shaded of cuteness below;

play Timaya with his daughters, Grace and Emma

Let’s just say when the photo of Timaya and his beautiful children broke on the Internet, it came as a surprise to many as the singer had never done it before. Timaya released a photo of him taking his kids to school and trust it was really cute. Timaya has two daughters, Grace and Emma with his baby mama, Barbara.

play Paul Okoye and his kids

Paul Okoye of the group Psquare is one celebrity on this list who loves to show off his cute kids. On his social media page, you can never go past his pictures without coming across pictures of his kids. He recently welcomed a set of twins with his wife, Anita. The amazing father of three adorable children has a number of cute photos with his kids and it’s obvious he is a proud dad.

ALSO READ: 10 celebrities who had kids before marriage

play Peter Okoye and his kids

Just like his twin brother, Paul, Peter has some really cute photo of his kids. The father of two beautiful children is also never shy to post photos of his son and daughter. His son even got signed to the youth team of Barcelona FC, an achievement Peter was proud of big time.

play Davido and Daughter, Imade at the 30 Billion Concert

Davido is the youngest of the amazing fathers on this list as he is a proud father of two adorable daughters, Imade and Hailey. Davido’s love for his daughter knows no bounds as he posts pictures of them on his Instagram and Snapchat pages every time. He even brought Imade upstage during his last #30BillionConcert held in Lagos. Major cuteness alert.

Timi Dakolo is a typical example of a doting father. He is one father whose love for his kids are so obvious and real. Timi Dakolo is a father of three beautiful children with an amazing and beautiful wife, Busola. On his social media pages, especially Instagram, he has a huge number of photos of himself and his kids. Let’s just say this guy can win “The Father and Kids Photo of The Year” award

Ryan Giggs: Manchester United legend set to be named Wales manager
Wizkid vs Davido 5 things you need to properly enjoy the beef between Starboy and OBO
Wizkid, Davido Pop stars reportedly clash in Dubai as beef deepens
‘The biggest duo ever in Africa’ Peter Okoye celebrates himself and his twin brother, Paul, as they turn a year older today
EFCC Agency arraigns ex-Nasarawa governor’s son over alleged N92m fraud
Photos of children of famous Hollywood stars as they walk the Dolce &amp; Gabbana runway
Jennifer Lawrence Talks to Oprah Winfrey About Dealing With Abuse on Set and Reclaiming Her Sexual Freedom
Barack Obama sends warm birthday message to his wife Michelle
In Syria Regime bombing kills 19 civilians near Damascus: monitor
Fans divided over Peter Okoye’s solo career
Do Me, I Do You ‘I don’t believe in forgiveness; I pay evil with evil’- Abia native doctor [Video]
7 New Year’s resolution we never keep
I did it out of love and care” – Mother put her ‘naughty’ seven-year-old daughter in chains to protect her
Pretty female teacher, 30, arrested for ‘having oral sex with student, 17, in her classroom, car and his home for 2years’ (Photos)
‘Atleast I f**ked for iPhone 6 not indomie – Young Nigerian girl brags on Facebook
‘I prevented the terrorists from bombing a church on Christmas Eve’ – Mama Boko Haram reveals
5 Nigerian media personalities who could run for President
Photos: President Buhari meets with Saraki and Dogara over the security situation in Benue state
When my father was sick, Bianca chose not to take care of him, rather she pleased herself’ – Ojukwu’s first son, Emeka Jnr speaks

Photos: Stunning Nigerian model leaves nothing to the imagination in a completely see-through bodysuit