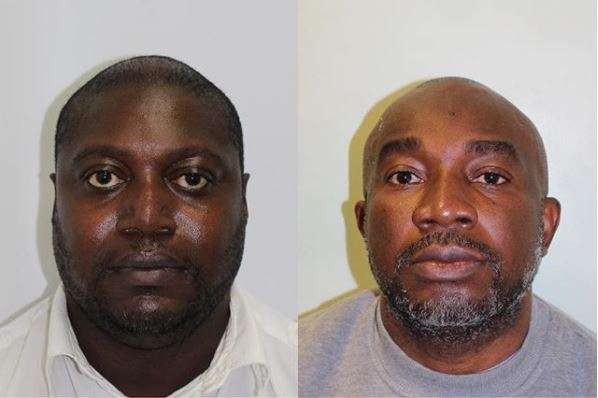 Two Nigerian men, Okwudili Chinze, 44 and Ahmed Otun, 41, have been jailed for mandate fraud in the United Kingdom.

Chinze and Otun were part of an organized network of fraudsters who scammed people and amateur clubs. The two men were able to make a sum of  £300,000 before being caught by the law.

On Friday, 17 November at Kingston Crown Court,  Okwudili Chinze was sentenced to two years and eight months for conspiracy to commit fraud. He will also serve another 15 months for money laundering. Both sentences will run concurrently.

His accomplice Ahmed Otun, received a sentence of four years for conspiracy to commit fraud and 22 months for money laundering. He will serve both sentences concurrently.

Apart from individuals and small clubs, Otun and Chinze also defrauded village halls and solicitor firms. The two Nigerians would send e-mails to organizations posing as the financial director or treasurer.

They would ask their victims to send a sum of money to them. The recipient would send the money to their accounts thinking that they are genuine.

“I would urge people to be very careful when moving and transferring money. Many of the victims linked to this case were tricked into sending money to criminals’ accounts after they were sent a spoof email with change of payment details.

“Always verify changes to financial arrangements with the organisation or person directly on the phone, or go via the company’s main switchboard to check if an email is genuine. Never reveal bank account details via email or on unsecure networks.

“Trust your instincts and always check before transferring money, because it will be extremely difficult to recover once you’ve sent it,” said  Acting Detective Sergeant Matt Wigg of FALCON, the fraud unit of  The Metropolitan Police Service in London.

2 men arrested for murder of 26 Nigerian girls, women killed in In Italy sea
Donald Trump US President tells Paris, Berlin to ‘keep making money’ via trade with Tehran US President Donald Trump said in an interview aired Sunday he does not object to France and Germany continuing trade with Iran, despite his refusal to certify the Iran nuclear deal.
Olympic weightlifter sells his gold medal to raise money for Iran earthquake victims
Financial Tips Money lessons from 5 male celebrities Asides their rich lifestyle, some of these male celebrities have very frugal money tips they use in their every day lives. And we can take two or more lessons from them.
7 AMAZING tips on how to stop losing money
Watch this runs-girl celebrating N100K pay off with nude video
DR Congo’s Kavumu child rape trial opens
FG protests against burial of 26 Nigerian girls, women Italy
‘My mother encouraged to travel to Abidjan for prostitution
AC Milan end two decade romance with Adidas
29 Latest Online Money Making Opportunities In Nigeria (2017)
Relationship Talk I like porn &amp; masturbation; is that why guys aren’t interested in me? I really need help on how to stop doing that so as to get the man of my dreams.
Everton in hot pursuit for Onyekuru
Social media What happens to a user’s account when he dies? The owners of the social media platforms have found ways to take care of such inevitable occurrence which users ought to be aware of.
In Japan ‘Black Widow’ to hang for murder A one-time millionairess dubbed the “Black Widow”, who tricked elderly lovers into drinking cyanide and then pocketed millions in insurance payouts and inheritance, was sentenced to death in Japan on Tuesday.
Jill Scott ends 1-yr marriage with husband
Exclusive Report: An Ordinary Student From Nigeria Earns $200 A Day While Staying At Home
Three students in Egypt stab a Nigerian man to death
An alleged runs girl’s show of shame There are some things you should not just put out on social media.
Share
Facebook
Twitter
WhatsApp
Pinterest
Linkedin
ReddIt
Email
Print
Tumblr
Telegram
Mix
VK
Digg
LINE
Viber
Naver