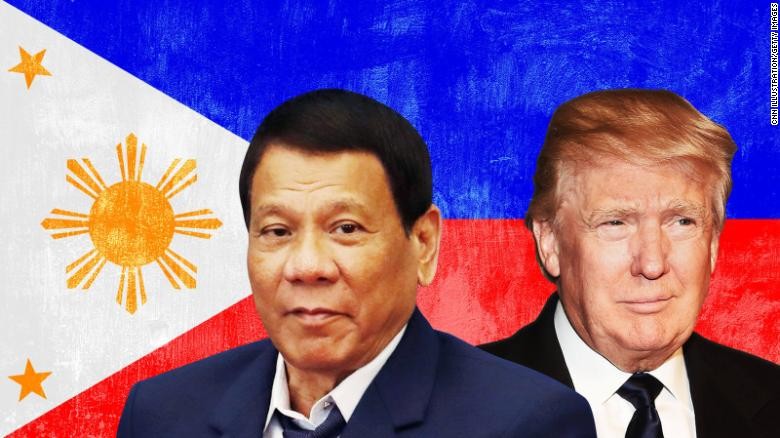 President Donald Trump and Philippine President Rodrigo Duterte, who lavished pleasantries on each other during public appearances in Manila Monday, “briefly” discussed human rights and the Philippine’s bloody war on drugs during their closed-door conversation, the White House said.

But a spokesman for the controversial Philippine President told reporters that “human rights did not arise” during the meeting.
Trump has largely eschewed public talk of human rights issues on his trip through Asia, despite the United States harboring long-held grievances with how countries in the region have treated their citizens. In Manila, the two leaders ignored shouted questions from reporters on the issue.
“The conversation focused on ISIS, illegal drugs and trade. Human rights briefly came up in the context of the Philippines’ fight against illegal drugs,” White House press secretary Sarah Sanders said. 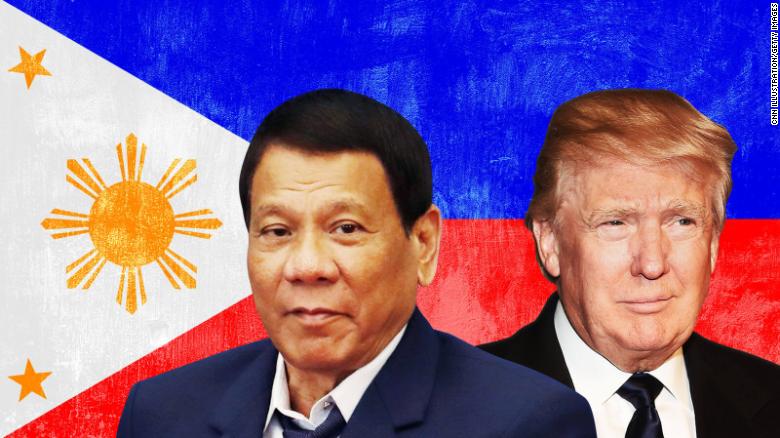 Trump seeks to strike diplomatic balance with Philippines’ Duterte
Duterte’s spokesman Harry Roque told CNN, however, that the topic “was not brought up,” adding that Duterte brought up the “drug menace” in the Philippines and that Trump “appeared sympathetic and did not have any official position on the matter but was merely nodding his head.”
White House officials did not respond when asked for clarity on what was discussed during the 40-minute during the meeting.
When reporters began shouting questions during a photo spray at the beginning of the meeting, Duterte said: “We are not answering, this is not a press statement … We are in a bilateral meeting.”
“We will be discussing matters that are of interest to both the Philippines and (the US) … with you around, guys, you are the spies,” Duterte joked, eliciting laughter from Trump.
Duterte, as part of an effort to rid the Philippines of drug users, has publicly cheered on and inspired thousands of extrajudicial killings during his time in office, drawing scorn from human rights organizations. The Philippine President has embraced his image as a tough-on-crime leader, even bragging that he personally killed someone when he was younger.
Trump’s public remarks in Manila, however, focused far more on the pomp and circumstance bestowed on him during his 5-country, 13-day trip through Asia.
“It’s a red carpet like nobody, I think, has probably ever seen,” Trump said, standing alongside the Australian and Japanese prime ministers. “And that really is a sign of respect, perhaps for me a little bit, but really, for our country.”
Though he has yet to make any major news on the trade front — a key policy focus of his trip — Trump teased he would make an announcement in a White House statement scheduled for Wednesday. 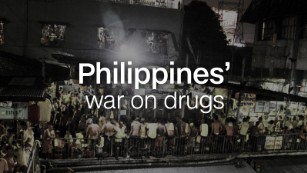 Philippines’ War on Drugs
Trump and Duterte spoke multiple times throughout the two-day ASEAN summit, including sharing a toast on Sunday night that was the front page of newspapers in Manila. Some 1,500 to 2,000 demonstrators also hit the streets on Monday, speaking out against Trump’s visit, according to a police estimate shared with CNN, many of whom appeared to be from the far-left.
While the two spoke fondly of one another in public, Sanders noted Trump did raise human rights concerns in private, regarding Duterte’s war on drugs.
Duterte’s controversial “drug war” — which has killed anywhere at least 6,000 people, according to police estimates — has drawn international scorn and was expected to test Trump’s penchant for diplomatic flattery.
The primary reason for concern among human rights organizations is that Duterte has fully embraced Trump’s style, and Philippine officials, possibly in an attempt to woo the President, have said that the two leaders have a great deal in common.
Roque told CNN before the visit that he sees Trump and Duterte as “very much alike in their thinking, their language and demeanor.”
Phelim Kine, deputy director of Human Rights Watch’s Asia division and an expert on Duterte’s extrajudicial campaign, told CNN that the incongruity helps is a win for the Philippine leaders, allowing his officials to spin the meeting as validation.
“That gives Duterte’s craven spin-doctors wide latitude to deny that criticism even occurred,” Kine said.
“What is unquestionable here is that the US President has passed on a golden opportunity to publicly show solidarity with the Philippine people by expressing concern about those thousands of deaths and to reproach Duterte’s utter trashing of the concept of rule of law,” he added. 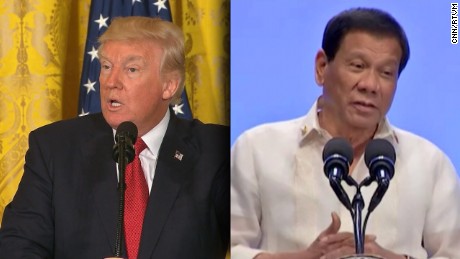 Trump shows solidarity with Duterte 02:11
Trump had previously praised Duterte’s crackdowns.
“I just wanted to congratulate you because I am hearing of the unbelievable job on the drug problem,” Trump told the Philippine President in their first call earlier this year, according to a leaked transcript obtained by The Washington Post.
Trump did not raise human rights issues in the call. But a senior Trump administration official later tried to walk back Trump’s comment, saying he wasn’t condoning violence and human rights violations but was nodding to the United State’s drug issues.
Even as the drug crackdown has led to sweeping violence and discord in the Philippines, Duterte has embraced his image, including by recently bragging that he has personally killed people.
“When I was a teenager, I was in and out of jail. One fight there, another here,” he said this week in Vietnam ahead of the recent Asia-Pacific Economic Cooperation (APEC) meeting. “At the age of 16, I killed someone.”
A spokesman for the Philippine President said later that he thought the comment “was in jest.”
Leaders in the Philippines view Trump’s visit, though, as a step forward in US-Philippine relations because former President Barack Obama’s relationship with Duterte at the end of his presidency was tense and frayed.
Duterte made slamming Obama a key aspect of his interactions with the United States, including calling the former president a “son of a bitch” and stating that he could “go to hell.”
Days before Trump’s visit, Duterte reportedly even told an audience in Vietnam that that Obama was “so black” and “arrogant.”
https://wowplus.net/trump-seething-mueller-probe-reaches-former-aides/
https://wowplus.net/us-president-decide-north-korea-terror-list-asia-trip/
https://wowplus.net/pence-us-vp-says-1983-bombing-opening-salvo-war-terror-us-vice-president-mike-pence-described-1983-bombing-marine-corps-barracks-beirut-opening-shots-war-terr/
https://wowplus.net/photos-wedding-oluwatosin-daughter-nigerias-senate-president-bukola-saraki/
https://wowplus.net/india-rounds-beggars-ahead-ivanka-trumps-visit/
Share
Facebook
Twitter
WhatsApp
Pinterest
Linkedin
ReddIt
Email
Print
Tumblr
Telegram
Mix
VK
Digg
LINE
Viber
Naver
Previous articleProud mom Nadia Buari shares adorable new photos of her twin daughters (Photos) Proud mom Nadia Buari shares adorable new photos of her twin daughters (Photos)
Next articleUS puts on 3-carrier show of force for first time in decade