Wowplus
Home World News ” Talks of a second term bid at this time when people... 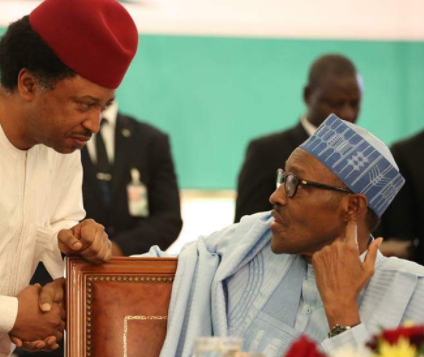 Senator Shehu Sani has asked President Buhari to bury his thoughts to seek a second term in office and concentrate his energy in fixing all the problems like Herdsmen killings, kidnappings and other problems that currently plague his administration.

Sani, in a statement released to the media, said this while reacting to the endorsement of President Buhari’s second term bid by seven APC governors. Sani in his statement said it amounts to political sacrilage for anyone to be talking about a second term bid for president Buhari when people are being killed. The Senator who represents Kaduna central in the senate, says such discussions of re-election amounts to dancing on the graves of the deceased.

“It is wrong to be talking of the re-election of Buhari as President when hundreds of lives are being lost and people are being massacred in different parts of the country. In time of bloodshed like this, the issue should be how to come together and address the problem. But those marketing the President at a time of this bloodshed are like people dancing on the graves of Nigerians. Campaigning for Buhari for next year’s election when people are being killed, when orphans and widows are being produced as a result of the tragedy of these circumstances and people are being kidnapped, I think amounts to political sacrilege. It is an insult on the conscience of Nigerians and it is an insult on the moral integrity of Nigerians for anybody to ignore what is happening and simply walk to the President and tell him that what is important at this material time is his re-election campaign for next year’s election.”

On the Fulani herdsmen attack in Benue state, Sani called for everyone to come together to stop it so it does not tear the nation apart

“If we allow this trend to continue, it would threaten the peace and unity of this country. I advise people advising the President and strategising for him to contest the elections to spare him some time, advise him well and provide a solid strategy to end the carnage and atrocities that is going on in the country today. Human life is more important than politics, because you cannot preside over dead people. The images we see in both social and traditional media is heart-rending and despicable. I can tell you that over a year ago, the President was in Zamfara State in military fatigue to address the problem of banditry and mass killing. The President should be seen in any part of the country where such violence occurs. The President must visit Southern Kaduna, Birnin Gwari, Taraba, Benue, Rivers and Adamawa states. It gives people some hope that their Commander-in-Chief is determined and committed to defend and protect them.”

First photos from the traditional wedding of Ondo state governor, Rotimi Akeredolu’s son, Babajide
‘Dear President Buhari, It is shameful that those like me who supported you have become butts of jokes everywhere we go’ – Dele Momodu writes
How to Manage Slump Months When Your Income Fluctuates
Cardi B mocks people sharing her nude videos online…
‘Mark my words, money will fail in 2019 elections’ – Fela Durotoye
Fr. Mbaka and the Voice of God by Reuben Abati
Sextape of Cardi B’s fiance Offset with another female leaks on Twitter
Exclusive Photos: Dbanj becomes a chief in Imo state
Olamide Dear conflicted fan, it’s okay not to like “Lagos Nawa” album
Aisha Buhari First lady praises health minister, doctors over son’s well-being
Yusuf Buhari President’s son reportedly in critical condition, could be flown to Germany
Lol..See the frightful statue of former Chelsea star Micheal Essien that was unveiled in Ghana (Photos)
US carriers in rare Pacific op amid North Korea tensions
’20 things you shouldn’t do in 2018′ – By Debola Williams
Donald Trump President says US could ‘conceivably’ return to Paris climate deal
Competency test: Senator Shehu Sani commends Kaduna state teachers for embarking on an indefinite strike
Osinbajo Those politicising recent killings must be stopped – Vice President
Buhari 7 things we learnt from president’s New Year address