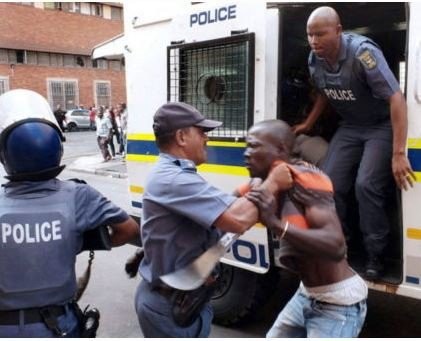 The Nigerian community in South Africa has alleged that a 27-year old man, Ebuka Okori, was killed by the police in Durban in the early hours of Friday 19th January, 2018.

According to Mr Bartholomew Eziagulu, the Chairman of the Nigerian Union chapter in Kwazulu Natal Province of South Africa, the victim was a native of Umunze in Orumba North Local Government of Anambra.

He said that an eyewitness informed the union that two police officers in mufti forcefully gained access to the victim`s house at Campbell Street in Durban at 2.am on Friday.

According to him, the officers immediately demanded money from Okori.

“When he refused, he was handcuffed, taken outside and shot dead. The officers took away his cell phone, e-passport and other valuable documents. The relative of the victim was tortured and robbed of his belongings while a third victim, a South African, was also robbed,” he said.

Eziagulu said that the Okori`s brother escaped from the house and called for help.

“The Metro Police around the vicinity swiftly intervened and picked the vehicle number of the assailants,” he added.

Eziagulu said that police detectives and another special police team which investigates complaints against their colleagues had been assisting to arrest the culprits.

Cache of jewels reported stolen from Paris’ Ritz may have been found — at the scene
Photo: Nigerian men arrested for illegally staying in Indonesia
Liverpool’s Mane suffers injury scare on Senegal duty
ANC: Zuma pleads for unity as party picks new leader
VP Osinbajo takes selfie with market women and children at Ikenne
Founder of world famous Gay dating site, Henry Badenhorst dies in South Africa
Photo: House fire claims lives of father, mother and their three children in Jos, Plateau State
Cardi B dumps boyfriend Offset after video of him and South African Queen Twerk surfaces
“Pray for us that are suffering in Sambisa forest” Soldier pleads with Nigerians
Nigeria Can Lift 2018 World Cup, says CAF President
Nelson Mandela funeral: ‘Millions misspent’
Father of eight who raped his 10-year-old daughter sentenced to 18 years in jail, 10 strokes of cane
Sharon Ojong shares tips on How to be a Professional Model on a New Episode of “The SO Series”
African Boxing Union Lightweight Title Joe Boy threatens to box Egyptian champion to a pulp
United Airlines Officers fired following probe of passenger removal The city of Chicago revealed Tuesday that it fired two airport police officers in connection with the controversial removal of a passenger from a United Airlines plane earlier this year.
Gunmen kill two police officers, abduct an American and a Canadian in Kaduna
Sydney man charged with being ‘economic agent’ for North Korea
Photo: Man arrested for trying to rape his three-year-old niece