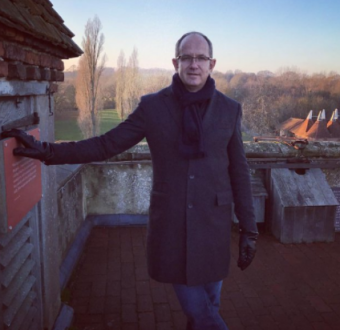 Henry Badenhorst, the founder of the popular gay dating site, Gaydar has died in South Africa at the age of 51, after falling from a tower block on Saturday.

His death comes a decade after his co-founder and former partner Gary Frisch fell to his death in London.

The two created Gaydar, which became the world’s largest dating site for gay and bisexual men in 1999, when a friend said he was too busy to find a partner.

The exact details surrounding Badenhorst’s death remain unclear but his legacy, both on and offline, within the LGBT community and outside it will forever remain indelible.

Army sets up board to probe shooting, death of officers at Chibok
“Game of Thrones” Watch every death on GOT in fan-made compilation Every 174,373 death scene on “Game of Thrones” has been compiled by a fan of the show.
Quadri vows to revenge in ETTU Champions League
Nigerian Basketballer dies in the USA
AY Makun Comedian featured on CNN Marketplace Africa, talks hardships in Nollywood When asked about the impact of the recession in the country’s economy on business, AY noted that even his company suffered as did most companies in the industry.
Cardi B dumps boyfriend Offset after video of him and South African Queen Twerk surfaces
LISTEN/DOWNLOAD: Jeff Akoh – Lokoja [ALBUM]
Ghanaian gay man Bobrisky attacks Nigerian Male-Barbie
Nasty C – Allow ft. French Montana (@Nasty_CSA)
Trump On a divided peninsula, South Koreans split over US President On the divided Korean peninsula, Seoul has seen protests both for and against President Donald Trump, with Southerners split over his aggressive handling of Pyongyang’s provocations.
At least 650 people die in daily road accidents across Africa – United Nations
Liverpool’s Mane suffers injury scare on Senegal duty
In Niger Raid highlights US forces’ growing Africa role The killing of four American special operations soldiers in Niger has highlighted the increasing role elite units are playing across Africa, which is rapidly becoming a major center of US military action.
Mad Love Bayelsa police arrest man for butchering his wife A 24-year-old man has been arrested by the police in Bayelsa State for butchering his wife to death on suspicion of cheating.
This is how to actually file for divorce
Music star reportedly in a secret relationship with Bella Hadid
We really love each other but our parents are being difficult
16yr old girl remanded in prison for stabbing 20yr old lover to death
Stop disturbing your partner