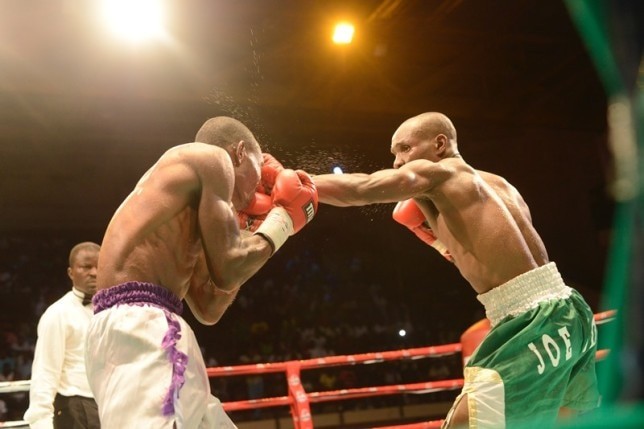 Joe Boy has promised to beat Egyptian top boxer, Abdulrahim Ahmed to a pulp on boxing day in Nigeria.

The millionaire boxer, who is billed to fight Ahmed for the vacant African Boxing Union (ABU) lightweight title, has vowed to demolish his opponent when they clash at GOtv Boxing Night 13 on December 26, 2017 at the Landmark Event Centre, Victoria Island, Lagos.

“I know he is his country’s champion and also holds the Mediterranean title, but I will beat him to pulp. In the Bible, Joseph became big in Egypt. In Lagos, I will become big by winning the ABU title. I will do Nigeria proud. The Egyptian you will see that day, you will see no more after,” Joe Boy said.

play Joe boy being presented with the trophy and cheque

In the last nine months, Joe Boy had fought and won more bouts than his peers in Nigeria. The fast rising boxer has also earned himself popularity amongst boxing lovers as well as fortune winning over 4 million Naira at over 3 fights organised by Jenkins Alumona owned Flykite Promotions for GoTV.

Joe Boy was challenged by South African boxer Dillon Yule for a showdown on October 1, 2017 to contest the Commonwealth Africa lightweight title but the fight couldn’t hold as a result of an injury sustained by Yule.