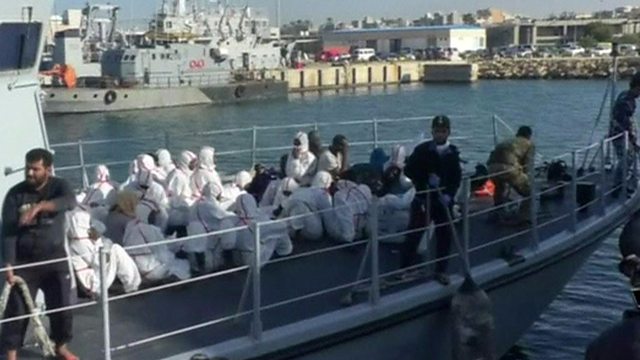 At least 31 migrants have died after their boat capsized off the coast of Libya on Saturday.

They had been trying to cross the Mediterranean along with another boat. Children were among the dead.

Some 60 people were rescued from the water and 140 picked up from the second boat.

Mild weather conditions and calm seas has led to a rise in the number of migrants leaving Libya for Europe in recent days.

Some 250 people were rescued by the Libyan coastguard on Thursday.

And Italy’s coastguard said on Tuesday it had rescued 1,100 people.

Saturday’s sinking happened off the shores of Garabulli, a town some 37 miles (60 km) east of the Libyan capital, Tripoli.

“The first dinghy had capsized, it had sunk before we reached it,” Colonel Abu Ajala Abdelbari of Libya’s coastguard said.

He said the coastguard had gone to the scene “after hearing distress signals, and when they got there they found a group of people hanging on to the remainder of the dinghy, but the rest had died, they had spread out while the dinghy was sinking.”

They have been taken taken to Tripoli’s naval base.

Other rescue operations were ongoing on Saturday evening, an Italian coastguard told the AFP news agency.

“The weather conditions these days are favourable for sending migrants to European shores on boats that are often unseaworthy,” Colonel Abu Ajala Abdelbari said.

The International Organization for Migration (IOM) said on Friday that at least 33,000 people are reported to have died or gone missing between 2000 and 2017 – making crossing the Mediterranean the world’s “deadliest journey” for migrants.

Nearly 3,000 migrants are believed to have drowned while trying to cross the Mediterranean this year.

I Used to Take Marijuana, Codeine and Hard Drugs – Popular Nollywood Actress, Toyin Abraham
2 men arrested for murder of 26 Nigerian girls, women killed in In Italy sea
Photos: Two-year-old Nigerian boy, four others drown in the Mediterranean Sea due to reckless behavior of Libyan Coast Guards
Italy probes deaths of 26 Nigerian women from migrant boats
‘Where is the world?’: Libya responds to outrage over slave auctions
Wizkid vs Davido 5 things you need to properly enjoy the beef between Starboy and OBO
Nigerian Migrants FG confirms death of 26 in the Mediterranean
Goodluck Jonathan I’m always close to tears when Nigerians say they want me back – ex-President
Paul Pogba dedicates goal to migrants sold as slaves in Libya
Khloe Kardashian Is Behind Your Favorite Kris Kardashian Meme
Rwanda offers refuge to enslaved Libya migrants
How to lead Nigerians out of poverty, by Tinubu
In Libya Migrants sold into slavery tell of ‘total hell’
Babatunde Fashola ‘We’re re-introducing toll gates across the country,’ Minister says
‘Catalonia Is Spain!’ Crowd chants at Barcelona rally That was a reference to the decision by Catalonia’s two biggest banks to move their legal headquarters to other parts of Spain in recent weeks due to the political tension.
In Vietnam Death toll from typhoon rises to 61 The death toll from typhoon downpours and floods wreaking havoc along Vietnam’s south-central coast has risen to 61, an official said Tuesday, as the country opens its doors to world leaders for this week’s APEC summit.
We’ll facilitate Joshua’s visit to Nigeria – Ogun govt
‘When I got into the industry and found fame, I became irresponsible’ – Actress, Toyin Abraham
Dear Uriel, I love your ‘booby’ – Ruggedman