Photos: Two-year-old Nigerian boy, four others drown in the Mediterranean Sea due to reckless behavior of Libyan Coast Guards 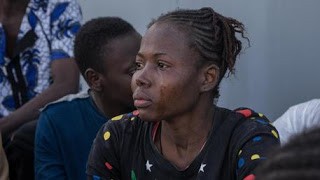 The child’s 26-year-old mother woman (pictured) was saved from drowning but he died before her eyes. 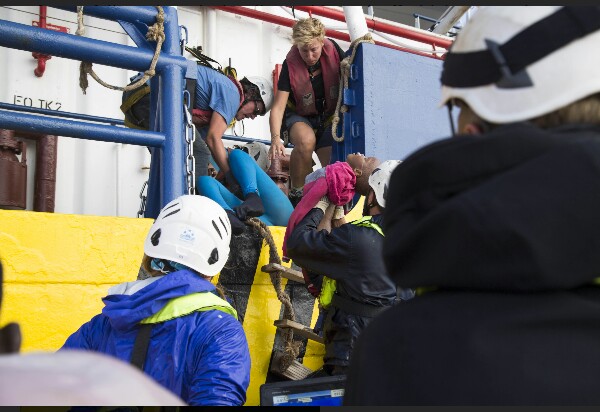 According to the Sea-Watch, a German Non-profit organization, that conducted the rescue operation,  the tragic incident was caused by the violent and reckless behavior of Libyan Coast Guards.

“At approx. 7 am, the crew aboard Sea-Watch 3 received a call of Rome MRCC. North of Tripoli a sinking inflatable boat in international waters had sent a distress call. The Sea-Watch 3 crew arrived on location at about the same time as a Libyan Coast Guard patrol boat and started boarding of people in distress,” the statement reads.

The Libyan Coast Guard approached the boat as well and took over people from aboard the boat, however beating and threatening them. Onboard panic started and a numerous refugees fell overboard. The Libyan ship took off with inappropriate speed while people were still latching onto the side, being dragged by their vessel.

After Sea-Watch had already repeadtedly alarmed the Libyans about their life-threatening practice, an Italian Navy helicopter had to intervene, briefly stopping the Libyan ship, to prevent further deadly maneuvering. At least 5 people were killed in the boat’s sinking, among them a child whom the medical crew onboard Sea-Watch 3 was not able to reanimate.

“Probably, nobody would have had to die today if only we had the possibility to operate reasonably in a calm environment. Instead of coordinating the rescue operation with the vessels present such as a ship of the French Navy, the Libyans tried to take as many people as possible back to Libya – and accepted the loss of several lives”, says head of mission Johannes Bayer.

“These deaths have to be blamed on the Libyan Coast Guards who have obstructed a safe rescue with their brutal behavior. The responsability is on the side of the European Union, however, who trains and finances these militias. They act in the EU’s will. The European governments finally have to draw conclusions from this incident and stop the collaboration with the Libyan Coast Guards. The EU has to stop to rate migration control higher than human rights!” 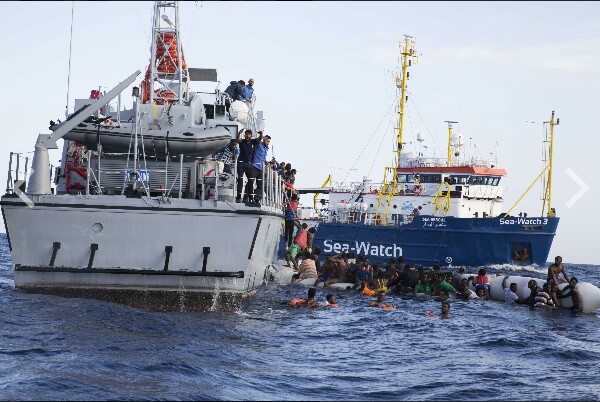 Libyan Coast Guards have clearly breached international law by bringing an unknown number of people onboard their vessel, probably with the goal to take them back to Libya.

“We were at high seas, outside of libyan territorial waters, about 30 nm north of Tripoli – even outside of the consecutive zone. There, the Libyans have no sovereign rights whatsoever”, says Sea-Watch captain Pia Klemp.

Big Black Woman poses in skimpy lingerie for her 35th birthday and social media users go hard on her
In Somalia The deadliest attacks in country since 2010 A weekend attack claimed by the Al-Qaeda aligned Shabaab on a hotel in Mogadishu has killed at least 27 people, just two weeks after the deadliest attack in Somalia’s history killed 358 people in the capital.
At least 650 people die in daily road accidents across Africa – United Nations
Tizeti partners Facebook to bring Nigerians affordable internet service The Express Wi-fi plans are affordable and range from N50 for 100MB to N2,000 for 10GB.
Torrential rain who killed five people dead Four of the fatalities were young miners working in a pit that filled with water and the fifth a teenage girl who fell off a ravine.
AY Makun Comedian featured on CNN Marketplace Africa, talks hardships in Nollywood When asked about the impact of the recession in the country’s economy on business, AY noted that even his company suffered as did most companies in the industry.
Hope for noma disease victims left without faces
At least 20 people shot as gunman opens fires during church service n Texas
20-year-old apprentice allegedly shot dead, four others injured in Lagos during raid by soldiers attached to Exercise Crocodile Smile II
Ladies spark outrage after dressing up as nuns in bikinis (photos)
IS GOD THE AUTHOR OF CONFUSION? @thewinlos
Kenya Country waits for an end to presidential re-run Kenya’s election board is expected Monday to decide whether to reschedule a vote in flashpoint opposition areas or to push ahead with declaring victory for President Uhuru Kenyatta.
Samsung Galaxy J7 smartphone reportedly blows up in mid-air flight The story is going by a possible theory that the user of that Samsung phone may have caused the incident.
Khloe Kardashian Is Behind Your Favorite Kris Kardashian Meme
‘Stop encouraging laziness, your generosity toward a lazy person doesn’t count as charity’ – Alibaba writes
Dear Uriel, I love your ‘booby’ – Ruggedman
In Australia Lost diver swam miles to shore stalked by shark A diver separated from his boat off the coast of Australia said Sunday he was lucky to be alive after being forced to swim miles back to shore — shadowed by a large tiger shark.
In Vietnam Death toll from typhoon rises to 61 The death toll from typhoon downpours and floods wreaking havoc along Vietnam’s south-central coast has risen to 61, an official said Tuesday, as the country opens its doors to world leaders for this week’s APEC summit.
Share
Facebook
Twitter
WhatsApp
Pinterest
Linkedin
ReddIt
Email
Print
Tumblr
Telegram
Mix
VK
Digg
LINE
Viber
Naver
Previous articleYemi Alade – Single & Searching (Official Video) ft. Falz
Next articleNigerian Young lady wearing only a thong and no bra twerks in viral new video……..18+