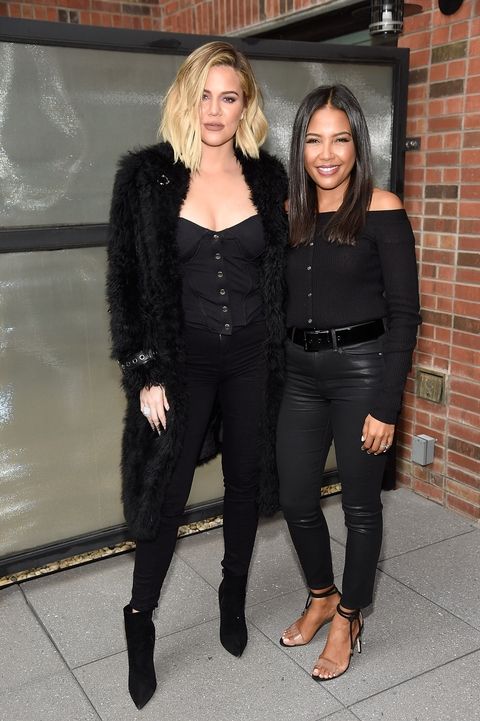 With just over a year of designing Good American under their belts, Khloe Kardashian and Emma Grede have solidified their places not only in the denim market, but also their reputations as women who truly champion size inclusivity in the fashion world. Yesterday in New York City, the duo brought a group of editors together for a Q&A hosted by Good American Squad member and model Leomie Anderson to discuss the journey of the brand, learning from mistakes, and how they spread the message of body positivity to the men in their lives. Read on for more highlights from the conversation.

Both Grede and Kardashian knew Good American would make an impact, but didn’t know how big it would be: “We knew there was such a need for the type of product we do, but definitely didn’t see the whole shift in the retail landscape,” shared Grede. “Nordstrom really credited Good American with their change in their entire retail strategy. They’ve gone out to every brand to ask them to do extended sizing and they’ve changed the way they merchandise they’ve changed their mannequins and that’s going to be rolled out across the country.” Added Kardashian,”Normally you don’t want competition, but in this aspect bring on some friendly competition. Bring in the inclusivity and sizing. Let’s have competition in that regards. I’m all for it.”

Khloe credits her family for her body confidence: “I never knew I wasn’t an ‘ideal weight’ growing up,” the youngest Kardashian sister shared. “My family never made me feel less than. My sister, my mom, my dad—we all looked different, but no one ever made me feel like I was chubby. I didn’t know that I was bigger or different from them, I guess, until we started doing our TV show. I was in the public eye and people were able to pick me a part. That’s when I was like, oh I guess I’m chubby or bigger than them. I really commend my mom and sisters for never making me feel less than [them]. Everyone always asks, ‘how do you so much confidence?” and I say “ I don’t know, I guess it’s the household I grew up in. I was allowed to wear the body-con Herve dresses that my sister wore. I didn’t feel like I was too big to wear them. I was like I look cute! I was all for it.”

Good American’s success comes from being more than just a product line: Said Grede, “I think people want brands that have a purpose. People need to feel that you’re more than just the some of your parts, more than just a pair of pants and I think people feel a lot of pride when they say I’m in Good American, I’m an empowered woman.” She adds, “People want to be surrounded by positivity and we are the ultimate positive woman brand. That is what we do. People smell bullshit. They know when it’s not real. And we were really walking the walk and talking the talk.”

Khloe is the mastermind behind the latest iconic Kris Kardashian meme: When Anderson mentioned she loved Kris’ new hair Khloe replied: Oh the blond? She was so drunk in London. I actually love her like that. I did get her drunk though.

The best piece of business advice Khloe can give: “You’re always going to hear no, so be prepared for that,” shared Kardashian. “If you’re not confident or secure enough in whatever your business is to hear no a million times, then you have believe in yourself. No one is going to just hand you anything. I hear no all the time. Nordstrom wasn’t giving us this place. We had to prove why we deserve to be on the floor with the rest of them. And we do.”

Why they believe retailers were hesitant to carry over a size 12: “People don’t believe they have the customer,” Grede shared. “That’s the number one thing we got. And I’d say to them, you do have the customer, she’s just buying handbags and shoes from you. It comes down to the fact that they just don’t know because they’ve never done it. Nordstrom was fantastic because they took such a gamble, but it’s obviously working out for them.”

On mistakes they made in the beginning and what they learned from them:“There’s so many things with fit,” Kardashian admitted. “Just because something fits on me or Emma or because we like something doesn’t mean the same silhouette will be taken in by the masses. I think it’s about really trying to take yourself out of it and thinking about designing something for a wide range of women.” Grede got even more candid. “We totally messed up sizing in the beginning,” she said. “We were all over and it was a grading issue we had in the beginning, and it was about a lack of expertise we had. We corrected really quickly, but it was a mistake.” According to the duo, the brand simply apologized as customer service is a priority. “We told people what happened and they just returned,” said Kardashian.”If you correct and take ownership of your mistakes people really appreciate that.”

How they teach body positivity messages to the men in their lives: Kardashian and Grede agree it starts from a young age. “We used to get our mouth washed out with soap if we ever identified someone like, oh that big girl over there,” Kardashi shaanred. “We were never allowed to identify someone with any physical attribute. I don’t know why my dad was super strict about that but it always played into me as an adult. I never really identify someone through physical attributes. It makes you remember people’s names and faces more and I really like that. And it’s just about how you treat people and starting from a young age.”

Visit Good American’s V-File pop up shop in New York City October 27 and 28, 2017, or shop the brand on nordstrom.com, at select Bloomingdales stores, and on goodamerican.com.