Trump On a divided peninsula, South Koreans split over US President On the divided Korean peninsula, Seoul has seen protests both for and against President Donald Trump, with Southerners split over his aggressive handling of Pyongyang’s provocations. 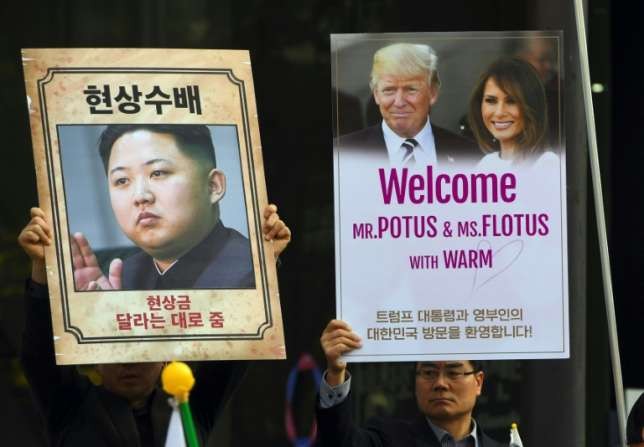 On the divided Korean peninsula, Seoul has seen protests both for and against President Donald Trump, with Southerners split over his aggressive handling of Pyongyang’s provocations.

South Koreans are known for their indifference to decades of nearly daily threats of attack from their impoverished but nuclear-armed neighbour.

Even, so the recent war of words between the outspoken US leader and the isolated North’s ruthless young ruler has shaken their usual stoicism.

The South Korean capital — a city of 10 million people — would be on the front line of any conflict, with one study projecting 65,000 civilian fatalities on the first day of just a conventional war.

But one pro-Trump banner on display in the city at the weekend proclaimed: “Mr Trump, we are not afraid to die. We want you to strike North Korea now.”

Pro-Trump protestors are mostly politically conservative and over 60.

For 35-year-old office worker Park Gene, such views are “crazy”.

“These elderly protestors may think they have only a few years to live anyway,” he told AFP. “But I have a whole life ahead of me and don’t want to die.”

Tens of thousands of US troops were among the millions who died during the 1950-53 Korean War.

The two countries have been in a security alliance ever since, with 28,500 US troops stationed in the country.

Their presence has deterred a Northern invasion for decades, and in a Korea Times opinion poll last week a clear majority of South Koreans — — 59.2 percent — named the US as the country they feel most favourably towards.

Almost half — 48.6 percent — blamed Kim for the rising tensions, rather than Trump.

But at the same time, a Social Trends Institute poll last month showed most South Koreans did not believe the US leader was a force for peace on the peninsula.

At the weekend, thousands of South Koreans demonstrated against “war maniac” Trump, waving banners reading “No Trump, No War”, while rival pro-US activists held an event a few blocks away.

On Monday, dozens of activists including senior retired officials convened across the road to hail the US leader.

Trump, who has warned of “fire and fury” against the North and mocked Kim as “Rocket Man”, said on Monday that the time for “strategic patience” with his regime was over.

But Seoul is only about 50 kilometres (30 miles) from the heavily fortified border, within range of the North’s massive artillery forces.

Irritation over Trump’s hostile rhetoric is higher among young South Koreans with no memories of the war, who often accuse their parents’ generation of “worshipping” the US as their country’s wartime saviour.

Office worker Park regards Trump as dangerous and unfit for the White House, but still values Seoul’s military alliance with Washington and does not want to see US troops withdraw, as some protestors demand.

“Trump is far, far from an ideal leader,” he said. “But I guess the US is an important ally for South Korea, regardless who is the president of that country.”