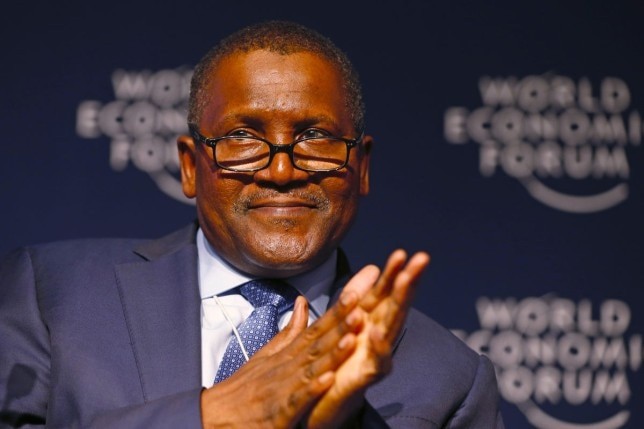 Aliko Dangote, Africa’s richest person, has been honored for his contribution to increasing local food production and lessen food imports in Nigeria.

Dangote was among the 50 most influential names honored by Bloomberg for their contribution to humanity at Bloomberg’s Annual Gala Dinner in New York.

According to Bloomberg, Dangote has been honoured for “his outstanding commitment of over 4 billion dollars to increase Nigeria’s food production capacity.

He was also commended for focusing on domestic production of sugar and dairy, with 500 million litres of local milk to be produced by 2019.

“What sets The Bloomberg 50 apart from other lists is that each person chosen has demonstrated measurable change over the past year,” Bloomberg Businessweek editor Megan Murphy, said.

New York Truck Crash Trump decries tragic incident in Manhattan
‘You should never have to choose between two good things, when both, together, make a perfect combination’ – BankyW shares wise words to the Okoye brothers
Robert Mueller Straight-shooting former FBI chief Robert Mueller, the former FBI director heading the probe into alleged collusion between the Trump election campaign and Russia, has earned a reputation of being a straight shooter who could be right out of Hollywood’s central casting.
Nicki Minaj puts on an eye-popping display in leather outfit for New York event (Photos)
Prominent Imam says he tried to warn New York mayor about terrorism in the city but was ignored
Five of the best American cars
African-American and Latina strippers in New York reportedly go on strike to demand for equal pay as bartenders
Kevin Spacey ‘House of Cards’ actor comes out as gay, apologizes after misconduct accusation Kevin Spacey came out as gay early Monday and apologized to actor Anthony Rapp, who accused the Hollywood star of making a sexual advance on him at a 1986 party.
Vegan Food That Have Aphrodisiac Effects
Pacers and Cavaliers set for battle
5 Ways to Eat Healthy Without Going Broke
Khloe Kardashian Is Behind Your Favorite Kris Kardashian Meme
‘House of Cards’ writers racing against the clock to rewrite show
Trump’s charitable foundation says it’s shutting down, but an ongoing investigation in New York may complicate that
In Kenya Second protester shot dead after fractious vote A second protester was killed in Kenya on Friday as anger raged a day after a divisive election boycotted by the opposition, taking the death toll from two days of protests to eight.
Rapper Cardi B covers the November 2017 ‘Hot Issue’ of Rolling Stone magazine
APGA clears remaining 4 LGAs in Anambra guber poll

Hameed Ali Customs boss says PDP members ‘hijacked’ Buhari’s government Ali said the APC government “cannot move forward” because 50 percent of those in the current administration are from the PDP.