Pacers and Cavaliers set for battle 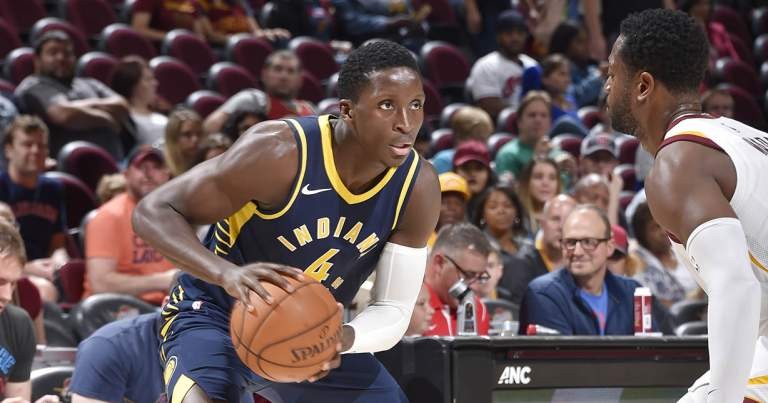 The NBA clash that will be aired live on Kwesé Sports 1 on Thursday morning, is a contest between two teams that, surprisingly, seem to be going in the same direction they were heading at the end of the last regular season. Indiana Pacers finished the strongly with a 5-0 run, and sneaked past the .500 mark with a 42-40 record; while the Cavaliers ended the season on an 0-4 run, before snapping out of the funk in time to play all the way to the NBA Finals. Indiana, now shorn of All-Star forward, Paul George, have started the season 4-3, while the Cavaliers, who added more firepower, are 3-4 over the first seven games.

The Pacers have taken-off with their new up-tempo offense under the leadership of Victor Oladipo. The former Indiana University star was a part of the trade that took Paul George to Oklahoma City, with Domantas Sabonis and Oladipo going in the opposite direction. When that trade was announced, it was called “the Paul George trade” and many believed Indiana were fleeced. Seven games in, a lot of Pacers fans are beginning to feel it is actually “The Victor Oladipo trade”, and the Oklahoma City Thunder got jacked! The Nigerian-American is averaging 25.5 points per game, but more than that, he provides leadership for the Pacers; something that was questioned in Paul George.

Then there is Domantas Sabonis, the second player in the trade for George. Sabonis is one of two players in Indiana averaging double-doubles: his point average is 13.1ppg and he is grabbing 10.2 boards per game. The other player in that category is Myles Turner, but his 21 points and 14 rebounds were recorded in a single game. Darren Collison on the other hand, has provided veteran leadership since he arrived from Sacramento in the summer. The eight-year veteran seems to have found a new level; the 33.2 minutes he is averaging are the most he is playing in three years, and the 14.3ppg average are the most since the 16.1ppg he averaged in 2014-15, while he was at Sacramento.

The Cleveland Cavaliers have attributed their slow start to the rule-change which has both limited the number of time-outs allowed in a game, and shortened the amount of time spent at these mid-game breaks. The ageing Cavs are playing far more minutes than they are used to, and it is affecting their production. The go-to man, however, remains LeBron James, despite the fact that the 24.6ppg average is his lowest scoring production since his rookie season (20.9ppg). James also leads the team in assists (8.6 assists per game) and blocks (career-tying 1.1 blocks per game).

Kevin Love replaced Tristan Thompson as the starting center for the Cavaliers at the start of the season and his scoring production, which went up after a two-year dip, is still going up. Love is averaging 19.1ppg and adding 11.1rpg – the only player averaging a double-double at Cavs.

Kyle Korver (10.4ppg) and Jeff Green (10.0ppg) are contributing off the bench, and Dwyane Wade has provided leadership when called upon, but the biggest revelation for the Cavaliers, has been former League MVP, Derrick Rose. The former Chicago Bulls guard has started three games, and is averaging 13.7ppg, that is not his best production by a mile, but he is putting in the work for the flailing Cavs.

This looks to be a close game, whose outcome will likely be determined by the brilliance of any of the superstars on display. And Kwesé will have you be a witness on KS1 tonight.