The White House’s famous magnolia tree to be cut back 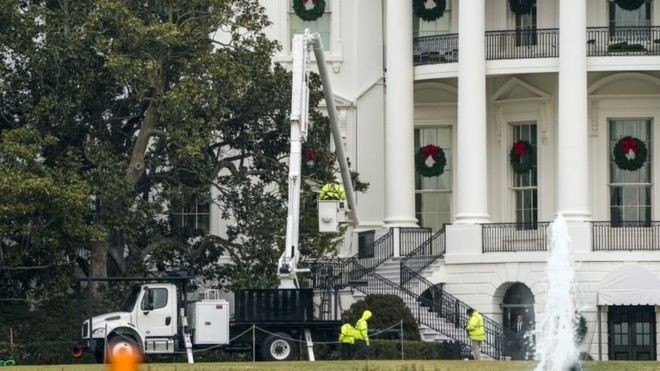 The White House’s famous magnolia tree to be cut back

A historic tree that has stood at the White House for nearly 200 years is scheduled to be cut back.

The “Jackson” magnolia was planted by President Andrew Jackson as a tribute to his recently deceased wife.

It has been a backdrop to historic ceremonies and even featured on the $20 note between 1928 and 1988.

But experts say the tree is damaged and poses a safety hazard. First Lady Melania Trump has called for a large portion of it to be removed.

White House spokeswoman Stephanie Grisham said Mrs Trump had requested that seedlings be maintained so that a new tree could possibly be replanted in the same area.

She said Mrs Trump had taken the decision because the tree posed a threat to “the safety of visitors and members of the press who are often standing right in front” of it when the presidential helicopter takes off.

The magnolia originally came from a cutting from Mrs Rachel Jackson’s favourite magnolia tree on the couple’s Tennessee farm.

Its first problems began in the early 1970s when a section of its base was displaced and its exposed cavity was cemented. This was standard practice for the era, but some said it damaged the tree irrevocably.

In 1981, the cement was removed and replaced with a large pole and cable system to hold it up.

Although at first sight the tree appears normal, a report from the United States National Arboretum, quoted by CNN, said “the tree is greatly compromised” and “completely dependent on the artificial support”.

The magnolia tree’s life has spanned 39 presidencies, as well as the American Civil War and two World Wars.

Chelsea Clinton, the daughter of ex-President Bill Clinton, tweeted her thanks to those who have looked after it over the years and to Mrs Trump for the re-planting plan.

Skip Twitter post by @ChelseaClinton
US tax bill: Republicans agree sweeping changes
Check out the Christmas tree brows which have become the beauty trend for the festive season
Trump’s Mar-a-Lago Thanksgiving
Trump Jr US President’s son hinted at review of Russia sanctions act, says lawyer A Russian lawyer has said Donald Trump Jr suggested in a meeting during the US presidential campaign that a law imposing sanctions on Russia could be reviewed if his father were elected.
Source: White House wanted to publicly shame Tillerson
President Trump signs new order to send American astronauts to the moon
Antonio Guterres Trump says UN boss doing ‘very very spectacular job’ US President Donald Trump jettisoned his past criticism of the United Nations Friday, as he lavished praise on the organization’s Secretary General.
‘Catalonia Is Spain!’ Crowd chants at Barcelona rally That was a reference to the decision by Catalonia’s two biggest banks to move their legal headquarters to other parts of Spain in recent weeks due to the political tension.
US to stop arming anti-IS Syrian Kurdish YPG militia – Turkey
Ogun State Commissioner for Commerce and Industry, Bimbo Ashiru resigns
Droptop In The Rain – Ty Dolla $ign Ft Torey Lanez
Trump-Russia Indictments, guilty plea in probe: What we know Two former Donald Trump associates were indicted Monday and it was revealed another has pleaded guilty to lying to FBI investigators, in the first substantial legal action stemming from the probe into Russia’s US election interference.
The 5 best/worst Trump Thanksgiving tweets
Broke ex-Arsenal star Emmanuel Eboue gets coaching job at Galatasaray, after losing all of his assets to estranged wife
US President to decide on North Korea terror list after Asia trip