Want to make a good living in sport?…Take up golf 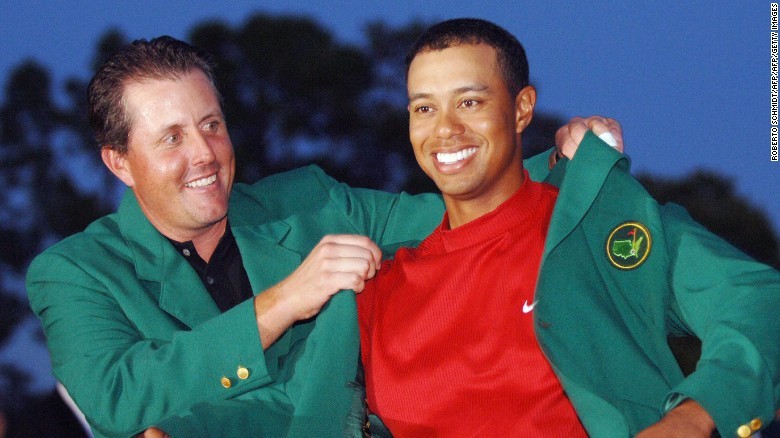 Want to make a good living in sport?…Take up golf

With Roger Federer and his rivals competing for a $2.6 million winners’ check at this week’s season-ending ATP Finals in London, tennis is certainly a lucrative sport.

But if you want to make millions out of a sporting career, perhaps your best bet might be to take up golf.
If you are a man, that is. For female athletes, tennis is by far more financially rewarding.
But before you quit your job and pick up a club or a racket, here’s a closer look at the numbers separating golf and tennis. 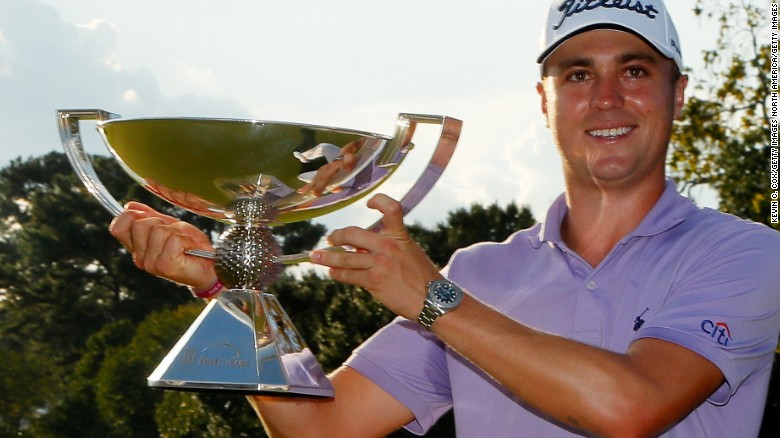 American Thomas is ranked No.3 in the world
Although the European season isn’t over yet, there are already 143 men who have won at least $1 million in prize money this year on golf’s PGA Tour in the US and the European Tour.
The 24-year-old American Justin Thomas tops the PGA Tour money list for 2017 with $9.9 million from competing in 25 events and winning five titles.
By contrast, 49 men have won at least $1 million on tennis’ ATP World Tour this season. Reigning French Open and US Open champion Rafael Nadal leads the money list with $12.6 million in on-court earnings.
Roger Federer may have won 19 tennis grand slam titles – the most out of anyone in the men’s game – and a whopping $109,853,682 in prize money, yet he still trails 14-time golf major winner Tiger Woods by $207, 330 in career earnings and former world No.1 Woods has not won a major since 2008. 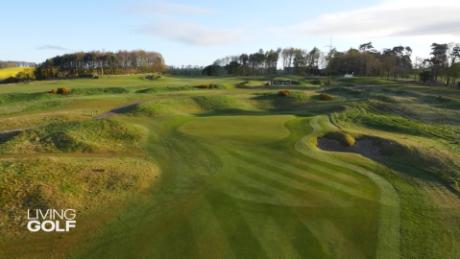 The world of golf course design 22:29
READ: Want your kid to become a tennis player? Prepare to spend big
READ: Woods gets green light to ‘do as much as he needs’
WATCH: Justin Thomas’ quickfire challenge

These numbers change when we compare women’s tennis and golf.
With the women’s tennis season now officially over, 37 players on the WTA tour made $1 million or more. That compares with just 16 on the LPGA Tour in the US and none on the Ladies European Tour. 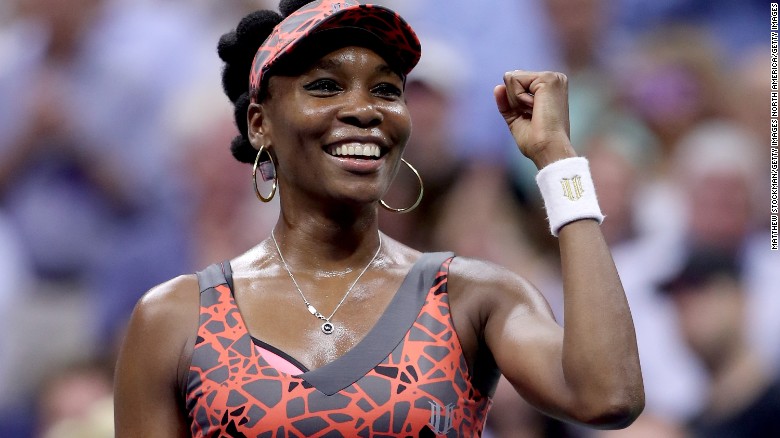 Venus Williams has won a Tour-leading $5.5 million in prize money this year.
Venus Williams topped the 2017 money list in women’s tennis, earning $5.5 million from reaching two major finals, at Wimbledon and the Australian Open, and finishing runner-up at the year-end WTA Finals.
South Korean golfer Sung Hyun Park, winner of the Women’s US Open, leads the LPGA 2017 money list with $2.3 million in prize money.
But even for female tennis players, life on the Tour is tough.
Take British tennis player Heather Watson, who has been on the women’s tour for eight years and earned more than $2.7 million in prize money.
That may sound like a lot, but a large chunk of that is spent on being on the road, Watson said in an interview in Wuhan, China last year.
Unlike team sports such as soccer, tennis pros are their own bosses, paying their own way to events and employing their own coaching staff. 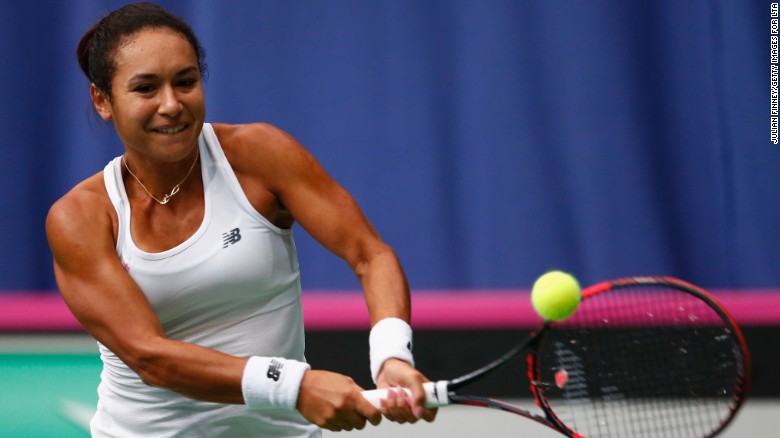 Briton Watson is ranked No.74 in the world
For example, Watson — who finished the season as the world No. 74 with $467,763 in prize money — said players have to be ranked “consistent Top 50” to be able to afford a full-time coach.
American golf agent Rocky Hambric, who has been in the business for four decades and represented 18 major champions, tries to sign players to his agency before they turn pro, at around 22 years of age.
Although there is “a long lead time” before golfers really start earning a good living, the pay-off can be “significant,” because they can play at a high level for a long time, Hambric told CNN earlier in the year.
READ: What’s it like to manage the “John Wayne of golf”?
READ: Golf great fights gender stereotypes in course design

With a sport so dependent on physical strength, endurance and recovery, tennis players have a limited window in their careers to which they have to make their money.
Golfers don’t have that kind of immediate pressure. 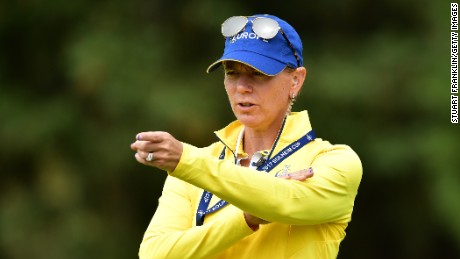 Course design ‘shouldn’t be gender question’ 01:54
Take American Steve Stricker who, despite being 50 years of age, still earned just over $1 million in prize money this year on the PGA Tour.
Being 50 also makes Stricker eligible to play on the lucrative Champions Tour, where 11 men have earned more than $1 million this year.
Female golfers over the age of 45 can compete in the Legends Tour. This season also saw the creation of the first senior golf major for women, with legends including Britain’s Laura Davies competing for a $600,000 prize money pot, including $90,000 for the winner, at the inaugural Senior LPGA Championship in Indiana in July.
Although former grand slam tennis champions of both sexes can play in invitational legends’ events at the four majors for money, the men’s Champions Tour, for players over the age of 35, offers no official prize money. There is no senior tour for female tennis players.
But for male golfers long past their prime, there is still serious money to be made.
Visit CNN.com/skiing for more news, features and videos
Take German legend Bernhard Langer, who was one of golf’s most prominent players in the 1980s and 1990s, winning the Masters twice and reaching the No. 1 ranking.
Now 60 and in the latter stages of his long career, he leads the Champions Tour 2017 money list with just over $3.6 million — which would rank him fourth on the men’s tennis tour, behind Nadal, Federer and Germany’s Alexander Zverev.
An alleged runs girl’s show of shame There are some things you should not just put out on social media.
12 Ways to Save Money and Add $5K to Your Bank Account This Year
2 Nigerian men jailed for £300,000 fraud in the U.K
Financial Tips Money lessons from 5 male celebrities Asides their rich lifestyle, some of these male celebrities have very frugal money tips they use in their every day lives. And we can take two or more lessons from them.
Olympic weightlifter sells his gold medal to raise money for Iran earthquake victims
AY Makun Comedian featured on CNN Marketplace Africa, talks hardships in Nollywood When asked about the impact of the recession in the country’s economy on business, AY noted that even his company suffered as did most companies in the industry.
‘My mother encouraged to travel to Abidjan for prostitution
Donald Trump US President tells Paris, Berlin to ‘keep making money’ via trade with Tehran US President Donald Trump said in an interview aired Sunday he does not object to France and Germany continuing trade with Iran, despite his refusal to certify the Iran nuclear deal.
Everton in hot pursuit for Onyekuru
Chigga Feat. 21 Savage – Crisis
FG to finalise recovery of $321m by December – Buhari’s aide
29 Latest Online Money Making Opportunities In Nigeria (2017)
Patience Jonathan’s N350m frozen
7 AMAZING tips on how to stop losing money
Exclusive Report: An Ordinary Student From Nigeria Earns $200 A Day While Staying At Home
Watch this runs-girl celebrating N100K pay off with nude video