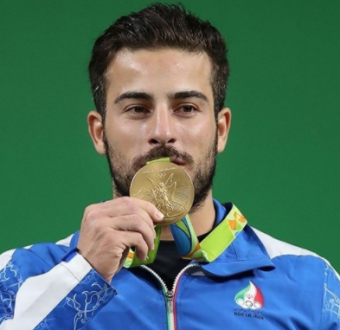 Iran’s Olympic weightlifting champion Kianoush Rostami has put his gold medal up for auction to raise money for the victims of Sunday’s earthquake that left at least 452 people dead in Iran and Iraq.

The 7.3-magnitude quake that struck in the remote border area between Iran and Iraq on Sunday left thousands of people injured hundreds of villages destroyed. The earthquake, the deadliest of the year, was felt as far away as Turkey and Pakistan.

Rostami, who won gold at the Rio de Janeiro games in 2016, says the disaster has left him desperate to help those affected.

He says, ‘I consider it my duty to take a step, however small, to help my beloved fellow countrymen who have suffered as a result of the quake. I am returning the gold medal, which is theirs by right, to my people. I will auction off the medal and use the proceeds to help the quake victims.”

‘My mother encouraged to travel to Abidjan for prostitution
Torrential rain who killed five people dead Four of the fatalities were young miners working in a pit that filled with water and the fifth a teenage girl who fell off a ravine.
AY Makun Comedian featured on CNN Marketplace Africa, talks hardships in Nollywood When asked about the impact of the recession in the country’s economy on business, AY noted that even his company suffered as did most companies in the industry.
18-year-old Russian student kicked out of college after viral video of her having sex at a club in front of everyone hits the internet
Powerful Iran-Iraq earthquake is deadliest of 2017
I Used to Take Marijuana, Codeine and Hard Drugs – Popular Nollywood Actress, Toyin Abraham
2 men arrested for murder of 26 Nigerian girls, women killed in In Italy sea
Goodluck Jonathan I’m always close to tears when Nigerians say they want me back – ex-President
Exclusive Report: An Ordinary Student From Nigeria Earns $200 A Day While Staying At Home
Tizeti partners Facebook to bring Nigerians affordable internet service The Express Wi-fi plans are affordable and range from N50 for 100MB to N2,000 for 10GB.
Donald Trump US President tells Paris, Berlin to ‘keep making money’ via trade with Tehran US President Donald Trump said in an interview aired Sunday he does not object to France and Germany continuing trade with Iran, despite his refusal to certify the Iran nuclear deal.